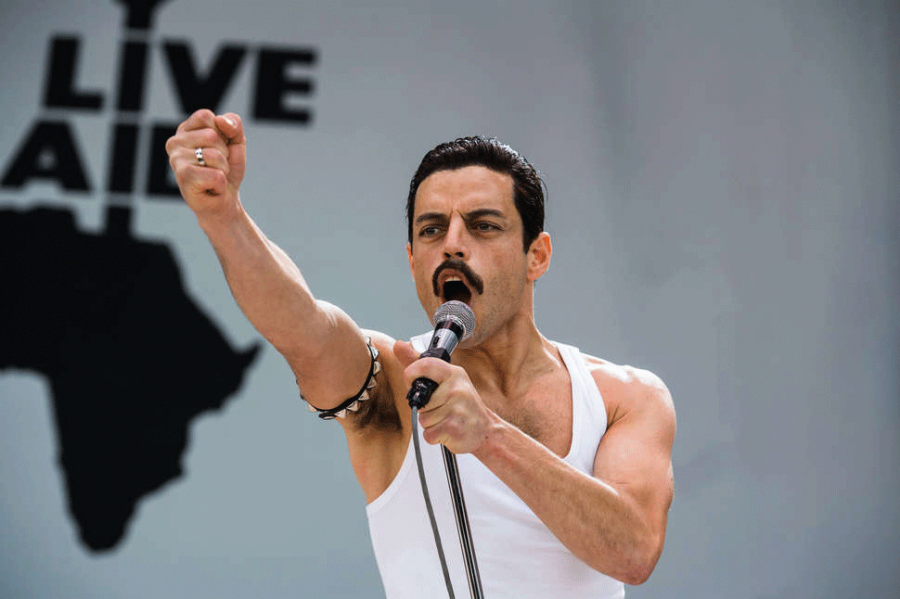 I have a distant memory of stomping and clapping to the rhythm of “We Will Rock You” on the way to elementary school field trips. That was my first exposure to Queen. Back then, I didn’t even know that they were the artists, or that it was a real song. For all I knew, it was just a chant. In fact, I didn’t even know the song “Bohemian Rhapsody,” until I looked up “greatest songs of all time” on the Internet. So I listened to it, and it struck me as really bizarre. Honestly, I didn’t like it at the time. Then in high school, my band teacher was obsessed with Queen, so we played a medley of Queen songs at one concert. After that, I started listening to the band’s greatest hits, and realized that for all its weirdness, there was something really epic and grand about “Bohemian Rhapsody.”

My familiarity with Queen is still very limited. Yet, I know and can acknowledge that the band—and particularly lead singer Freddie Mercury— is legendary.

The film has been in the works since 2010. Sacha Baron Cohen was initially cast as the lead, but he dropped the project over “creative differences.” Queen’s Brian May and Roger Taylor, the film’s creative and musical consultants, were concerned with preserving their band’s legacy. Cohen said that they weren’t willing to show the “warts n’ all” of Mercury’s life. Interestingly enough, Mercury originally was going to die in the middle of the movie; the rest of the film would follow the band’s recovery and journey after such a huge loss.

The film that made it to the screens seems to be quite different than once imagined. For one, the remaining members seem to have changed their mind—Mercury, portrayed by Rami Malek, remains the focus throughout. We see him in his youth as a college student, working as a baggage handler at Heathrow Airport. His name at this point is still Farrokh Bulsara, a marker of his Parsi ethnicity. He is a fan of the local band Smile, and seizes the opportunity when their lead singer quits to join Humpy Bong. They reject him at first look of his teeth, but immediately hire him once he starts singing. Eventually, the band—renamed Queen—is able to land a contract with EMI Records. At this point, Bulsara legally changes his name to Freddie Mercury.

Malek does a fantastic job portraying Mercury. He captures Mercury’s onstage charisma and distinct accent. Based on a couple of interviews that I’ve watched, Mercury is a lot more “ordinary” than I expected, at least in comparison with Malek’s heightened performance. He instead focuses on capturing Mercury’s extraordinariness, eccentricity and icon status. And he does it well. Additionally, he conveys Mercury’s loneliness, isolation and

internal conflict with his sexuality. This could and should be Malek’s breakout role—he proves that he’s just as good on the big screen as he is on the TV show “Mr. Robot.” Much about the legend, however, is left unsaid or unclear, as perhaps it should be: Mercury himself was a remarkable mystery of a man.

I’m curious to see what the film would have looked like had it dealt with the aftermath of Mercury’s death. Despite the movie being a tribute to Queen, the other members are uninteresting side characters. It appears that their own personalities are brushed aside so Mercury can shine. Unfortunately, everyone besides Mercury is more or less one-dimensional. The film has received some other negative reviews for shying away from Mercury’s sexuality, the AIDS epidemic, etc. I sort of agree—the producers could have taken bigger risks. What we’re left with is a very ordinary biopic, of an indescribable, larger-than-life figure. Without Malek’s performance, the movie would ring much more hollow. But watch it for the music. We’re ultimately reminded of the power, nostalgia and inspiration of anthems like “We Are the Champions.” We’re reminded of the way Queen defied all boundaries and defined new ones, only to subvert them again. The movie might play it safe, but it doesn’t forget that Queen never did.