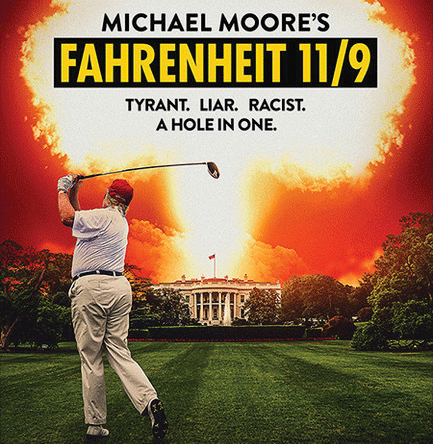 A new documentary by Michael Moore showcases distaste for the Trump presidency and parallels the reality of our current political culture.

Renowned filmmaker Michael Moore is back with his documentary, “Fahrenheit 11/9,” which primarily revolves around Trump’s presidency and its impact on the nation and the world. If you know anything about Moore and his work—or if you have seen the trailer—then you would know that he is not a fan of the Trump presidency. The title of the film refers to the day it was announced that Trump won the election; it also alludes to and reverses the title of Moore’s signature film: “Fahrenheit 9/11.” The 2004 film and highest-grossing documentary of all time berated the Bush administration and caused intense controversy, so one should not expect any less with Moore’s latest production. According to Brian Tellerico of RogerEbert.com, the film’s message is simple and effective: “get mad about something and do something about it.”

I think that quote sums up the movie pretty well. To be honest, I spent most of the movie crying—out of frustration, anger and sadness. I tried hard to keep my composure, but I failed miserably. The movie was difficult to watch. I was absorbed and wanted it to be over at the same time. That isn’t to say “Fahrenheit 11/9” is a tragedy or tearjerker. There were some undoubtedly funny moments as well, so I shed some tears of laughter as well.

The documentary begins with footage of the doubts many prominent figures expressed around the possibility of a Trump presidency; it is quickly followed by the shock, disappointment and despair that surrounded the night of the election, as Clinton’s electoral vote counts were slowly but surely surpassed. It took me back to the night as well: I was doing homework pretty late, and I finally finished my homework around 3 a.m. I didn’t watch the results live; I was confident that my vote would be in the majority. Once I was in bed, I opened a text from my friend and my heart skipped a beat when she exclaimed disbelief and fear for the new term. I could not sleep that night, thinking to myself: Is this really real? Interestingly, Moore’s name was mentioned in news reports the following day: as a Flint, Michigan native, he warned people to dismiss Trump at their peril.

That day was almost two years ago, when I was a first-year at Colgate. Now I look back at the whirlwind of events that have shaped our political atmosphere and stained everything alongside it. The film goes on to illustrate how Trump’s offensive and bigoted behavior has been hidden in plain sight from the beginning of his career. Moore asks, how did we not see it then? He then delves deeply into prominent movements, including March for our Lives, West Virginia’s teacher strikes and Flint’s ongoing water crisis. By hitting us one film after another with the devastation and inspiration produced by these events, Moore forces us to confront the fact that our country is far from reaching the ideals it claims to serve.

No one is safe from Moore’s pointed attacks. Not even Obama. While he clearly takes a stance against the current president, Moore doesn’t pour his political support on any one figure. Rather, he demonstrates that everyone in the system, and the system itself, are responsible for the plight we see today: a failed democracy in which its citizens lack a real sense of power. Moore makes it clear that inaction will get us nowhere: we must take action and become the solution.