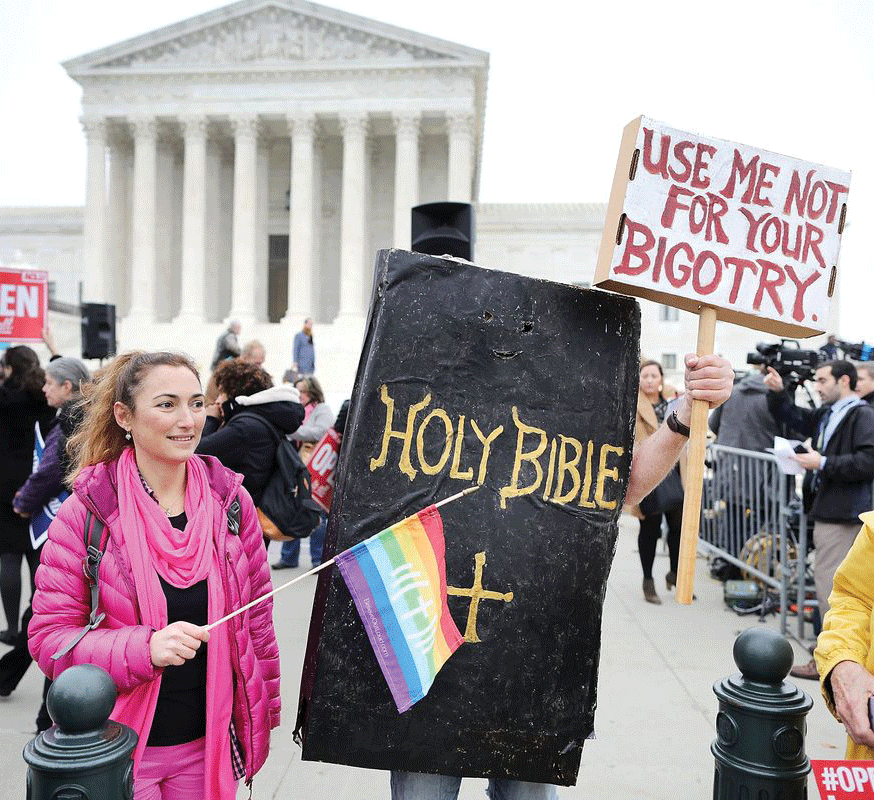 Protestors outside the Supreme Court Building in Washington D.C. in December 2017.

The debate was sponsored by the Program in Constitutional Government and the Center for Freedom and Western Civilization as part of an annual recognition of Constitution Day on campus.

The first visiting participant was Professor of Law at Georgetown University David Cole, who also serves as the National Legal Director of the American Civil Liberties Union (ACLU) and was the legal counsel to the gay couple involved in the Masterpiece Cakeshop Supreme Court Case.

Cole debated Professor of Political Science at Louisiana State University James R. Stoner, who has received international recognition for his work in American Constitution’s common law background and the repercussions of this Supreme Court decision.

The debate was organized into two rounds. Round one was 12 minutes per speaker and round two was six minutes of rebuttal per speaker.

The Supreme Court decided on the Masterpiece Cakeshop Case in June of 2018.

In December 2017, Jack Phillips, owner of Masterpiece Cakeshop, was tried in the Supreme Court after he refused to bake a wedding cake for a gay couple on the grounds of his First Amendment right: the freedom to practice religion. The gay couple, represented by the Colorado Civil Rights Commission, claimed that this treatment infringed on their Fourteenth Amendment right, which ensures all citizens are to be treated equally under the law. In June 2018, the Supreme Court ultimately ruled in favor of Phillips on the basis that the Colorado Commission’s arguments throughout the hearings demonstrated a disposition against religious practices.

Cole opened the debate with the assertion that objections should not be the basis of whether or not an individual follows the law. He claims that businesses open to the public have to abide by public law without exception. Cole stated that this case is a gateway to other objections that could potentially affect other marginalized groups.

Cole’s argument relied upon the equivocation of race and sexual orientation while appealing to human emotion and morality. Phillips claimed in Court that cake making is a form of expression, but Cole argued that the word “expression” is narrowly subjective and allows for cherry picking to take place. Cole argued that the public law is neutral and non-discriminatory, which means all people need to accept it.

In contrast, Stoner stated that the Court did not rule on the broader issue of “equal marriage,” but rather on the issue of religious practice. Stoner recounted that America was built on religious tolerance and the seeking of religious refuge.

Stoner continued his argument, and stated that an individual cannot be forced to work unless they want to work. Stoner made the case that there is a difference be- tween public and private agreements. A catering company may be publicly criticized, but it also may pick and choose who its clients are; businesses do not have to disclose exact reasons as to why they made the decision to deny service to any particular customer.

Stoner emphasized that cakes sold from a supermarket are mass produced for public use, whereas cakes made by bakers in private locations are personalized for individuals, not for mass distribution. In closing, Stoner argued that if lawyers can pick their clients, why then bakers should be able to as well.

After both sides presented their arguments, there was a question and answer session. Cole stated that any discrimination on identity is not permitted under public law legislation in Colorado and under Federal law. Businesses in the public forum need to abide by non-discrimination laws regardless of personal objections.

In response, Stoner agreed that non-discriminatory laws should be upheld, but contrary opinions can be formulated nonetheless. Stoner added that bakers are private artisans that are providing a personal service and should not be forced to participate in ceremonies or celebrations that infringe on their First Amendment rights. Stoner concluded with the statement that “being gay is unsustainable and that in thirty years there will be no gay marriages.”