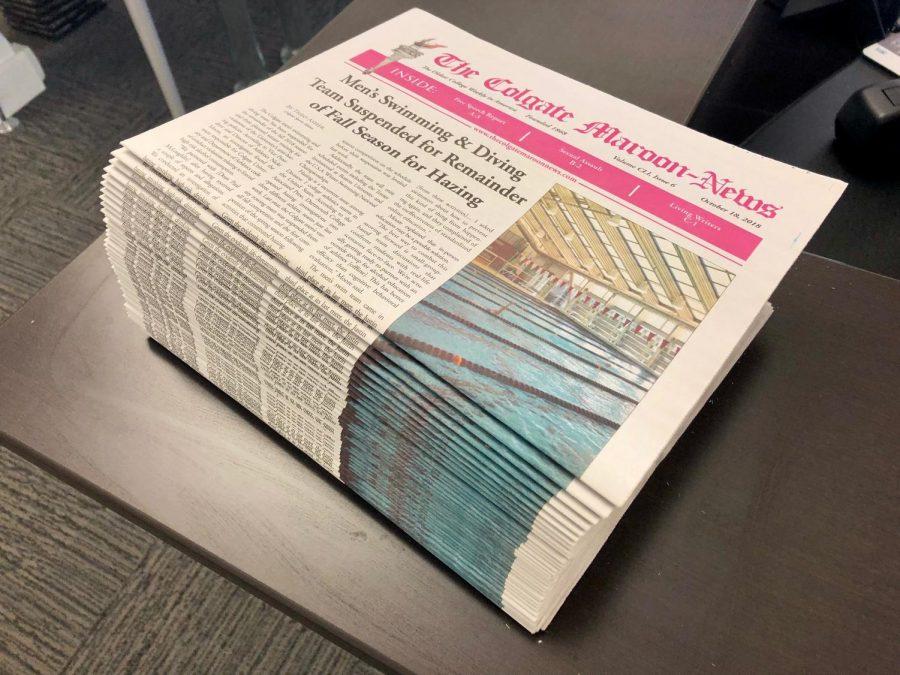 A stack of Maroon-News copies remains at Benton Hall after nearly 1,000 copies of the newspaper disappeared from their drop-off locations on Friday, October 19.

Nearly 1,000 copies of this year’s sixth edition of The Maroon-News disappeared from their campus drop-off locations on Friday, October 19, the day after they were distributed. With suspicious activity suspected by students, Maroon-News staff and faculty members, a Campus Safety investigation is now underway to identify the person or people responsible for the papers’ disappearances.

Maroon-News delivery person, senior Talia Greenblatt, said she made all paper deliveries – to 17 campus locations and seven downtown Hamilton locations – between 1 p.m. and 3 p.m. on Thursday, October 18. The next day, she noticed the stacks she had dropped off missing from Lathrop Hall, Olin Hall, Persson Hall, Hieber Café and the O’Connor Campus Center.

“I was shocked on Friday morning to see there were no stacks of newspapers in multiple buildings,” Greenblatt said. “I had delivered large stacks to each location not even 24 hours earlier, and during the delivery had to remove old papers left over from the week before. So it was weird that Thursday’s papers would have already all been read by Friday.”

Rob Capuano, the manager of borrowing services at Case-Geyer Library, also noticed a lack of papers on Friday.

“They’re normally dropped in the entrances but when we came in Friday morning there were none anywhere.” Capuano said. “We never saw them and we didn’t get a chance to grab a copy like we normally do to keep behind the circulation desk.”

Capuano was not the only staff member to note the lack of papers in their usual locations.

“I had been waiting for the next Maroon-News issue to arrive in Alumni Hall,” Administrative Assistant of the Division of Social Sciences Erin Conway said. “However, as the days passed I started to wonder what was taking so long, as I usually snag a copy for myself and the History Department.”

Papers did not entirely disappear, remaining at drop-off locations such as Benton Hall and Merrill House.

Though papers are free of charge for students and Hamilton residents, the disappearance of the papers before they could be read by their intended readership comes at a cost. Approximately 78 percent of the Maroon-News’ budget is allocated toward printing and distribution costs. Each edition of the paper costs $1,407 to print and distribute.

The sixth issue of the Maroon-News was uniquely pink in color, instead of its usual maroon, to raise awareness for Breast Cancer Awareness Month and to encourage readers to donate to the Breast Cancer Research Foundation.