Even in a Loss, Patrick Mahomes Proves He is the Real Deal 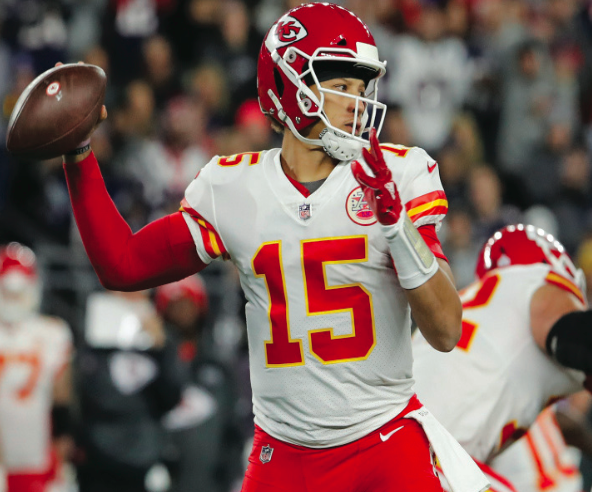 Rarely in football are there good losses. However, that is how one could describe the Kansas City Chief ’s performance in primetime on Sunday October 14, which resulted in their falling to the New England Patriots 43-40.

The entire football world had their eyes trained on Gillette Stadium to see if Kansas City Chiefs quarterback Patrick Mahomes could further cement his status as an MVP candidate against the Patriots, who have consistently befuddled young quarterbacks throughout the Bill Belichick era. Entering the fifth week of the NFL season, Mahomes had thrown for an NFL leading 14 touchdowns while throwing for over 300 hundred yards in every game.

Despite all of these accolades, there were some who still refused to jump on the Ma- homes bandwagon. After his first three impressive games against the Chargers, Steelers and 49ers, many pundits were intrigued but wanted to see whether the rookie could perform that well against elite competition.

The next three game stretch against the Denver Broncos, Jacksonville Jaguars and New England Patriots would provide a test for Mahomes against three quality NFL defenses. He passed his first test with flying colors, leading his team to two touchdown drives in the last seven minutes to earn a hard-fought victory over the division rival Broncos 27-23 on October 1. He then returned home the following week and, with the help of the Chiefs’ best defensive showing of the year, thoroughly handled the Jacksonville Jaguars’ vaunted defense with a 30-14 rout on October 7. While those two wins were extremely impressive, one more difficult road test awaited Mahomes and the Chiefs: beating Belicheck and Brady. Bill Belichick has had one of the great track records against rookie quarterbacks, so much so that he has never lost to one at home as the head coach of the Patriots.

The game started out for Mahomes as many rookies will start out against Belichick’s defense. Coming into the game with a mixture of nerves and excitement, Mahomes overthrew Kareem Hunt on the identical route that Hunt scored on last year in the opener against New England, and this one would have surely gone for a touchdown as well, as Hunt had middle linebacker D’onta Hightower beat.

Later that same drive, Mahomes again threw a pass just over the outstretched hands of Tyreek Hill as the ball sailed over the end zone and the Chiefs settled for a Harrison Butker field goal. The next drive was even worse for Mahomes, as D’onta Hightower exacted his revenge by picking off Mahomes on a well-designed zone blitz. After only adding two more Butker field goals before halftime, the Chiefs found themselves down 24-9 and in need of a spark coming out of the locker room to start the second half.

Mahomes was ready to provide that spark. After settling down from his mistakes in the first half, Mahomes came out guns blazing in the second half leading five scoring drives, including four touchdown passes without throwing a single interception, eventually tying the game at 40 all with just over three minutes to play. Unfortunately for the Chiefs, anyone who knows football knows that giving Tom Brady the ball back with three minutes left in the game is a recipe for disaster. Sure enough, Brady led one of his classic methodical drives, culminating with a 28-yard field goal as time expired.

Despite the loss, the game was certainly a positive experience for Mahomes. After struggling for most of the first half, he reminded the world in the second half why he has drawn comparisons to Super Bowl winning and Hall of Fame Quarterback Brett Favre. With his gunslinger mentality and his ability to shake off a rough half against arguably one of if the not the greatest football coach of all time in Belichick, Mahomes once again proved that he is without a doubt, the real deal.