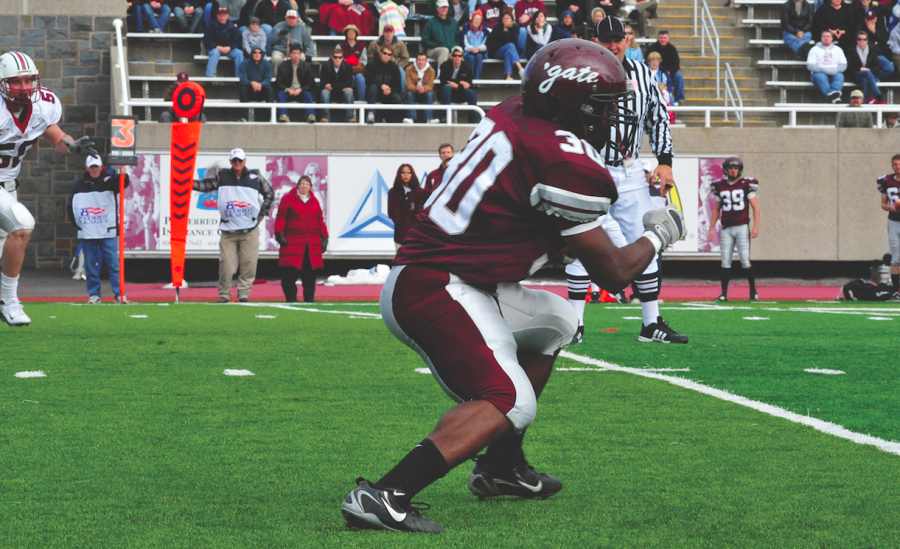 The #13-nationally ranked Colgate Raiders football team faced their long-time rival, Cornell, and came away with an outstanding performance, winning 31-0. This was Colgate’s 100th football meeting against Cornell, which made this win a spectacular milestone for Colgate and the football program. This was the team’s third shutout of the season and their first shutout victory over Cornell since 1919. The score in 1919 was 21-0.

This third shutout makes Colgate the first Patriot League team in history to post three shutouts in one season. Yes, you read that right. Colgate now leads the nation in scoring defense at 3.8 points per game and is at 6-0 for the first time since 2009. To call this start “impressive” would be a gross understatement.

Some key players of the day were the three starting linebackers for the Raiders—senior T.J. Holl, junior Nick Ioanilli and senior Dillon Deluliis all recorded double-figures tackle totals, personal career highs for all of them.

“We still didn’t play a perfect game; we have a lot of room for improvement. But we were able to execute the game plan very well and that allowed me to be able to make a lot of tackles today,” Holl said.

Another standout from the dominant victory was senior running-back James Holland Jr. who scored a touchdown both rushing and receiving. He ended the game with a total of 119 rushing yards and 33 receiving yards. Sophomore Grant Breneman completed another 200-yard passing game, a very impressive feat. He also rushed for a 21-yard touchdown to boost Colgate to 24-0 by the end of the third quarter.

Holland offered some feedback on his starting quarterback.

“Grant has been looking at us a lot more this year. There were glimpses of it last year but we’ve been taking advantage of it this year. Every practice, the running backs are working on catching the ball,” Holland said.

A key play for the Raiders was made by senior defensive back Tyler Castillo who had an incredible interception towards the end of the game, allowing the Raiders to finish out the game strong with a well-deserved victory. This makes Castillo the Patriot League’s active interception leader with 11 interceptions, he is tied for ninth on the all-time Colgate interception chart records.

Castillo commented on his play that busted the game open.

“To be honest, I don’t know why the quarterback threw that pass. I broke on the ball before it was even thrown; I read the route. I just saw there was green grass in front of me and took it back for six,” Castillo said.

“I’m running out of words to describe our defense. We were just real resilient.

Cornell did a nice job running the ball on us a little bit, particularly on first down in the first half. The defense was never rattled, never worried—nobody panicked.” Hunt said. “They came back and made the plays when they had to and got some key turnovers when they needed to. Again, just really solid fundamental defense and a good team win.”

Colgate is excited about the momentum from this win and is ready to hit the ground running in their next game against Georgetown on October 27, senior day. This should be a challenging matchup as Georgetown is 2-0 in the Patriot League and 3-4 overall after having a big win on Saturday against Lafayette.

No matter – Colgate Raider football is flying high. Their 6-0 record has earned them the apt #13 ranking in the NCAA FCS poll, one of only two remaining undefeated teams in the nation.