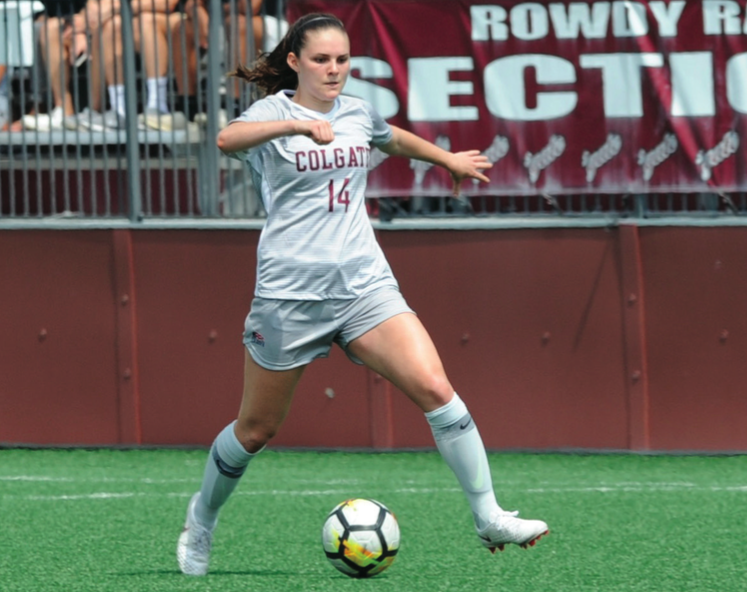 Colgate women’s soccer has been playing lights-out recently, continuing their dominance with shutout wins in their past two matchups against tough opponents, Holy Cross and Boston University. Against Holy Cross on October 17, with just four minutes to play, freshman defensive midfielder Emily Amano came through in the clutch and scored the only goal of the game, giving the Raiders a 1-0 victory. Sophomore midfielder Sage DiGiulio was a key contributor to this goal, setting up Amano with a long pass. Amano tracked down the ball near the top of the box and buried the ball into the back of the net to seal Colgate’s sixth straight win.

Colgate’s defense played outstandingly in this game as well, keeping up their scoreless streak to an impeccable 360 minutes. Junior goalkeeper Kelly Chiavaro had another great game, recording four saves, three that were in the first 28 minutes of the match. Colgate’s head women’s soccer coach, Kathy Brown, commented on the team’s performance.

“It took us a while to get going and that is a credit to Holy Cross. They took us out of our game a little bit but we never gave them anything too dangerous. We are happy we were able to crack the code late in the match and fortunately Emily Amano was able to come away with the late finish,” Brown said.

She also spoke specifically about the strong defense, which has only allowed seven goals all season, almost half the amount of the next closest team in the league.

“Our defense is so solid. I felt our defenders stepped up tonight. Their personalities came out a little more at a time when we needed them. It was one of the hardest games we have played yet this year and to be able to find a way to win is encouraging,” said Brown.

Colgate ran with this momentum and executed yet another incredible game on October 20. Junior attacking midfielder Mara Cosentino scored in double overtime with just 1:23 left to play to beat Navy 1-0. Sophomore forward Ellis Miller crossed in an excellent ball for Cosentino who was able to bury the goal for the Raiders. This win was huge for Colgate as the two teams are currently #1 and #2 in the Patriot League. Colgate still remains unbeaten in Patriot League play with one game left in the regular season. Colgate is now on a seven-game winning streak and 12-game unbeaten streak.

Many key players for the Raiders helped secure the win. On the defensive end, Chiavaro had an incredible performance, finishing the game with four saves and securing yet another shutout. Chiavaro pulled through in the final minutes, making an outstanding save in the 86th minute to stop Navy’s Baseley McClaskey’s shot. Chiavaro commented on the team’s play.

“Yesterday’s game was such a fun game to play. We knew we had to win to stay in first place and Navy came out ready to take first place from us. Winning in OT is always a good feeling. We’ve been working hard all season and it’s paying off. Yesterday showed us that we can compete against top teams and we’re ready to beat Boston University next Saturday for the first time, and be the regular season champions.”

This stunning seventh victory in a row puts Colgate at an elite record of 11-2-3 overall and 7-0-1 in Patriot League play. Colgate finishes out their regular season next Saturday, October 27 with a huge matchup against Boston University, their final Patriot League opponent. Kickoff will begin at 12:00 pm on Beyer-Small ’76 Field. This is the final game for the team’s five seniors as they complete their Patriot League careers.