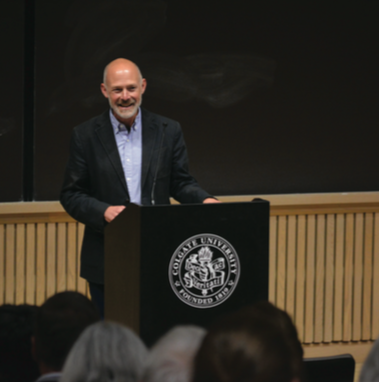 The fifth writer for the Living Writers Series speaks on absurd writing during his visit to campus.

Prolific satirist Brock Clarke visited Colgate University on Thursday, October 19 as the fifth author in the Living Writers series. Students and faculty gathered in Olin Hall to hear him speak about his 2014 novel “The Happiest People in the World” and read excerpts from some of his newer works.

“The Happiest People in the World” tells the story of the intertwining lives of Jens Baedrup (Henry Larsen), a Danish cartoonist who flees to upstate New York after an attempt on his life, Locs who is really Lorraine, a rogue spy meant to protect Henry but really wants him dead and Matthew who loves Lorraine while remaining committed to his failing marriage and Lawrence who is really Capo, Matty’s brother, who runs a CIA recruitment agency in Broomseville where Henry now works as a guidance counselor. If it’s not already confusing enough, even more characters with double identities exist, blundering their ways through a world brimming with espionage, surveillance and guns… lots of guns.

Having temporarily lived in Denmark, the proclaimed home of the “happiest people in the world,” Clarke wanted to trans- port a Dane from Skagen into his milieu of upstate New York, what he calls a home to “the unhappiest people in the world.” Despite the unhappiness, loneliness and failed dreams of the small-town residents of both Broomseville and Skagen, the novel strikes multiple poignant notes about relationships, the true meaning of happiness and the many faces of hope that can exist within a less-than-ideal world.

Most of Clarke’s work straddles that delicate border between comedy and empathetic emotional depth.

“In order to make absurdity worth something, it has to be grounded,” Clarke said.

Clarke read an excerpt from his upcoming novel “I Am Calvin Bledsoe” which maintained that thread of absurdity. In the novel, a pellet-stove blogger deals with the loss of his mother, a preacher and writer obsessed with John Calvin who filled his childhood with the religious figure’s doctrines. At the funeral, the mother’s estranged twin sister arrives to throw a wrench into the plot that is the narrator’s already quacked-out life.

In the vein of heart-warming emotion, Clarke concluded the lecture by reading his short story, “Good Night,” an ode to a father’s love for his son despite the little annoyances that seem to get in the way. The story came from his recently released collection “The Price of the Haircut,” which is full of similar pieces.

During the Q&A which followed, Clarke took questions from the audience, discussed his craft, inspiration and own unique writing style. Throughout the talk, he kept the conversation light-hearted with a humorous sensibility and witty observations. As a speaker, he stayed true to the tone and message that make his work so compelling.