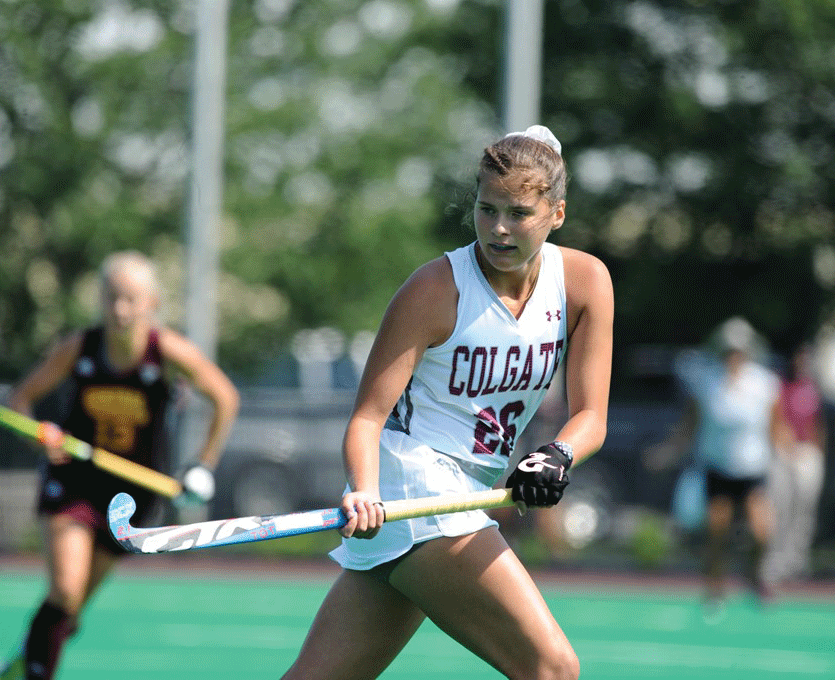 The Colgate Field Hockey team had quite an eventful week, facing off against the Pacific Tigers and Boston University Terriers. The Raiders hosted Pacific on Thursday, September 20, at home on Tyler’s Field. They entered the game with a 2-5 record for the season thus far, their sights set on making Pacific the third team to fall to their offense, along with Central Michigan and LIU Brooklyn.

The first half was met by a strong Tigers offense, who scored the first goal of the game 14 minutes into play. The Raiders did not take too long to answer their opponents back, with a goal by junior Remi Filippini tying the score at 1-1, 27 minutes into regulation time. The goal was Filippini’s first of her career, assisted by sophomore Taylor Casamassa. The Raiders’ powerful offense wasn’t anywhere near done and struck once again, three minutes later. The goal, scored by sophomore Meghan Minturn, made the score 2-1 in favor of the Raiders, allowing them to claim their first lead of the game.

Unfortunately, the second half brought with it a vengeful Tigers team, who scored an unanswered 4 goals, leading to a final score of 5-2. The loss dropped the Raiders’ record to 2-6 heading into their game against Boston University only a few days later.

Despite the loss, Coach Cornell was excited by the improvements seen in this game by her offense.

“I think for both strikers, it was a really good breakthrough moment in the season. I know [Filippini and Minturn] both have been working extremely hard. All season we’ve worked on connecting and on getting quick shots off, and work- ing on getting themselves into good, dangerous positions in the attacking circle,” Cornell said.

“I think their fortitude and composure in the circle really showed today to be able to execute in the way they did. Since those are things we have been working on all season, it was certainly great to see them do that today.”

Later on in the week, on Saturday, September 22, Colgate took on the Terriers in Boston, MA, looking to snap their six game losing streak. Facing a team ranked 21st in the NCAA with a 5-3 overall record, the Raiders had their work cut out for them.

Taking advantage of a slow-starting Colgate defense, the Terriers were able to score two goals in the first half. Although they came out recharged in the second half, preventing BU from putting the ball in the back of their net, the offense was unfortunately unable to capitalize on any of their shot attempts. The match ended that way, with the Terriers taking the vic- tory over the Raiders 2-0. This was Col- gate’s second Patriot League game of the season, the first of which was a 6-0 loss against Bucknell.

As a result, their overall record shifted to 2-7, and their Patriot League record sits at 0-2. Despite what their record shows, Cornell took pride in the team’s performance against the Terriers.

“Today was a great step for our program, we competed a full 70 minutes against a talented BU team. We made adjustments throughout the game and the team remained composed under pressure. Our goalie and backline were very steady and made some outstanding plays that fed the team’s confidence,” Cornell said.

The Raiders will be tested again on Tuesday September 25 when they travel to Ithaca, NY to take on the Cornell Big Red on Dodson Field at 4:30 p.m. Their next Patriot League competition will be on Saturday, September 29, at home against the Holy Cross Crusaders. The game begins at 12 p.m. on Tyler’s Field, so go supports the women’s hockey team as they open the Patriot League season.