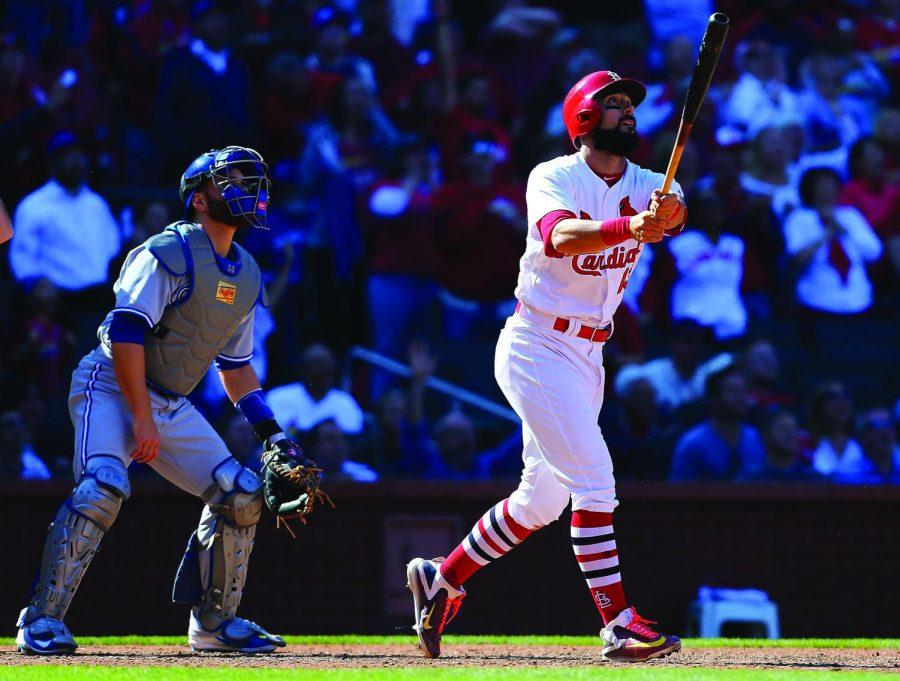 Matt Carpenter, with 35 home runs and a .272 batting average, has ignited the Cardinals offense and is making a case for NL MVP along the way.

Your coach, though unpopular, was just fired after his third dismal season in a row. Your highest-paid pitcher has seen the mound in a meager four games. The outfielder you were hoping to rely on to hold together a strong offense has seen his score of injuries throughout the season and has performed well below his pay grade.

One of the guys you have always counted on to offer that leadoff hit instead batted .155 for the months of March and April. Now imagine that your team, despite all of this— sits in possession of a wild card spot with a game of separation from the next-threatening team even after going a mediocre 2-3 over their last five games.

This team, the St. Louis Cardinals, has done something that other squads have tried and failed to do: turning a broken team into a potential playoff contender with just a few new ingredients. The screaming headline of the season is that the Cards let their longtime manager Mike Matheney go in the middle of the season, an action the club had not taken since 1995, when the let Joe Torre go.

Since taking over the helm first in an interim and then permanent managerial position, Mike Shildt turned the ailing organization from a team that hardly beat .500 on the year to a surging threat that has upped its winning percentage in the second half of the season to a respectable .625.

Much of what has made the Cardinals so great for baseball fans looking for drama is the club’s strongest hitter, Matt Carpenter. Carpenter, now batting a strong .272 with 35 home runs, has electrified the rest of his squad and made a case for MVP, resulting in one of the more impressive stretches in the MLB this season. The Cards won ten straight series until falling two games to one to the Cincinnati Reds as August turned into September. This stretch seemed an impossibility after the incredibly mediocre first half of the season that Mike Matheny’s Cardinals posted.

The most exciting part of the Cardinals play has certainly been its star outfielder, Harrison Bader.

Bader, whose speed now regularly turns singles into RBIs (even from first base), is even more exciting with his glove. Bader has consistently ranked among the very top defensive players in five star catches and defensive runs saved. The Cardinals have been lucky to have Bader to pick up the slack of outfielder Dexter Fowler—perhaps the biggest disappointment of the 2018 season for Cardinals fans.

Rounding out the outfield are stars Marcell Ozuna, Tyler O’Neill and now, Jose Martinez (that is, since Carpenter took over first base rights from Martinez). Ozuna has come into a groove in the second half of the season, bringing his numbers more in line with what the Cards expected of him.

O’Neill, who looks like he spends very little time outside of the gym, has hit seven homers and has been a decent bat and glove this year. Despite Fowler’s troubles and Ozuna’s less-than-desirable start, the St. Louis Cardinals outfield has turned into something to fear.

If you would have told Cardinals fans that it would be Miles Mikolas (who came to the Cardinals this offseason after a long jaunt in Japan) not Carlos Martinez that would be headlining this year’s rotation, most would not have believed you.

Instead, Mikolas is 14-4 on the season and the Cardinals strongest pitcher. Mikolas is backed up by the likes of other unlikely leaders, Jack Flaherty (8-6), John Gant (6-5) and Austin Gomber (5-0).

Neither Carlos Martinez, nor the Cards highest paid pitcher, Adam Wainwright, has seen many starts. But the young guys have stepped up in a way nobody could have foreseen.

In the bullpen, things have not gone quite as smoothly, though guys like Bud Norris and Jordan Hicks have done just enough to make the Cardinals remain a menace deeper into games.

Hicks, who until this year played no higher than High-A baseball, throws the fastest fastball in the majors (105 mph) and has been a threat the entire season.

All of this, and the Cardinals likely Hall-of-Fame catcher Yadier Molina’s name has yet to be mentioned in this article. While the season could go in any number of directions, baseball fans might hope to see this firebrand Cardinals team make some noise in the playoffs.

While conventional wisdom suggests the American League is impenetrable, it might take the “Cardinal Way” to dethrone the likes of the Boston Red Sox or New York Yankees.

However, it’s not like the organization is any stranger to unexpected, thrilling postseason success.

This is a sports opinion piece.