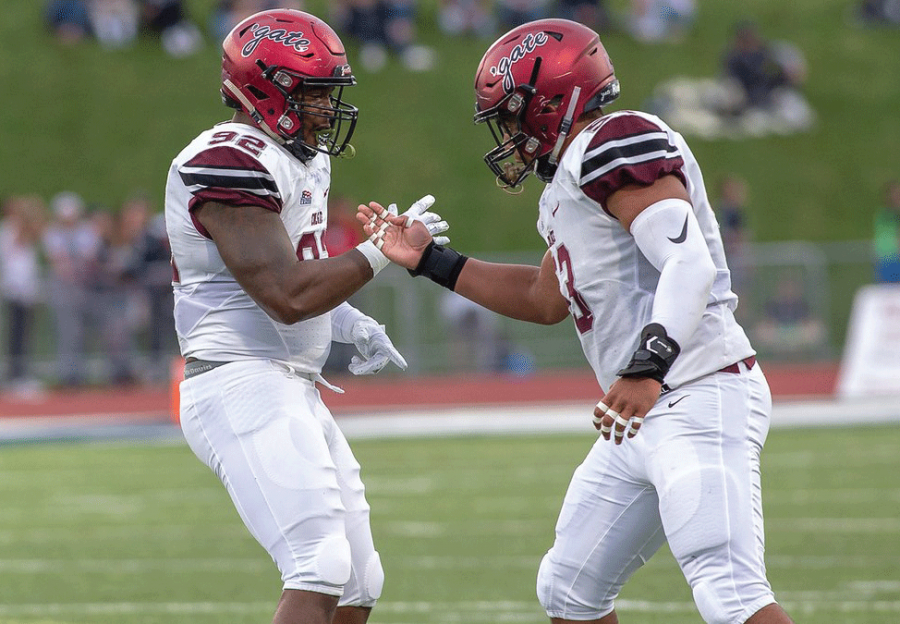 The Colgate men’s football team remained undefeated with an impressive 10-3 win over the University of New Hampshire (UNH) on Saturday. The win puts Colgate’s record at  2-0 for the first time since 2009. The Raiders were able to capitalize on momentum coming into this game after defeating Holy Cross last weekend 24-17. Colgate’s win snapped a number of New Hampshire’s streaks; the Raiders also held the Wildcats to their lowest home-field point total since 2010. This win was incredibly important for Colgate as New Hampshire began the season ranked in the top-10 of the Division I FCS poll, but now carries a record of 0-2.

The first quarter of the game was slow, but the hard-hitting action picked up in the second quarter. Senior linebacker Dillon Deluliis had a phenomenal play minutes into the second quarter by forcing a fumble that was recovered by fellow senior linebacker T.J. Holl. Then, with 10:05 remaining and facing 4th and goal, Colgate’s offense broke through as sophomore starting quarterback Grant Breneman ran the ball into the end zone to put Colgate up 7-0.

Junior linebacker Nick Wheeler had a stellar performance on defense for Colgate. His final stat line boasted 10 tackles and a phenomenal three sacks, including a strip-sack deep in Colgate territory. These three sacks were a single-game career high for Wheeler. Wheeler was humbled after his Von Miller-esque performance.

“It wasn’t just the quarterback, but the whole offense. We focus on flying around, being physical and playing with a lot of effort and attitude. Two words we use to describe ourselves is a bunch of runners and hitters, and that was the philosophy we wanted to play with this week,” Wheeler said.

Senior running back James Holland also had a great game, rushing 18 times for 104 yards. This put him as the 21st player to reach career 2,000 rushing yards at Colgate. Another key player was junior punter Tommy Halkyard, who came off the bench and was able to punt six times with a 37-yard average. Senior defensive lineman Caleb Fell also made a crucial play towards the end of the game when he deflected a pass at the line of scrimmage that stopped UNH’s last chance at coming back at Colgate. Raider head coach, Dan Hunt, was understandably pleased with the team’s performance this weekend.

“To come to this place and not give up a touchdown – this will be one of the better memories of coming up here,” he said.  “Our defense really did that last week too. Against Holy Cross, we had them bottled up for most of the game, but we let the quarterback make some plays with his feet. Tonight, we didn’t do that. I can’t say enough about our defense.”

The Raiders  said they are hyped about this incredible start to the season and are excited to keep up this high-level play throughout their next games. The victory this past Saturday not only secured the program’s best start this decade, but also earned them the #25 ranking in the Division 1 FCS poll. This is the team’s highest rankings since the beginning of the 2016 season.

After the weekend’s action, Holland and Wheeler cleaned up some hardware – Patriot League offensive and defensive players of the week, respectively.

Next Saturday, Colgate will face off with Furman, who currently stands at 0-2 after losing to No. 15 Elon 45-7. The kickoff is at 1 p.m. sharp, so be sure to tune in and root for your Raiders!