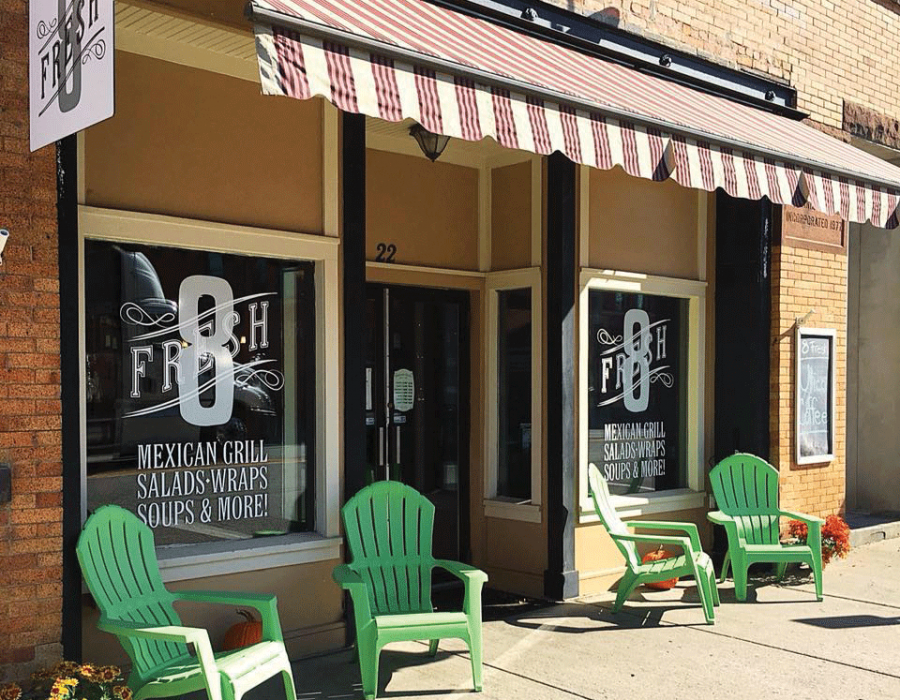 As 8 Fresh establishes itself in Hamilton’s food scene, the addition of Thai food feels like an identity crisis amid the “Mexican Grill” marketing.

In the past week, 8 Fresh, a relative newcomer to the Hamilton food scene, has nearly doubled its menu with the addition of Thai food. This change may come as a surprise to some who would argue that, despite its clear superiority over the late La Iguana, the restaurant has still not perfected its staple Mexican menu. Nevertheless, the addition of a Thai menu could be considered timely given that the closing of both La Iguana and N13 has left the local food scene short of ethnic offerings.

The Thai menu is an expansion of the Clinton, NY food truck ‘Tings Twist on Thai,” a Hamilton College late-night favorite. Ting, the owner of the truck, prepares the food daily in the 8 Fresh kitchen and then the food is assembled and cooked to order. The idea of a Thai menu is a nice reprieve from the unhealthy amount of Italian food we eat in this town (Yes, I’m looking at you Slices and Oliveri’s).

The Thai portion of the menu is on a menu board across the restaurant from the Mexican menu. Our orders were taken, not at the register, but along the counter closer to the Thai menu, and we then were asked to go to the register to pay.

Similar to the Mexican side, the food came out quickly, though the whole meal was not brought out all at once – there was a three to four minute wait between items. Timely, but not ideal if you are eating with a large group. Considering there were three people on staff and no one in line, I question why elements of dishes were prepared individually.

According to the manager, 8 Fresh has big plans for the future, including late night burritos and pad thai on Fridays and Saturdays. The owners are also attempting to obtain a liquor license – margaritas may survive in Hamilton, after all. There were also whispers of a possible Karaoke night in the future.

The pad thai was the first dish we tried and it was average; it wasn’t particularly flavorful but had the thin, tough noodle that one would expect. It had that twinge of sweetness that a good pad thai has before you get the savory taste of the mixed vegetables at the end of your bite. The vegetable to noodle ratio was a bit vegetable heavy, and I was a little concerned when the person behind the counter could not name the vegetables in the dish. That being said, I could see this being a strong option for those shuffling away from the Jug at 2 a.m. on Friday nights. At the $9 price point with the additional charge of $2 to $4 for meat, it seems a little expensive given the portion size; however, in this town, you take what you can get.

Next up was the drunken noodles with chicken. What struck me about the meal was that the chicken used to make the burritos was also used in the Thai dishes. How could I tell? It was drier than the Sahara. Dry chicken aside, the dish was pretty respectable. The noodles were a lot thicker and wider than any drunken noodles chicken I had seen before, but the noodles had a nice consistency to them from being cooked on the griddle be- fore coming out. The bites with chicken – which weren’t worth an extra two dollars – were at points tough, but adding the house sweet and sour “Duck Sauce,” did help soften it up a little. In terms of flavor, it left me wanting more. For the price, I’m not sure if I would revisit this item.

We ended the meal with the two items I knew I would be ordering late at night: spring rolls and potstickers. The vegetable spring rolls – meat can be added for an extra charge – were the highlight of the meal. Dipped in the “Duck Sauce,” they were the perfect late night binge food. Unfortunately, we were only given two. I hope that larger portions will become available at some point as I could eat these as an entree. The crunchy breading mixed with the vegetable provided that beautiful range of texture one looks for in anything fried. I will say that the breading to vegetable ratio could be a little more vegetable heavy, but if I was ordering these after a trip to the Jug, I probably wouldn’t care.

The pork potstickers, on the other hand, was the most disappointing of the dishes. They tasted like microwave potstickers you could buy at Price Chopper. The shell was dripping wet and undercooked. The pork had little discernible taste and was hard to eat through the crumbling raw dough surrounding it. If they had simply decided to put it in a deep fryer, I would probably have enjoyed them. To give the potstickers a fair chance, I tried them with both soy sauce and the “Duck Sauce.” They were only edible when slathered in the latter.

When thinking about food options in Hamilton, I always ask myself, “Would I go here if this restaurant were in my home town?” There are a lot of places for which the answer to this question is yes. I would certainly walk ten minutes to get a Mac Daddy, or to get a reliable slice of pizza for $1.75, to get a calzone as large as those offered at Oliveri’s for under ten dollars, or to have a bar that has Heady Topper – even if it’s only one day a year.

At 8 Fresh, I don’t think I have the same answer. For the price, the portions are too small and the food too bland to draw me into town to get it. It is still early for 8 Fresh, and they want to make their mark within the town; however, unless I’m stumbling out of the Jug, I’m just not feeling it.