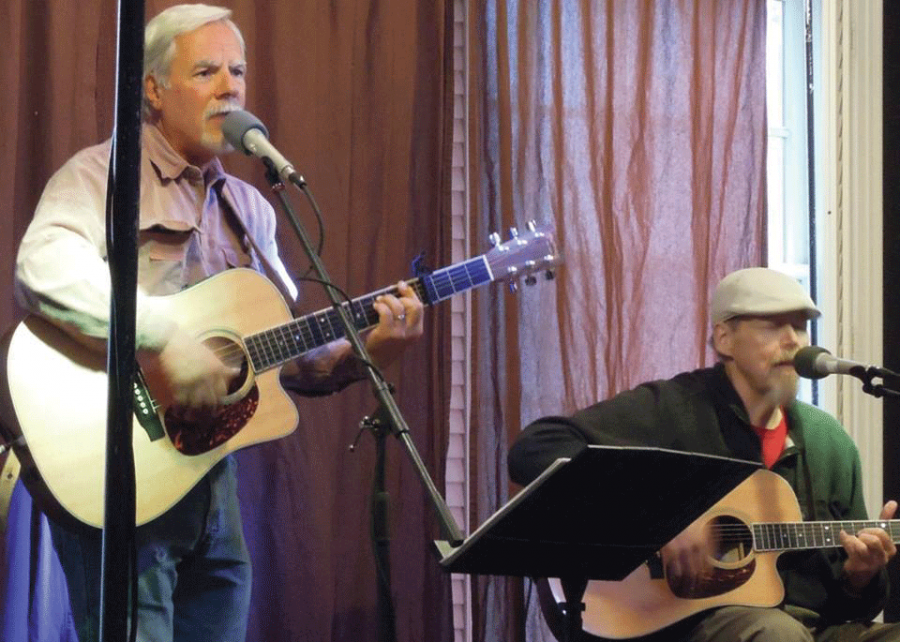 The music scene in Hamilton has been thriving since local architect Bruce Ward established the Local Music Project (LMP) in 2012. The project aids local musicians in booking performances and also showcases some more established acts from outside the general Hamilton area. This past Sunday, September 16, LMP featured O-Ryan, an acoustic duo from Syracuse, at the Good Nature Farm Brewery.

Ron Kadey and Bryan Dickenson formed their duet three years ago after hearing the melodious blend of their vocals at an open mic. The time they have spent performing in the U.S. and Canada is a small fraction of the combined years of musical experience they boast. They filled the brewery with such robust sound while only using two acoustic guitars. Their voices and an occasional harmonica made evident both their talent and skill.

Kadey and Dickenson sang in harmony on covers–or what they call “Ryanizations”– of songs by The Beatles, Edwin McCain, Van Morrison, Kansas, Kevin Welch, The Eagles, Crosby, Stills & Nash and more. The two interacted with the audience in the intimate setting by sharing their musical knowledge and their personal anecdotes about the songs. Kadey even took a request from his granddaughter and played “Puff the Magic Dragon.” The duo also performed a couple originals, one of which they were debuting live for the very first time.

Audience members tapped their feet and mouthed the classics while many enjoyed meals from the “Farm Brewery Bites” menu. Listening to the band seemed to bring the community together, as the crowd included everyone from local pre-school children and their families to college students and professors. The Good Nature Brewery neighbors the Colgate townhouses on one side and the Colgate Community Garden on the other, therefore making it one of the many places local community members and Colgate students can come together.

Matt Whalen, co-founder of Good Nature Brewery with partner Carrie Blackmore, recalled his eagerness to work with LMP when Bruce Ward asked if the brewery would be interested in presenting some live events. O-Ryan’s set was the second show at the venue through LMP, which has been hosted by the Colgate Inn in previous years.

For more local music visit the Good Nature Brewing website to catch some of the final shows of the season, including the Great Chocolate Wrecktoberfest from September 29 to September 30 and the traditional Last Grass Festival on October 14.