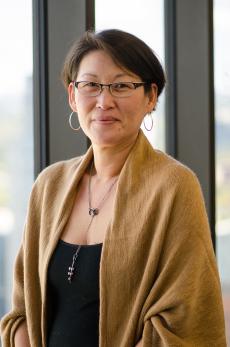 Kandice Chuh ’89 discussed the realities of working in higher education as an Asian-American woman in a Brown Bag hosted by Colgate’s Organization of Asian Sisters in Solidarity (OASIS) on Wednesday, March 4. As an Asian-American, Chuh felt she was expected to study the sciences; however, she chose to double major in English and Women’s Studies, which made her feel “part of an island of misfit toys.”

“If I claim ‘Asian-American woman’ as my identity,  I’m excluding so many other characteristics,” Chuh said.

During the presentation, Chuh focused on a series of racial stereotypes and the associated discrimination. She cited data from the fall of 2017, showing that only three percent of American-Asian women working for American universities are on track for tenure, compared to 30 percent of white females, and an even greater percentage of white males. Chuh used these statistics to explain intersectionality and the added struggles resulting from being a minority of a minority.

“What happens inside of United States campuses is a reflection of greater society,” Chuh said.

Chuh also discussed the struggles of being considered a ‘tiger mom,’ the common nickname given to Asian mothers. Chuh acknowledged that while some do fit the category of being demanding of their children, not all Asian mothers fit this derogatory stereotype.

Chuh also spoke about the ways in which she struggled with her own parents, who always had the expectation that she would go on to study science. A member of the Colgate Chemistry Department inspired Chuh to pursue an academic route that she truly enjoyed.

Sophomore Sukrita Karla was in attendance and related to Chuh’s discussion on parental pressure.

“I think that it can be really difficult to try and fulfill parents’ expectations,” Karla said, “which is why I liked that she wanted us to stop with all of that and give ourselves a break.”

Chuh devoted a decent portion of her lecture to discussing the fear of letting her parents down. Even still, she felt confident knowing that her parents would always support her, even if her decisions went against their wills.

Students in attendance, such as junior Audrey Cussen, felt that Chuh offered a new perspective on diversity and discrimination at Colgate and in society at large.

“Her lecture reminded me that while

Colgate has made positive steps towards being a more inclusive and diverse campus, we still have a long way to go,” Cussen said.

OASIS hosted Chuh in the ALANA multicultural center this past Wednesday. OASIS promotes discussion centered around voices concerns and struggles faced both on and off-campus for Asian-American women.