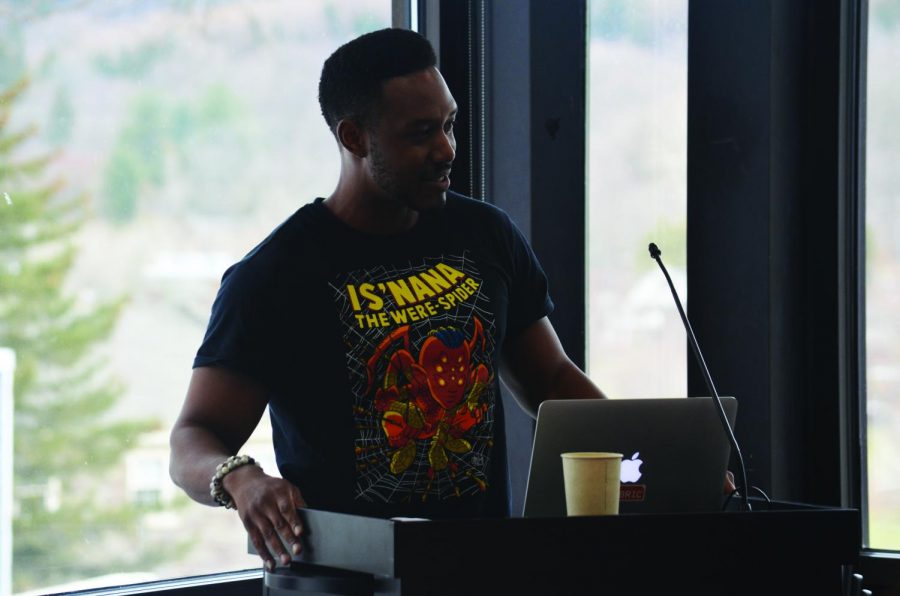 “Going into the event, I was hoping that students would see how a genre like comics allows for creators to explore issues surrounding the representation of diversity, especially when it comes to independent comics creators. We’d discussed these issues in my LGBTQ Studies class, but I wanted to broaden this conversation to invite folks from across campus to participate,” Humphrey said. “Particularly important is discussing underrepresented groups within black comics, such as bisexual, transgender and non-binary folks.”

Anderson-Elysée began his discussion by sharing about his own childhood, citing his family and his childhood interest in distinct story characters as influences on his passion for storytelling.

“Superboy,” the series depicting Kal-El’s early years as the famous DC character “Superman,” premiered on cable in 1988 when Anderson-Elysée was in second grade. It prompted him to go to a comic-book store for the first time and pick up his own copy.

“You can thank ‘Superboy’ for where I am today,” Anderson-Elysée said.

Anderson-Elysée explained that works like “X-Men,” “Hercules,” “Power Rangers” and  “Batman” served as other early childhood inspirations, but as he grew older he began to understand the lack of racial diversity in the characters he spent so much time idolizing.

Bishop’s introduction into the X-Men as a hero of color made Anderson-Elysée much more interested in the “X-Men” comics.

“’X-Men’ had to have Bishop or I wasn’t buying them, and this led me to understand imagery and the power of representation, as well as how much that meant to me,”   Anderson-Elysée said.

Anderson-Elysée went on to talk about the recently changing landscape of film and media in the United States, where the commercial and critical success of films like “Black Panther” and “12 Years a Slave” have shown audiences are ready and willing for more diverse films.

“Growing up, we were always analyzing white people and white stories. Oftentimes if you’re not making a movie about straight, white males, people will naturally assume you’re trying to send some message or make a statement,” Anderson-Elysée said. “Why can’t [people of color] be the default? Why do we have to be ‘the other’?”

These realizations prompted Anderson-Elysée to create more diverse art and media, who explained the role African folklore has played in guiding his first ventures into the comic-book world, referencing the tale of “Anansi the Spider.”

“Black mythology is underrepresented, and in turn, people’s knowledge of black heroes is dying off, Anansi’s role as the god of stories is dying off,” Anderson-Elysée said. “I want to remind people to think critically about where they come from, and I encourage people to be the one to change the narrative and make those stories come to life.”

Anderson-Elysée said he feels learning is an important part of conversations surrounding race and racism.

“I hope people would just be more open-minded. It’s all about involving, it’s all about learning, it’s all about doing the research, and about treating other people as human beings. Even if you have a certain level of privilege, there’s never a reason to not involve yourself in the well being of others. We all still bleed the same blood. It’s our job to break down racism and classism, and it’s even more important to make people on the other side feel comfortable,” Anderson-Elysée said.

“There aren’t many visible authors of color who are creating comics, so this was important for me. It’s up to all of us to engage in research and understand the different identities around us. Our world is composed of numerous identities and cultures; therefore, we need to engage respectfully and sincerely,” Johns said.