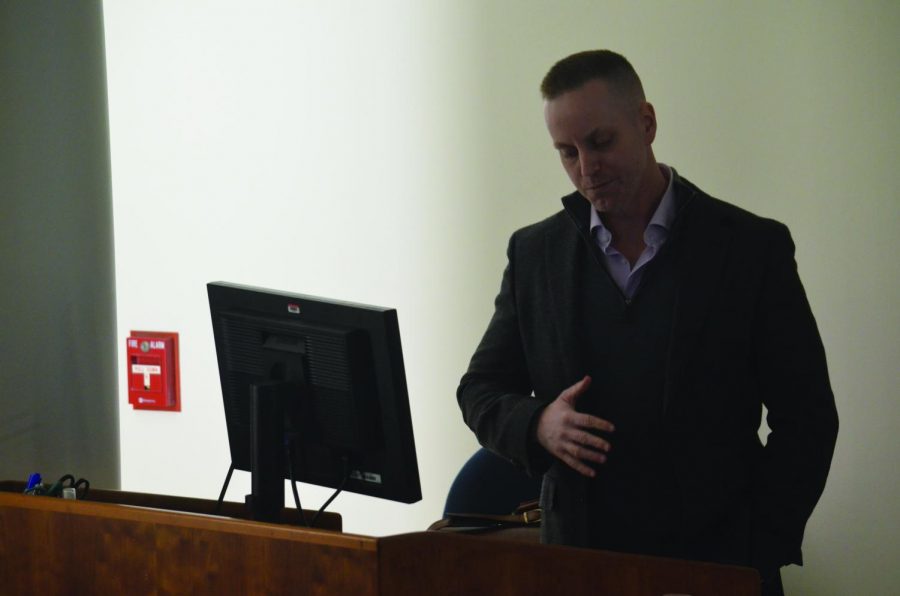 City University of New York Professor of Political Science Nicholas Rush Smith held a lecture discussing his ethnographic fieldwork in South Africa, the topic of his 2019 book “Contradictions of Democracy: Vigilantism and Rights in Post-Apartheid South Africa.” Smith’s lecture, sponsored by the Department of Political Science’s Kulla Lecture Fund, held on Thursday, March 5, examined the current acts of vigilante violence in South Africa, as well as issues with the country’s legal and judicial systems.

Smith is also a Senior Research Associate of Sociology at the University of Johannesburg, focusing on politics and crime in South Africa which has led him to conduct in-depth research in numerous South African cities for both his dissertation and book. Smith spent over 20 months interviewing South Africans and talking to local men who have been involved in acts of violence or petty crime through his fieldwork. By uncovering local narratives and investigating personal stories, Smith formed meaningful bonds with his interviewees and sources.

His research practices are what eventually drew Smith’s attention to the problem of vigilante acts of violence in South Africa.

“So many of the people I encountered were really concerned about crime, violence and insecurity in their own lives. The topic found me,” Smith said.

Smith gained insight on some of the underlying issues of the South African legal system and the local response to post-apartheid conditions in particular communities. In sharing these experiences and findings with Colgate students, Smith began his lecture with a short example of the extreme violence perpetrated by local citizens in South Africa. He focused on a local incident that occurred on Nov. 1, 2006, when a rape victim aided South African police in identifying her two suspected rapists. After the rape victim identified the men, the entire village mobilized. The whole community incited a violent riot, demanded to be given the rapists, and eventually castrated and displayed their dead bodies.

This story provided insight into the pervasiveness of vigilante violence in South Africa and provided the basis for much of Smith’s presentation on the underlying structural barriers to justice and the legal inequalities faced by citizens.

Smith explained that these common acts of violence by everyday people prove that valid democratic practices can often lead to immense institutional failure. In the case of South Africa, citizens do not have confidence in the viability of the legal system and therefore decide to take the law into their own hands. According to Smith, many South Africans believe “the criminal has more rights than the victim” in the eyes of the current legal system.

Additionally, Professor Smith claimed that in the wake of Apartheid, South Africans are experiencing a sense of empowerment, leading to popular activism that has proven capable to alter the actions and policies of an oppressive government.

First-year student Edi Dukesherer is currently in Professor Mark Stern’s “Benton Colonial Afterlives” course and asked about the relationship between race and the South African police force within the context of Smith’s past research. Smith explained to Dukesherer that the police force racially reflected the South African population equally, and, unlike in the United States, acts of violence are not usually framed within a racial perspective of police brutality.

In his continued comparison to the U.S., Professor Smith provided statistics claiming that approximately five to ten percent acts of violence committed in South Africa each year are due to vigilante actions. While this means that over 800 people are killed each year as a result of this cultural phenomenon, the numbers pale in comparison to lynching in southern U.S. during the late 19th century. Within a fifty- to sixty-year period following the emancipation of slaves, the U.S. was witness to lynching of between 4,000 to 4,500 people due to vigilante actions.

Although acts of vigilante violence can be found all over the world, Smith decided to focus his studies on South Africa because of the country’s “extraordinary transition to democracy and its amazing flowering of freedom.”

“South Africa has made me much more attuned to the inequalities and injustices that take place in the United States and I think it is important for students to understand the importance of being active citizens and active thinkers about the communities from which they come,” Smith said.