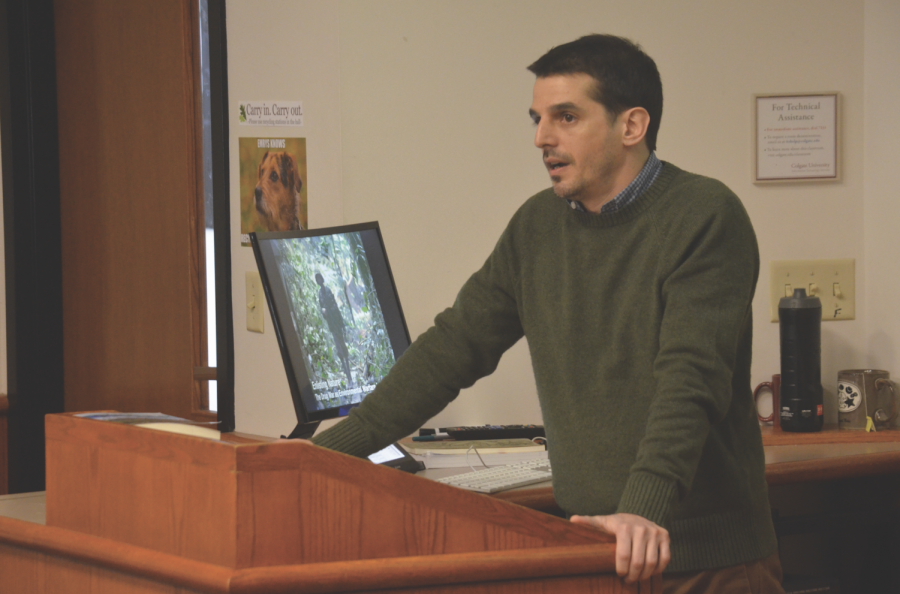 Assistant Professor of Peace and Conflict Studies and Geography Teo Ballvé discussed the environmental, historical and cultural nuances of the U.S. war on drugs as part of Social Sciences Brown Bag series. He gave insight into the supply chain of cocaine, highlighting continued American involvement in the form of “biocontrol agents” in Colombia despite peace agreements during “Enlisting Nature: The Drug War as Environmental Warfare,” held Thursday, March 5.

Ballvé explained the lasting environmental impacts of the war on drugs.

“Nature isn’t just the setting or the theatre of the war on drugs, it is the material through which it’s being waged. And the enlistment of nature has lasting damaging consequences for people and places and for some more than others,” Ballvé said.

The goal of the Social Science Brown Bag series is to share and feature the work of a faculty member in a weekly lecture, according to William R. Kenan Jr. Professor of Geography and Director of the Division of Social Sciences Adam Burnett.

“[The series] has been running for several years and it’s goal is to bring together social scientists and friends to hear everything from completed research to projects in progress,” Burnett said. “Some [faculty] want a sounding board for on-going research and are looking for advice. Some are newer professors who want to highlight their work in preparation for a review. Others feature completed work, such as a new book or article.”

After completing a Fulbright Program and conducting ethnographic research in Colombia, Ballvé published his findings in his book, “The Frontier Effect: State Formation and Violence in Colombia.” Ballvé is now exploring the function of Colombia’s environment as both a weapon of war and a tool for peace.

Ballvé challenges the traditional perspective of the drug trade.

Ballvé said he hopes that students take away a message from his work.

“There is cocaine on college campuses and hopefully this makes students have a better understanding of the long line of consequences that these drugs can have, and in particular what US policy has, because it is not the drugs themselves necessarily that are the problem but the fact that they are illegal and the kinds of conflicts that illegality creates,” Ballvé said.