The Colgate Maroon-News • May 3, 2018 • https://thecolgatemaroonnews.com/2281/news/del-cueto-talks-election/ 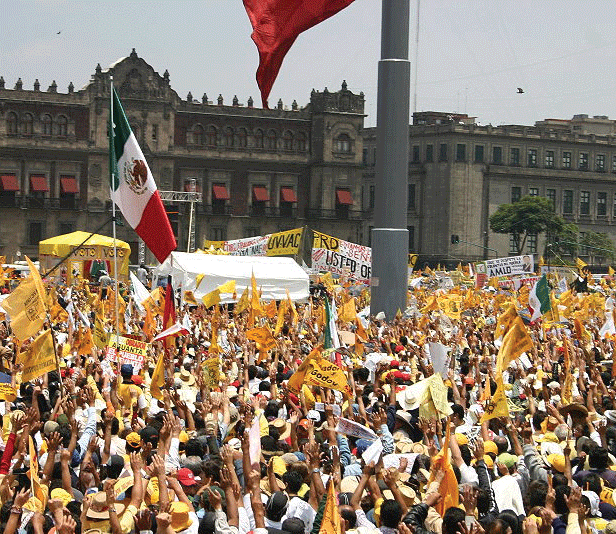 On July 1, 2018, Mexicans will head to the polls to elect a new president in what could become the most consequential election since the country transitioned to democracy in the late 1990s. The panel discussed the election itself as well as its broader implications for the evolution of Mexican politics and North American Relations. Ibarra Del Cueto began the discussion by focusing on the broader context of Mexican politics. Mexico’s democratization in the late 1990s resulted in economic transformations for the country, such as through NAFTA and other commercial agreements. Through these agreements, Mexico’s economy has transitioned from a closed economy to a very much open economy.

Ibarra Del Cueto introduced the candidates for the 2018 presidential election in Mexico.

Andrés López-Obrador, on the left of the political spectrum, is running on a platform of political regeneration of the country, and is the only candidate that has questioned the current model of development that the country has been following.

Ricardo Anaya is positioned on the center-right of the ideological spectrum. Anaya runs a campaign based on acknowledging corruption and prosecuting members of the current administration.

Continued from page A-3.

José Antonio Meade, a member of the incumbent party, is running a campaign based on his experience, as he has occupied positions in the government for a long time.

Ibarra del Cueto asked the panel members for their reaction to the poll numbers and the election.

Bata said that the first debate had to do mostly with violence, security and corruption. Bata also brought up the interesting point that in the US there has been a healthy cycle of debate about the election and 150,000 ballots will be recast by Mexicans living in the US.

“The most recent poll put López-Obrador at 48 percent, and no Mexican presidency has run a majority since 1988, and that number was most likely fraudulent,” Cleary said.

Macías discussed four general trends in Mexico right now. The first is the steady erosion of parties in Mexico, the second is the erosion of trust in electoral authorities, the third is the steady process of decentralization of the country over the past couple years and the fourth is the decline in support for democratic norms.

Ibarra continued the conversation and asked the panelists to comment on the difficulty for the country to protect certain liberties of democracy, such as the freedom of the press. Additionally, Ibarra asked the panelists to elaborate on their expectations for the election and whether we can expect any change regarding these issues.

Bata claimed that Mexico needs to push for reforms that maintain transparency laws.

Ibarra shifted the conversation to discuss the policies of the current administration, such as the beginning of the war on drugs in 2006. He asked the candidates to elaborate on what we can expect next in this regard.

“For now it is very concerning because the human rights violations have increased, due to the rise of the self defense militia forces. In many states in Guerrero and the center of Mexico there has been an increase in militia forces that have been accused of human rights violations and they refuse to demilitarize and the state doesn’t seem to be able to control the situation,” Bata said.

Cleary stated that there is a common perception in Mexico that things were better in the old days, before the outcome of the policy changes in 2006.

“It’s fair to say that the Mexican public is ready for a change, and an amnesty proposal is one way to do it,” he said.

Macías provided insight on the electoral logic behind increased militarization.

“Citizens are very concerned about public safety, and they want to see the military controlling the streets whether it works or not.” Therefore, gradually changing the police force and strengthening institutions is much less flashy than bringing in the military, which is a quicker solution even if it doesn’t have great results,” Macías said.

Ibarra shifted the conversation to discuss the US-Mexico political space. These two countries have become integrated economically and socially, and “have had very good relations for the past couple of decades but this seems to be changing.”

Cleary mentioned that a huge number of Mexicans live in the US, and a million Americans live in Mexico, and the ties between the two countries are robust, long lasting, strong and historical, and the relationship between the governments are the same.

“The leading rhetoric of the candidateshas not been negative toward the U.S.,” Macías  said.

He claimed that there are many constraints that would make it hard to undo existing ties, such as NAFTA, business relations, and Mexicans living abroad.

“It was really interesting to hear and learn more about another country’s election rather than a United States presidential election. Also, it’s reassuring to hear more about US-Mexico relations and how it will be hard to undo the relationship between these two countries, despite everything that has been happening,” she said.