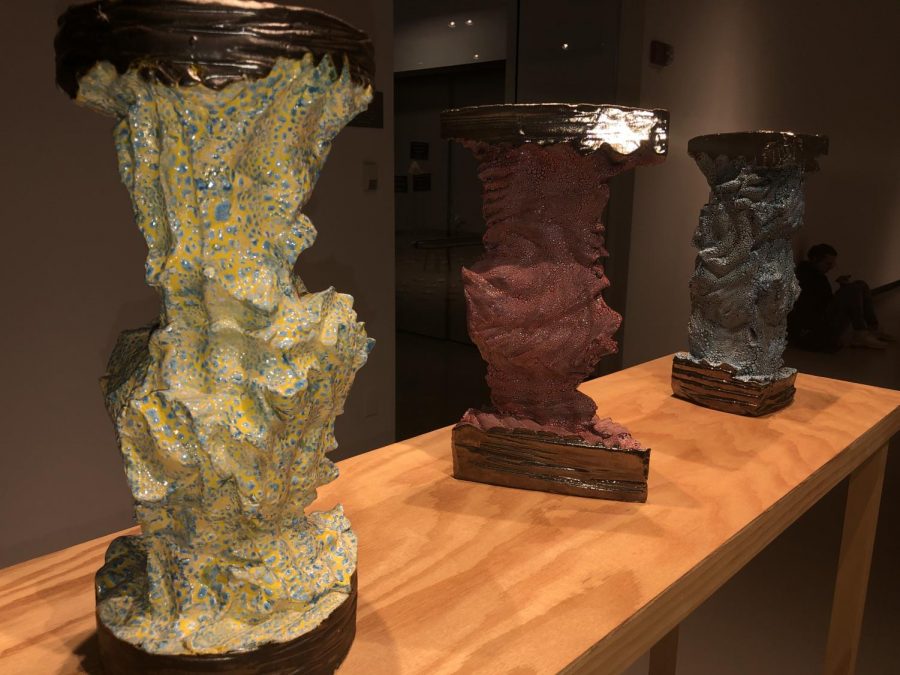 Rebecca Murtaugh, creator of the “Telluric Meditari” exhibition which is currently exhibited at Clifford Gallery in Little Hall, gave a lecture in Golden Auditorium on Tuesday, March 4 about the meaning and inspiration of her artwork as well as her creative process.

The Clifford Gallery will showcase Murtaugh’s sculptural objects as well as an installation called “Reflective,” in which observers are invited to sit and have a meditative look at the art around them through March 29. Murtaugh encourages viewers not to be discouraged by the signs that say not to touch the art when it comes to “Reflective” because the piece is meant to be interactive.

One thread that wove through her presentation was the significance of juxtaposition in art—in this case, particularly between the natural and human-made world. Murtaugh shared a video from a time that inspired her when she was on a beach just off of an airport in New York City. The sounds of the planes taking off above and the waves crashing below illustrate the powerful contrast that Murtaugh is interested in capturing between the natural and man-made.

In the same vein, Murtaugh talked about holes in shells that she found, which come from mollusks drilling into clams and sucking up the prey inside to eat. This lends itself to another contrast; this time between brutality and beauty. Murtaugh explained that in a way, the violence of nature bred a new beautiful object.

This theme of holes permeates through the collection in her structural objects. Although many people find holes unsettling—there is even a phobia of holes called trypophobia—Murtaugh’s artwork strives to reveal the rather beautiful aspect of these items by divulging the inside of the objects and making the unseen seen.

Additionally, these vibrant and textured pieces were crafted by hand because Murtaugh is interested in the mark of the hand on her artistry. Clay provides an ideal quality of malleability that welcomes precise detail and easy manipulation by the hands, as opposed to the less controlled and more detached process of using a chisel.

“I thought it was interesting how [the manipulation of materials with her hands rather than tools] made the connection between art and artist, especially because some artists are more intertwined with the presentation of the art rather than the creation of the art,” sophomore Elizabeth Svach said.

This focus on the organic, raw molding of the art, by experimenting and exploring with her hands on a table in her studio, is reflected even in the presentation of the sculptures on exhibit.

“All of these pieces were made on a table so the fact that it should be displayed on a table makes perfect sense to me,” Murtaugh said.

By combining earthly materials with industrial material, Murtaugh revels in the act of “breaking the rules” with clay by creating artwork untraditionally. She also reemphasizes the dichotomy, and simultaneous harmony, between the natural and manmade world with these unique pieces.

“The whole idea of her breaking the rules was interesting because there has to be a degree of bravery in art in creation and presentation and defending your work. You have to believe in it and you have to know that rules are more of a reflection of the past rather than a necessary evaluation of the future when it comes to art,” Svach said.

The Telluric Meditari exhibition will be in Clifford Gallery in 101 Little Hall for free until March 29.