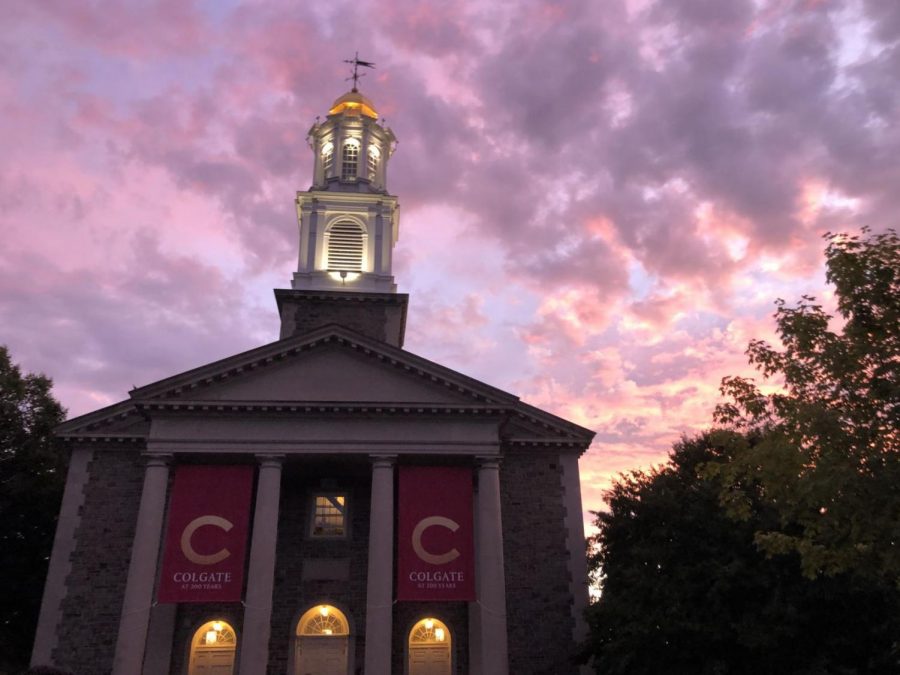 In an email sent to the student body, Colgate University President Brian Casey encouraged students to stay on campus during spring break and announced that classes would be moved to online platforms beginning March 23. Sent at 6:16 p.m. on Tuesday, March 10 the email highlighted other university policy announcements and updates, including that gatherings of more than 100 people will be canceled or rescheduled until after April 19. Casey cited the March 23 through April 19 schedule as providing “a timeframe for University planning and evaluation in the weeks ahead.”

The email organized policy updates into several categories, including spring recess, academic continuity, events and logistics, travel guidance, additional communications and ongoing proactive efforts on campus. The spring recess portion addressed policies focused on the coming spring break, which begins this Friday, March 13, and continues through next Sunday March 22. Casey stated that residence halls will remain open, along with dining halls and cruisers, both of which will be on modified schedules. Students planning to stay on campus are asked to register this through the Colgate Housing Portal. University-sponsored international travel planned for this break is canceled, while university-sponsored domestic travel must be approved by the Executive Group of the Emergency Operation Committee (EOC), according to Casey. This approval process with the EOC will continue through Sunday, April 19 on a case-by-case basis, with requests submitted through divisional vice presidents. This applies to club sport and student organization travel as well, according to the travel guidance section of the email. As for non-university affiliated travel, “we strongly recommend that students remain on campus,” Casey said, while noting that the university cannot restrict individual travel of any student, staff or faculty member.

The email’s announcement that Colgate classes will take place online from March 23 and resume in-person meetings on April 20 followed a precedent set by other universities.  According to their websites, UC Berkeley, University of Southern California, Rutgers University, Ohio State University and Kent State University took similar measures to those outlined in Casey’s email, temporarily moving courses online and cancelling some campus events. Other universities, including Cornell University and Bucknell University have closed campus and moved courses online for the rest of the semester, according to their respective websites.

Casey elaborated on measures to continue Colgate’s educational mission in the academic continuity section of his email. Here, he acknowledged that some classes cannot continue in a purely online format, and stated that steps will be taken to work with students and professors to address these barriers to learning. Casey also confirmed that off-campus study groups will continue their programs, and program participants will be notified of any changes for their particular groups. Also outlined in this section of the email are two dates for communication updates. Casey said that the administration will be in communication with the Colgate community on March 23 and April 13, and address any potential scheduling changes, particularly in relation to the anticipated return to in-person classes on April 20.

The email also described the social-distancing policy to cancel or postpone university-sponsored events hosting more than 100 people beginning March 23, with the ban lifting on April 20, when in-person classes are also expected to resume. Prior to spring break, however, university-sponsored events will continue as expected, including the Patriot League Championship men’s basketball game between Colgate and Boston University this Wednesday, March 11 in Reid Athletic Center.

Casey highlighted ongoing university efforts to address the COVID-19 public health emergency. He stated that facilities staff have expanded cleaning efforts in public spaces and the university’s vehicle fleet, later thanking the university’s custodians for taking on extra shifts and adapting to new cleaning protocols. New hand sanitizer dispensers have been installed around campus, although the email does not note in what locations nor in what quantity. The email also states that plans for self-isolation are in place, though it does not detail what they are or who may be subject to them.

Casey also commented on the fluidity of the policies outlined in the email. “I want our community to know that these guidelines, and their associated dates, could change with little notice based on new information or recommendations provided by state or federal authorities,” Casey said, “We will promptly share additional updates with the community as often as needed.”

Other communications to be expected are further instruction for faculty on how to move courses online and information from Human Resources for Colgate’s staff, according to the email.

Some topics went unaddressed in Casey’s email. While it was made clear that campus services like dining halls and residences would remain open, facilities such as academic buildings, libraries and recreational centers were not mentioned. The email touched on the Patriot League Championship game taking place this week, however did not discuss any other athletic activities. Meanwhile, the Ivy League canceled its basketball tournament for both women’s and men’s teams, sending regular season champions to the NCAA championship, according to TheNew York Times. Cornell University has also restricted spectator attendance at home games to 100 total attendees, as reported by cornellbigred.com.

No specific recommendations were made for students’ spring break plans, aside from the recommendation to stay on campus. Upcoming admissions events, such as Experience Colgate, which is set to take place on April 6 and 24, were not addressed. According to the Colgate website as of press time, Experience Colgate, admitted student visit days and overnight visits remained posted and with registration opening March 22.

Student Government Association co-President senior Kate Bundy said she was annoyed with the lack of clarity in the email. “The university’s response was an incoherent hybrid of several solutions,” Bundy said, “They could have canceled spring break. They also totally had the authority to do more with that email and tell people not to go places.”

She went on to detail her frustrations with the focus on student and faculty needs over those of staff. “I’m frustrated because I thought it negated the health of non-academic personnel on this campus and in the local community,” Bundy said.

It seemed that Casey captured the scope of  COVID-19’s impact on Colgate’s community at the end of his email. “We will be making adjustments in nearly every aspect of our lives on this campus,” the president said. All information regarding the university’s response to this public health crisis can be found at www.colgate.edu/covid19.