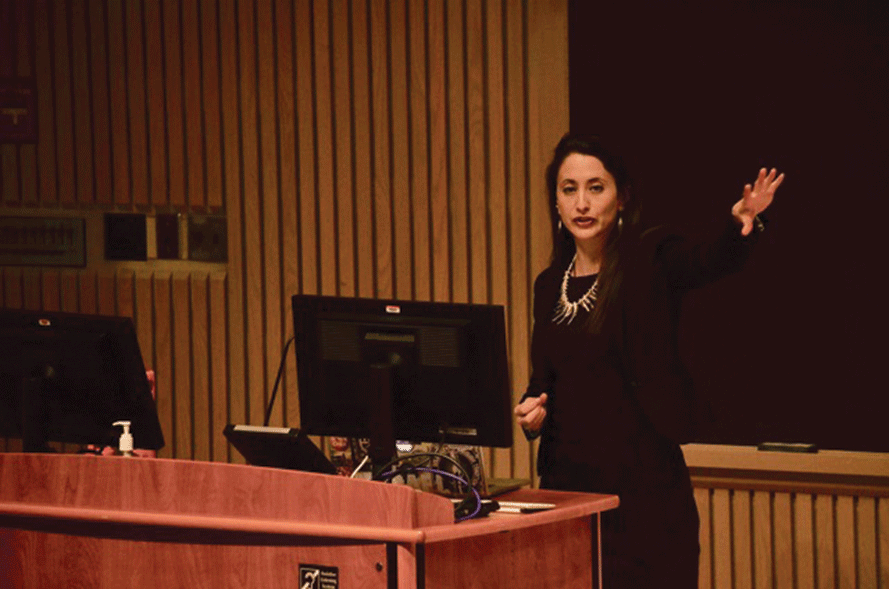 Hoover lectured on the alteration of food sources for Native American communities. Currently, there are many food sovereignty projects in the U.S.

Hoover offered multiple definitions for food sovereignty throughout the presentation, and these definitions depended on the context and the opinions of those she interviewed. Notably, the most prevalent definition stemmed from the 2007 Declaration of Nyeleni.

“Food sovereignty is the right of peoples to healthy and culturally appropriate food produced through ecologically sound and sustainable methods, and their right to define their own food and agriculture systems,” the Declaration reads.

Hoover’s journey begins with “From ‘Garden Warriors’ to ‘Good Seeds,’” a blog she curated that focused on her journey across North America documenting the workings of 43 different Native American food sovereignty projects. These projects view food at a cultural level and aim to produce food that fulfills health and calorie-counts, while also growing crops that harken back to native cultures.

Hoover detailed the long history of how European colonialism, and later the United States government, shattered the cultural identity of native tribes across the North American continent. Scorched-earth tactics in the Revolutionary War, the Trail of Tears and other major factors stripped many Native Americans from their cultural backgrounds. Looking at these actions through the lens of food sovereignty shows how the U.S. government paid little mind to the importance of preserving this aspect of Native American cultures.

Previous attempts to benefit native populations, such as nutritional aid, ignored the importance of culturally relevant foods such as corn.

The alteration of food sources for Native Americans may seem like a merely nostalgic problem, but health issues stem from these changed food sources. Type 2 diabetes has become the seventh largest cause of death in native communities, an issue that was not prevalent in the 1940s.

In the 21st century, many food sovereignty projects have sprouted around the nation, attempting to reestablish sources of culturally relevant foods in native communities. The reintroduction of traditional foods will help with health issues in native communities, and be economical. Native businesses that sell traditional foods keeping money within the community, helping to strengthen the economy of often poor regions and attracting native chefs to buy from food sovereign-businesses.

First-year Sutton Bryan stressed the significance of the presentation.

This issue of food sovereignty is more than just about the preservation of a culturally important feature of a community. Although the cultural significance of native farmers reintroducing their own crops back into their own communities is important, these projects also aid the economic and health issues that plague many different native communities.