Book Review: U-GOD and the Wu-Tang Clan’s Rise to Fame 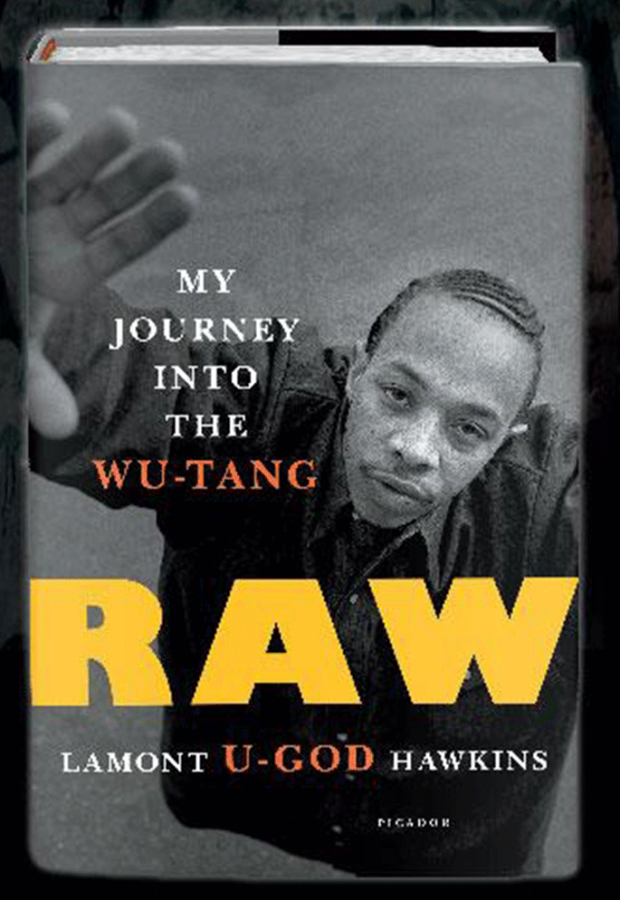 Giving readers peek inside of the infamous Wu-Tang Clan, U-God writes about his journey.

“It’s time to write down not only my legacy, but the story of nine dirt-bomb street thugs who took our everyday life – scrappin’ and hustlin’ and tryin’ to survive in the urban jungle of New York City – and turned that into something bigger than we could possibly imagine, something that took us out of the projects for good, which was the only thing we all wanted in the first place.”

This quote from Lamont “U-God” Hawkins’ new memoir, Raw: My Journey into the Wu-Tang, briefly summarizes the book’s objective. In roughly 300 pages, U-God tells his life story, which is inseparable from the story of the Wu-Tang Clan. Although his story is one of survival, it is much more than that. It is an insiders’ look at the Wu-Tang Clan, a candid reflection of growing up in the Park Hill projects of Staten Island; a sociological insight to the drug trade and project politics of the early 90s. Most of all, however, it’s a compelling story of how one of the most underrated members of the Wu-Tang Clan has triumphed despite the many obstacles and hardships that he has faced throughout his life.

U-God was childhood friends with Method Man, Inspectah Deck and Raekwon, who would all become members of the infamous rap supergroup, the Wu-Tang Clan. Intermittently, U-God ran into RZA and Ghostface Killah and eventually befriended them. Raw begins with his childhood on Staten Island and goes into some of his earliest and most impactful memories.

Throughout his memoir, U-God reflects on his time as a prominent crack dealer. U-God writes that “the drug game is the last stand for survival, where you have nothing else on the streets. You don’t even know what the fuck you’re doing. You don’t have an education. You don’t have a job. How you gonna eat? Welfare pays three hundred dollars a month – what’s that? You can’t live off that. You need to do something to survive.”

Reading Raw brings you right into the heart of the crack epidemic. You see that world through U-God’s eyes. You even question yourself. What would you do? How do you survive in this crabs in a barrel situation?

U-God did what he could to survive and got caught several times. He was incarcerated when the group was in the middle of recording its debut album, Enter the Wu-Tang (36 Chambers). Because of this, U-God was only featured twice on the album. He was released shortly before the album’s release but managed to record one of the best verses on the album on “Da Mystery of Chessboxin’.”

At a certain point, U-God decided that the drug game was neither sustainable nor safe. If he wanted to survive and get out of the projects, he knew he had to do something more. While he was on the streets, he was simultaneously going to a vocational college and working on his rhymes. He dedicates a whole chapter to hip-hop and its importance called “Hip-Hop Was Our Way of Life.” The Wu-Tang Clan was unique – it brought together nine brothers (technically friends but some cousins) from similar backgrounds, with distinctive styles, all trying to do one thing: escape the projects and be successful through music.

“I believed from the bottom of my heart that the Wu-Tang Clan was going to take us out of hell,” writes U-God.

“Most people don’t realize that the Wu-Tang Clan was eight years in the making,” U-God later said.

It took time and relentless dedication for the Wu-Tang to become successful. In the early days, they toured endlessly, often sharing only a couple motel rooms for the entire group and entourage. They were shot at during shows, shorted by club owners, underpaid, scammed by their manager the list. For a nine-member group, a small club in a small town could only pay so much. After the money is split, there’s hardly any left. After leaving a lucrative hustle in the crack game, it was hard for U-God to settle for a few dollars. But he, like the other members, knew that success was certain.

The second half of the book is roughly broken down into three parts: The Wu-Tang Clan story, U-God’s personal life and the group’s internal problems. Raw vividly recounts the wild tours and adventures, with all of the true stories that comprise the Wu-Tang legend. U-God also opens up about his failures and redemption with writing music. About the same time as the release of this book, he released his fourth solo LP, Venom. It’s his most succinct, visceral and enjoyable album thus far.

U-God concludes Raw by addressing some beef (drama) with RZA. He says, “RZA also started becoming a bit of a control freak around this time… Trying to exert too much control over grown-ass men leads to problems.” In response, RZA said in an interview with Rolling Stone that, “I could never be a control freak. If Wu-Tang is a dictatorship, how does every Wu-Tang member have their own career and have put out more albums without me than they’ve done with me?” Currently, U-God is still waiting for the final verdict on a lawsuit that he filed against RZA over royalty claims. Nonetheless, U-God notes that RZA is still his brother and is still family.

This memoir is an excellent portrait of an artist who helped shape hip-hop culture and the hip-hop sound with his role in the Wu-Tang Clan. It’s a fast-paced and entertaining read with plenty of funny moments, too. Reading books about hip-hop give a critical insight into more than just the genre. You learn history, sociology, philosophy and psychology. All of this is found in the music, but it’s more than music.