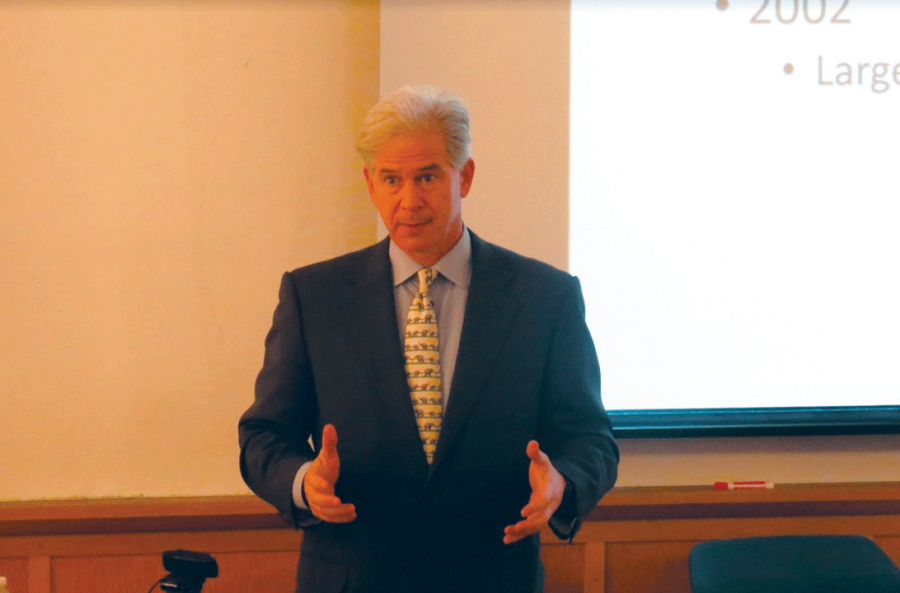 Andrew Fastow, spoke about his experience at Enron, which culminated in a six-year prison sentence.

In front of a crowd of Colgate students and faculty, Andrew Fastow held up his “CFO of the Year” trophy in one hand and his prison identification card in the other. Ironically, he was extolled for his excellence in off-balance sheet financing, the same thing for which he was incarcerated.

Fastow ruefully acknowledged that he was only standing in Persson Auditorium because he went to prison. He noted that he is surprised every time he is invited to give a speech.

Today he holds himself most responsible for the collapse of Enron, an American energy, commodities and services company and formerly one of the most admired companies in America. He apologized to the audience if there was anyone present with family members who may have been affected by his actions.

Fastow orchestrated a financial engineering scheme that led to the largest corporate criminal investigation in history.

However, prior to his indictment and even for a few years after he was given his prison sentence, he thought that he was behaving ethically.

Fastow alluded to Supreme Court Associate Justice Potter Stewart who once said, “Ethics is knowing the difference between what you have a right to do and what is right to do.” Ethics occurs in the gray area, when you are allowed to do something, but morality may point elsewhere.

“[In] every deal I did when I was at Enron, I always tried to follow the rules, but I also always tried to get around the principles. In other words, I was doing deals that were technically allowed, but that were misrepresenting what Enron looked like. In essence, I was using the rules to try and create an advantage for my company,” Fastow said.

Senior Mike Rappaport was interested in the ethics involved.

“I thought it was really interesting that he hadn’t technically broken any rules, but the government still found him guilty of fraud. It’s such a systemic problem, but it’s still the responsibility of the individuals to be responsible for their own actions. Nobody does that because they don’t have to,” Rappaport said.

Fastow exploited loopholes and ambiguities in the law so that Enron was able to operate as a triple B-plus company with triple B-minus entity. Through accounting assumptions and structured finance, Fastow fundamentally transformed the company’s appearance with false financial health.

The rule books and the law do not enforce accountability; rather, they encourage manipulation.

All of his decisions had been approved by Enron’s accountants, outside auditors, both internal and outside attorneys and all seventeen members of the board of directors.

“All those deals were approved by all those experts, by all those gatekeepers, and yet it was still fraud,” Fastow said.

He assumed that because he was getting permission and following the rules, his behavior was acceptable.

Fastow promised they weren’t all in a dark room planning fraud or how to screw people over; they actually all thought that what they were doing was right.

“When money is involved, your brain will take over,” Fastow said.

Fastow was saving Enron billions of dollars and kept the stock price on the rise. The board of directors called him a genius.

Fastow noted how scary this situation was, that no one really considered the impact of their choices, and how prone it is to repetition. He referenced Hillary Clinton and her email scandal.

“You get to use the rules,” Clinton said about the scandal. “I fully complied with every rule that I was governed by.”

Sophomore Charlie Huemmler recognized this issue on a smaller scale.

“It affects all of us. We all think that if we follow the rules that we’re doing what’s right. But, we have to ask ourselves on a deeper level if what we’re doing is morally right, not just according to a rulebook,” Huemmler said.

Colgate seniors approaching graduation must be especially conscious of the dichotomy between rules and principles. Instead of being a “whistle-blower,” or a tattletale, Fastow urged those entering the workforce to be inquisitive when they are doubtful of their colleagues’ ethics.