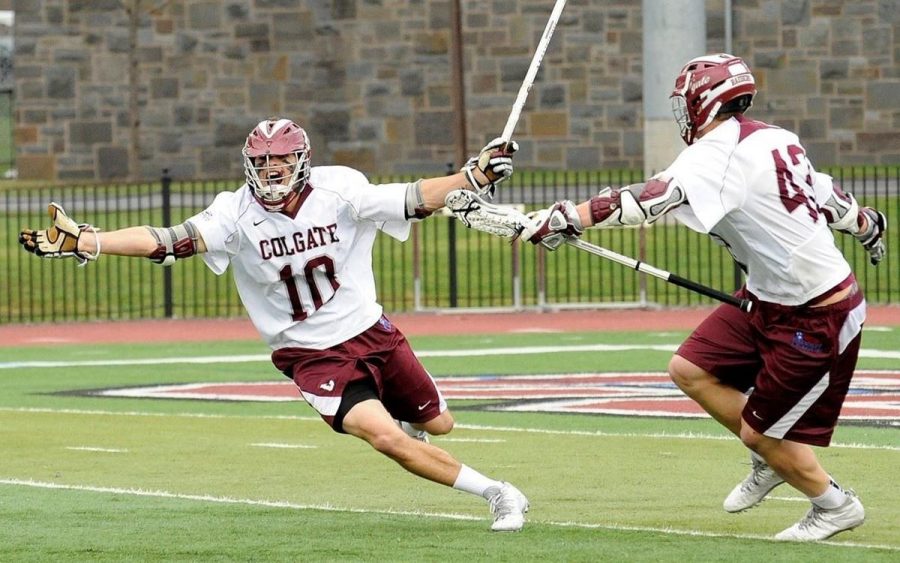 For Colgate’s student-athletes, Thursday, March 12 began a seemingly regular day, but quickly turned into one that would be unforgettable. As they woke up, packed their bags in anticipation of that afternoon’s practice and headed to classes uphill, these student-athletes would soon receive the news that their seasons were canceled, changing their lives in significant ways.

At 10 a.m., all Colgate student-athletes were called down to their locker rooms for an emergency meeting. Once gathered, coaches delivered the news to their players that all remaining games and practices were cancelled to prevent the spread of COVID-19, a strain of coronavirus responsible for the global pandemic. While many athletes had been aware of the threat of the novel disease, as many schools across the nation had already switched to online classes for the remainder of the year and the Ivy League and New England Small College Athletic Conference (NESCAC) had already cancelled their sports seasons, the news still came as a shock for many.

The news initially prompted a spell of silence and disbelief in the locker rooms, which quickly turned to tears and remarks of disappointment.

“It is incredibly sad to hear the silence on campus, as President Casey said in his video message this week. There are no shouts of encouragement to teammates, no hustling footsteps getting to lift on time, no coaches’ voices recruiting or strategizing, and no whistles. Never before have I personally missed sports so much, or the people who provide them,” Athletic Director Nicki Moore said.

Unexpectedly losing over half of their seasons has had an especially tolling effect on student-athletes in the senior class. Senior women’s lacrosse captain Sam Croston was one of these individuals. After spending her high school years working to get recruited by a high-caliber collegiate lacrosse team such as Colgate’s, and then continuing to dedicate a significant portion of her out-of-classroom life to lacrosse for three-and-a-half years, the sudden end to it all was hard to accept. However, after reflecting on the situation and coming to terms with unshakable reality, Croston noted a few silver-linings in this unprecedented situation.

“I’ve come to major realizations about which aspects of sports make the experience of being on a team so special: leadership, teamwork and unity. Of course, I originally felt defeated by the fact that my last season came to a screeching halt; I had goals I wanted to accomplish and now I won’t get the chance to [do so],” Croston said.

Croston said that being part of a team has helped her and her fellow teammates cope with the situation.

“It took less than a day for me to realize that COVID-19 presents student-athletes nationwide with the opportunity to utilize the [situation] as a reason to rally around each other. I was met with unparalleled support from my teammates and coaches after the announcement came out that the Patriot League was canceling the season. Coronavirus took away the greater half of my season, but I will never be stripped of the relationships I’ve built, qualities I’ve developed and memories I’ve made through playing sports and being on the lacrosse team. As disappointing as the end of this lacrosse season was, I won’t let the first 90 percent of my collegiate experience be defined by the last 10 percent,” Croston said.

It will be hard to imagine student-athletes taking even the most grueling of practices, featuring early wake-ups and tough conditioning drills, for granted again. Perhaps, likewise for students and attending class in-person after the Zoom trials begin on March 30 after the extended spring break comes to a close.

Student-athletes have not been the only ones in Colgate’s athletic community who have suffered from the cancellation of the remaining winter and spring seasons. Moore broke the difficult verdict from the Patriot League to coaches as well as teams. And while this was a disappointing end to Colgate sports seasons, Moore said she maintains the belief that Colgate Athletics will be stronger as a community after going through this.

“The experience of leading [Colgate Athletics] through this health crisis has been nothing short of surreal. It is deeply disappointing for every student who has lost their spring semester, and for our student-athletes who have lost one of a handful of competitive seasons—especially the seniors. And yet, it is an honor to lead these coaches, staff and student-athletes through it [all]. In the midst of their loss, I have been proud of each member of our Athletics community who seems to have recognized that this experience is so much bigger than us… We have turned our attention to being the best community members we can be, following CDC advice, and working to pursue our mission in new ways,” Moore said.

While members of the Colgate Athletic Department were most deeply affected, others in the community have been challenged by the cancellation of sports seasons. Passionate Colgate sports fans are also grieving the loss of being able to attend games and cheer on their fellow classmates.

Sophomore Emma Burke, who grew up in Minnesota and has been a lifelong hockey fan, was looking forward to watching the Colgate men’s ice hockey team continue its run in the ECAC Tournament after advancing to the second round, but their season was also terminated due to COVID-19.

“Being a sports fan is such an integral part of the Colgate community. I would have loved to cheer on Colgate sports teams through the playoffs and I am disappointed that their seasons got cut short,” Burke said.

Even through the chaos, Moore remains optimistic that the shared, unforeseen experience will unite Colgate’s team members.

“I am certain we’ll get through this, and if we work really hard, stay connected, stay fit and healthy, and protect the health of those around us, a day will come when we will practice and compete again, and we will appreciate the ability to do so exponentially more,” Moore said.