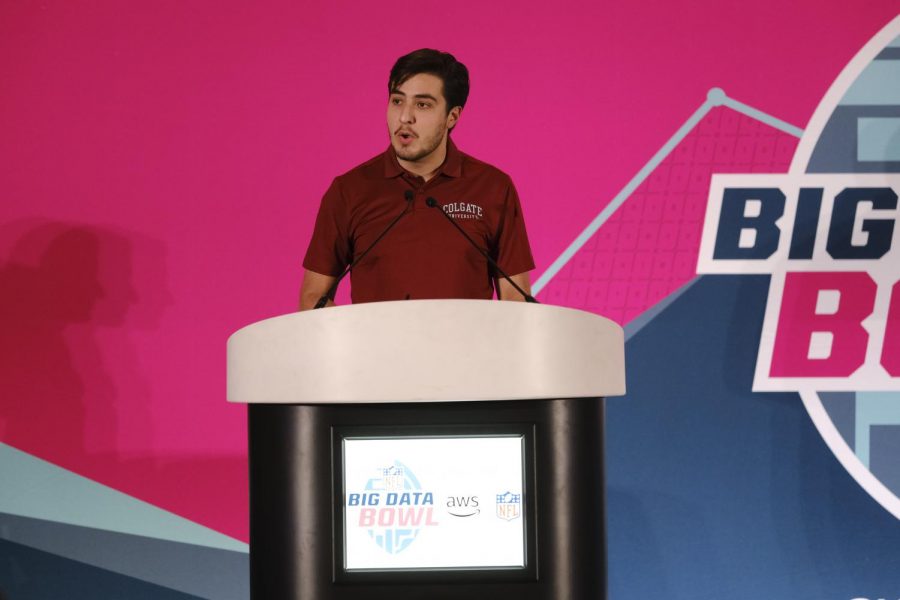 If you were ever into video games as a kid, chances are you heard on more than one occasion that they’re a waste of time. For Caio Rodrigues Faria Brighenti, however, a childhood love of computer games—Tibia and World of Warcraft, in particular—planted the seeds that blossomed into a passion for programming and, ultimately, a potential career in data science.

A senior from São Paulo, Brazil, Brighenti is a double concentrator in computer science and peace and conflict studies who has been “obsessed” with computers and technology since childhood. Without the help of a mentor or teacher, he started teaching himself how to code at the age of 12 using books and online tutorials, and has been “in love with it ever since.”

“For me, programming is such a rewarding type of creation. I love the feeling of having an idea, being able to see it through on my own and make something people can use,” he said.

In terms of his interest in peace and conflict studies, Brighenti attributes his second concentration to his desire to improve on his weaknesses, namely academic research and writing. After experimenting with a few courses in the social sciences, it became clear that peace and conflict was a where he wanted to dive deeper.

At Colgate, Brighenti is a proud member of the Benton Scholars, an active member of the Ultimate Frisbee club, and, most recently, the vice-president and co-founder of the E-sports Club. With Brighenti’s help, the group, which he founded in the Fall of 2019, has grown in size to nearly 100 members who play in teams that compete in weekly matches spanning five different games.

Though he has won more than a few awards here at Colgate—including earning the George W. Cobb Award his second year, being selected as a Charles A. Dana Scholar his third, and being selected as Phi Beta Kappa his fourth—he is most proud of being selected as one of six finalists in the 2020 NFL Big Data Bowl, an open data competition held by the NFL.

“I worked really hard on my submission, and since it was open to teams of undergraduate and graduate students, I didn’t think I had much of a chance as a solo undergraduate, so I was ecstatic to have been selected,” Brighenti said.

When asked if there is anything that makes him unique, Brighenti remained humble, citing his unique life experience—Brighenti has lived in three countries, Brazil, the US, and Argentina, moving four times between them—rather than his skills and subsequent accolades.

“I don’t think I’m any smarter or more dedicated than other Colgate students, but I think I’m uniquely adaptable and hard to discourage. I’ve had to move countries and leave my entire life behind four times in my life so far. Each time I left behind everything I knew and was plunged into a completely different world, usually not even speaking the language. I think that’s made me deal with adversity and unexpected situations. You can throw pretty much anything at me and I’ll still feel comfortable,” he said.

Currently, Brighenti is a Data Science Intern for the NY6 Data Science Collaboratory here at Colgate, a pilot project for building a data analysis and collaboration network focused exclusively on smaller colleges and universities in New York State. Looking forward, Brighenti is particularly interested in using his programming skills to answer questions, and hopes to land a job in the field of data science and sports analytics before attending graduate school.

If you’re ever in a pickle and need to convince your parents that playing Xbox is a worthwhile use of your time, just tell them about Brighenti.