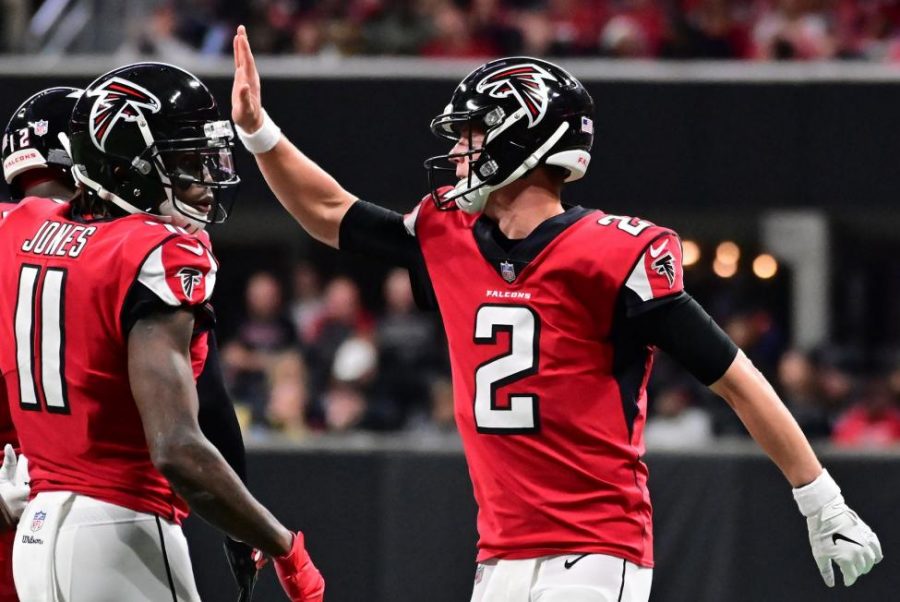 With the addition of running back Todd Gurley this offseason, the Atlanta Falcons seem to have put together their own version of a big three; Gurley joins wide receiver Julion Jones and quarterback Matt Ryan in a boom-or-bust offense. This year, the team’s most dire needs are all over the defensive side of the ball. The team needs to draft quality players to fill multiple positions in order to compete in the highly competitive NFC South (a division that holds the likes of New Orleans Saints quarterback Drew Brees, Carolina Panthers running back Christian McCaffery and newly-acquired Tampa Bay Buccaneers quarterback Tom Brady). To find success, it will come down to limiting the offensive potency of their opponents, while capitalizing with the immense talent they have on offense.

The most significant losses for the team this offseason include losing two former first-round draft picks in cornerback Desmond Trufant and linebacker Vic Beasley, along with tight end Austin Hooper, who were all starters. However, the team did sign tight end Hayden Hurst after a trade with the Baltimore Ravens and picked up outside linebacker Dante Fowler from the Los Angeles Rams this offseason. But, there is more work to be done.

Most notably, the team needs strengthening at the core of their defense, starting from the defensive line, to linebacker and finally their secondary. Some prospects to consider to add to their defensive front are LSU defensive end K’Lavon Chaisson and South Carolina defensive tackle Javon Kinlaw. To buffer the secondary, the Falcons could look at Clemson cornerback A.J. Terrell.

Beefing up their offensive line might not be the worst idea, as the draft moves into later rounds, considering Todd Gurley has a known history of knee injuries. All-in-all, defense should be the main concern to address for the Falcons’ front office.

This has been an offseason of transition for the Carolina Panthers. Teddy Bridgewater replaced Cam Newton at quarterback, Matt Rhule replaced Ron Rivera as head coach and star linebacker Luke Kuechly retired. The team will be picking at No. 7, and they have roster holes to fill, specifically on defensive line, secondary and offensive line. The Panthers also have to replace franchise players in Kuechly and tight end Greg Olsen.

At No. 7, Carolina should take the best player available. Some of the top available options could include versatile linebacker Isaiah Simmons to replace Kuechly and Ohio State cornerback Jeff Okudah to replace departed free agent James Bradberry. Auburn defensive tackle Derrick Brown is another option here, as he can serve as a replacement for Gerald McCoy, who left via free agency.

They could also look to bolster their offensive line with talents like Alabama’s Jedrick Wills, Iowa’s Tristan Wirfs, Georgia’s Andrew Thomas or Louisville’s Mekhi Becton. Wills has the best game tape among those lineman and should be the first lineman off of the board, but Tristan Wirfs dominated the combine with his 4.85 40-yard dash at 320 pounds.

Another option to consider is at the quarterback position. Even though Bridgewater has ties to new offensive coordinator Joe Brady (when they were with the New Orleans Saints), Bridgewater has only started two full seasons. Assuming Joe Burrow and Tua Tagovailoa are off the board by the No. 7 pick, the most viable options remaining will be Jordan Love and Justin Herbert. Since both Love and Herbert need time to develop, they can sit behind Bridgewater in 2020 before taking over as the starter.

The Panthers have eight total selections heading into the weekend; this draft class will be a big part of whether the team can return to their glory days of 2015. If not, they will remain in an extended rebuild with an uncertain timeline.

The New Orleans Saints are a perennial Super Bowl contender and going into the 2020 season, the narrative will not change. The Saints arguably have one of the most talented rosters in the entire NFL and it is difficult to say where they will need to improve heading into next year.

Still, they lost some key pieces during free agency: Safety Vonn Bell to the Cincinnati Bengals and linebacker A.J. Klein to the Buffalo Bills. While the Saints did secure a replacement for Bell in signing Malcolm Jenkins from the Philadelphia Eagles, they still have not brought in a linebacker to replace Klein. This opens an obvious need at the linebacker spot, which can be pursued in the draft.

Expect the Saints to try to nab LSU linebacker Patrick Queen with the No. 24 pick. Queen is a monster on defense and could really bolster the New Orleans unit for the future. If he is not on the board, look for them to take Oklahoma linebacker Kenneth Murray. New Orleans cannot go wrong choosing one of these guys, especially considering their current linebacker trio has a number of expiring contracts following next season.

A lot of news was swirling around another free agency addition in New Orleans as well. The Saints added free agent wide receiver Emmanuel Sanders, fresh off of a Super Bowl appearance with the San Francisco 49ers. Sanders was a key pickup for the Saints and probably leaves them looking at other positions besides receiver for their first-round choice. But, I would not be surprised to see them select a receiver in the third round or beyond to make sure quarterback Drew Brees has the weapons he needs to contend for a Super Bowl this season.

Another dark horse pick could see the Saints trying to get their quarterback of the future. Brees is getting to the end of his career, and it is uncertain whether backup quarterback and Swiss Army knife Taysom Hill can fill that void. I would not be shocked if New Orleans went with a quarterback to develop late in the draft.

With the recent acquisition of quarterback Tom Brady, the biggest pickup of the offseason, the Tampa Bay Buccaneers are now a team to watch in the 2020 NFL Draft. With their first pick coming at the No. 14 slot, the Buccaneers will most likely look to boost their protection of Brady; wide receivers Mike Evans and Chris Godwin can only do so much if Brady cannot get the ball out.

Look for the Buccaneers to select offensive tackles Mekhi Beckton or Jedrick Wills with at No. 14 to guarantee a solid offensive line. Tampa Bay may also consider Georgia star running back, D’Andre Swift, to complete a lethal offensive attack. With Evans, Godwin and (potentially) Swift, Brady would finally have the talent at skill positions that he has so greatly missed in New England.

However, with a probable offensive lineman pick, the Buccaneers might look to take a running back in the second round. Likely picks for this slot include Ohio State’s J.K. Dobbins or LSU’s Clyde Edwards-Helaire.

In the later rounds, look for Tampa Bay to boost their defensive secondary and wide receiver spot. The secondary has been lacking, but with some solid picks, interceptions will be coming on the defensive side of the ball next season.

Godwin and Evans are known stars around the league, but with Breshad Perriman gone, expect the Buccaneers to take a wide receiver or two to help out Brady.

In the very late rounds, look out for a quarterback selection. Head coach Bruce Arians has hinted at using Brady to groom a franchise player. Arians likely has his eyes on Florida International University’s James Morgan, Colorado’s Steven Montez and Utah’s Tyler Huntley.