2018 NFL Draft Preview: Who Goes First? Taking a Look at the Best Offensive and Defensive Prospects 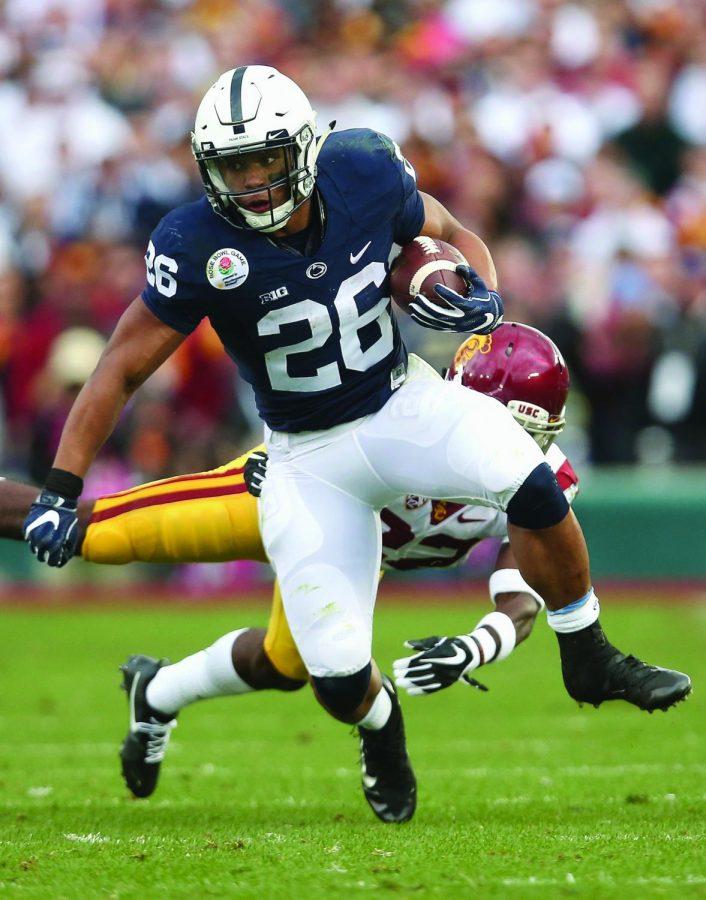 The Cleveland Browns have picks one and four in the first round of the 2018 NFL Draft. Tonight we will find out if Saquon Barkley, the Penn State running back standout, will be heading to Cleveland, New York, or elsewhere.

In this year’s projected NFL draft class, headlined by offensive stars like Saquon Barkley and Sam Darnold, several intriguing defensive prospects have also shown that they can make a difference for teams in the coming season.

Edge rusher Bradley Chubb is one of those players.  A projected top-10 pick, the N.C. State product ran an impressive 4.65 40-yard dash at the NFL combine and has exhibited unprecedented explosiveness at the position. Chubb’s high-energy playing style should immediately translate to the professional level for whichever team is lucky enough to draft him.

Alabama defensive back Minkah Fitzpatrick has also drawn some warranted buzz as a potential mid-first rounder. At 6’1” and 206 pounds, he has a rare combination of size and speed that allows him to effectively play both cornerback and safety.  In a league where hybrid players are becoming increasingly sought after for their unique skill-sets, Fitzpatrick will surely make an impact for his new team.

Staying in Tuscaloosa, inside linebacker Rashaan Evans has displayed late-first round potential.  A big yet speedy run-stopper, Evans has drawn comparisons to Pro Bowlers such as Ryan Shazier and Lawrence Timmons. The senior captain was a two-time National Champion with the Crimson Tide, so his experience and winning pedigree make him an appealing draft choice, especially for playoff teams with later picks in the first round.

Though all eyes will be on Barkley and the group of quarterbacks at the beginning of the draft, do not sleep on this year’s overlooked, yet underrated, group of defensive prospects. These guys can contribute just as much to a team as any offensive player, and players like Chubb, Fitzpatrick and Evans may end up being the next generation of NFL stars.

The 2018 draft class is PACKED with offensive talent, consisting of franchise

The first quarterback off the board will most likely be Sam Darnold, but he is not the top quarterback prospect. Josh Allen is a boom-or-bust candidate, and I’m taking boom on this one.

Although Allen went to Wyoming, which isn’t particularly known for their football program nor its ability to produce first-round quarterbacks, he possesses all the traits necessary to become a top tier gunslinger.

Standing at 6’5” and weighing 240 lbs, he has an extremely similar stature to Steelers legend Ben Roethlisberger. In fact, they are the same height, weight and have the exact same 40-yard dash time.

Allen did not have a great 2017 season, but his 2016 campaign proved that he is capable of playing and winning at the next level. The football community has lauded Allen for his cannon-like arm.

The best running back in the draft is Saquon Barkley. The Penn State product is the ideal combination of strength and speed, and the league has taken note. We’ve seen the impact that a rookie running back can have on a team, just look at Ezekiel Elliott’s work in Dallas. Many analysts are speculating that he’ll end up a New York Giant, which could make the Giants Super Bowl contenders. The best wide receiver in the draft is Calvin Ridley out of Alabama University. He proved his worth in the 2017 National Championship game, facing off against his brother Riley who is a receiver for Clemson. He also made the All-SEC team last year and has the athletic ability to make a smooth transition to the NFL. Opposing defenses, be warned: this draft class is loaded with some serious offensive

Saquon Barkley will be the first overall pick this year.  As a general rule of thumb, I think that the team with the first pick should take the most talented player in the draft.  While the Cleveland Browns are notorious for passing on future studs for draft busts, they simply cannot afford to pass on Barkley this year with their first overall pick. Risking letting him slide to four is not something they should consider, as several elite-prospect quarterbacks will be available at that point in the draft, be it Josh Allen, Josh Rosen, Sam Darnold or even Baker Mayfield.

The Penn State running back has been compared to many NFL superstars,

ranging from Hall-of-Famers like Barry Sanders to current sensations such as Le’Veon Bell and Ezekiel Elliot.  Barkley’s speed, strength and pass-catching ability make him too good for Cleveland to overlook, so he will go first overall and be the face of the franchise for the up-and-coming Browns.

Dallas this Thursday. The Cleveland Browns have not picked a quarterback within the top 10, let alone with the first overall pick, since 1999 (if you look up “bust” in most dictionaries, you’ll see a lovely portrait of Tim Couch… or Brady Quinn… or DeShone Kizer).

Darnold is Cleveland’s safest bet, as he is possibly the missing piece that the team needs to be taken seriously around the league. Cleveland’s 2018 offense features returning wide receivers Corey Coleman and Josh Gordon, but also recently acquired All-Pro wide receiver Jarvis Landry from the Dolphins in a move the shocked the league. Landry would be a perfect receiver for Darnold to start out his career throwing to, as he has proven to be reliable (led the league with 112 catches last season) and healthy (played all 16 games every season of his career).