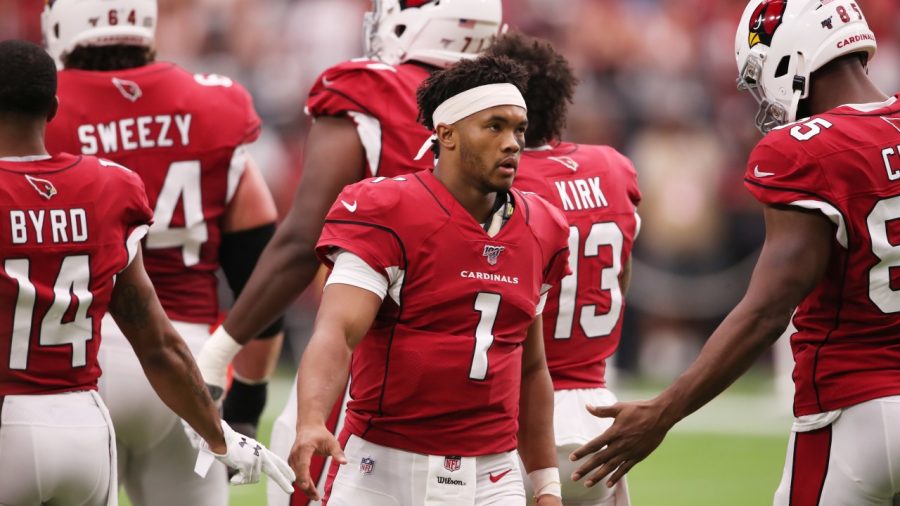 The Arizona Cardinals are slated to have the No. 8 overall pick in the first round of this year’s NFL draft. Prior to the draft, the Cardinals made a huge offseason splash by trading for star wide receiver DeAndre Hopkins.

This draft will likely be an opportunity for the Cardinals to build their lines on both sides of the football. The biggest issue for Arizona last season was the pass protection of quarterback Kyler Murray. They also had issues with their front seven on the defensive front. With the No. 8 pick, the Cardinals will likely go after one of the top three offensive linemen, Louisville’s Mekhi Becton, Alabama’s Jedrick Wills or Iowa’s Tristan Wirfs. If they do not go the O-line route, the Cardinals will likely take a defensive lineman, such as South Carolina’s Javon Kinlaw.

The best fit for the Cardinals is Wills, if he is available. There is growing speculation that he will be selected ahead of them, but if he is not, the Cardinals should take him. If Wills is gone, they will go with one of the other two top pass protectors to support their coveted selection from last year’s draft: Murray.

After the first round, I would look for the Cardinals to continue building their offensive and defensive lines. The team might look to add a tight end and maybe a safety to help their secondary, as well.

With the right picks in this draft, after the key offseason additions of Hopkins and a few other role defensive players, the Cardinals could put themselves in prime position to compete for a playoff spot as soon as next season.

The 49ers are the reigning NFC Champions and with how quickly their players have risen to premier status, the organization has every piece they need to finish the job in February 2021.

San Francisco pulled off a significant trade earlier this offseason to enhance this opportunity, acquiring the No. 13 overall pick in the draft for second-team All-Pro defensive lineman DeForest Buckner. They are one of four teams with two first-rounders, with another pick coming at No. 31 (a potential trade chip). The rest of their draft slots come in the fifth round or later, where they will probably add depth on the offensive and defensive lines. That being said, we have not had a Super Bowl participant from the previous season with a draft pick in the teens since… the 49ers in 2013.

That season, San Francisco really dropped off in crucial offensive categories, going from 10th to 22nd in total yards and 14th to 31st in plays. This disparity demonstrates the monumental importance of having offensive playmakers that extend drives and reliably put the ball in the end zone for a team looking to return to the championship.

Henry Ruggs III, wide receiver out of Alabama, is the explosive weapon head coach Kyle Shanahan needs to elevate the offense. Ruggs has a skill set that translates to the high-velocity style of football played today, not to mention it’s perfectly-suited for quarterback Jimmy Garoppolo’s offensive style. He is the human equivalent of a Formula One race car. With a talent for hitting the gas pedal and leaving defenders in the dust, Ruggs’ ability to create offense with the ball in his hands cannot be overstated. With a 40-yard dash clocking-in at 4.27 seconds, the man is a freak athlete, plain and simple. Add sensational pass-catching, electric adaptability and masterful footwork and you have got a prospect who could realistically ascend to stardom in his rookie season.

With Ruggs, Garoppolo will not have to resort to riskier throws which will allow Shanahan to shape-shift the offensive scheme during drives. Such are the measures the team must take if they are to learn from the mistakes of past Super Bowl hangovers and finally bring a title back to San Francisco. Wide receivers will be flying off the board, so if Ruggs or any of his other fellow talented class of receivers Jerry Jeudy or CeeDee Lamb are available, the 49ers must not let the opportunity go to waste.

At the conclusions of the most recent seasons, the Seattle Seahawks have come close to making the Super Bowl, but have always fallen just short due to an unforeseen hurdle.  Seattle has talent all over the field and is led by superstar quarterback Russell Wilson has proved to be a solid foundation on which to build a team around him. For years, the offense and defense of the Seahawks used to both rank top of the league in their respective categories. However, the defensive squad has slowly withered due to injuries, trades and retirements.

Improvement for each level of defense is assumed to be the priority for the franchise heading into the 2020 NFL Draft. With the (potential) loss of star defensive end Jadeveon Clowney to free agency, the team is in need of solidification. The linebacking and secondary corps for the team is a mix of young guns and veterans, implying a need for further depth building in positions across the backfield.

Pressuring opposing quarterbacks was a real struggle for the team in the 2019 season, which puts further pressure on adding to their mediocre secondary. So, the team might take a look at Utah’s cornerback Jaylon Johnson.

The team is not in a rebuilding phase or in a ‘panic mode;’ Coach Pete Carroll has constructed a balanced team that has become a contender in the league for the past several years. Rather, depth and quality for specific positions is the priority for the team heading into this year’s draft.

The Rams do not have a first-round pick in the 2020 NFL Draft because of their trade for lockdown cornerback Jalen Ramsey last season, but the second-round pick they acquired in the Brandin Cooks trade should prove to be valuable. It is even possible the Rams use that selection to trade into the first round.

Let us get into the Rams’ definite needs for the draft. First of all, they lost Gurley. The stud running back is going to be hard to replace with their first selection coming in the second round, but I think Ohio State’s J.K. Dobbins may still be available at the No. 52 spot. Dobbins was a monster running back this past year, raking in over 2,000 yards and punching in 21 touchdowns for the Buckeyes.

The Rams should be looking to strengthen both their offensive line and defensive line, too. They have an aging unit on the offensive side and one that has a general lack of success protecting quarterback Jared Goff. Expect a guard or tackle to join the Rams on the second day of the draft as well.

The Rams could use reinforcements on the defensive edge. Despite bringing in Leonard Floyd, they need more rushers and the draft is a perfect opportunity to address that need.

Many draft analysts have not put inside linebackers on their big boards for the Rams, but I think they still need to address that position. They lost Littleton and have not replaced him. They have Micah Kiser and Troy Reeder on the depth chart as starters, but both are young and are not stars. I can see either one becoming good players for the Rams, but I would not be surprised if the team tried to get another guy in the draft to add some depth.