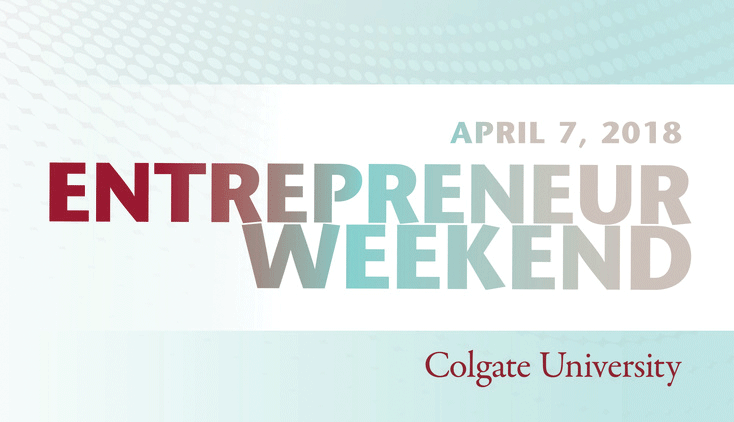 At 24 tables set up around the periphery of the room, students eagerly displayed the end results of their year-long efforts as a part of Colgate’s Thought into Action (TIA) entrepreneurship program on Saturday, April 7. Students and alumni gathered at the Hall of Presidents for Colgate’s 7th annual Entrepreneur’s Weekend.

Sophomore Kelly Nirenberg, one of the minds behind Migrane+, an app aimed at helping migraine sufferers manage their pain, explained the importance of her app.

“It’s what we’ve been working on all year, and we’re finally able to showcase it,” Nirenberg said. “It’s so cool to see that hard work can actually go somewhere.”

Potential investors and mentors had the chance to learn about a variety of start-ups, while entrepreneurs jumped at the opportunity to present their passion, be it a clothing line, a waffle cookie company, a graphic novel or a delivery service.

At set intervals during this time of networking and presentation, conversations were paused and the room was silenced for “audience pitches” on the center stage. TIA ventures NaSo, Natural Beauty Breast Prosthesis, Strata Printing and The Viewing Room pitched their ideas to the hall and then answered two to three audience questions.

Katie Finnegan, an alumna from Colgate’s Class of 2005, was presented with Colgate’s Entrepreneur of the Year Award. Finnegan is the Principal and Founder of Store No. 8, an incubator for Walmart eCommerce. In her acceptance speech, she praised the value of a liberal arts education.

“[It] teaches you how to think… it’s more the process than the actual subject material,” Finnegan said.

“I truly believe that I wouldn’t be standing here doing what I’m doing today without fellow alums…. Just being part of the same Hamilton, New York community is enough for everyone here,” Finnegan said.

Next on the agenda was a panel of alumni, which included Finnegan, as well as CEO of Ridgewood Capital and an investor in the energy, power and environmental industries Bob Gold ’80, the co-founder/CEO of TAPP Media and former vice-president of CBS News Jon Klein, and J President/CEO of Sharp Independent Pictures Jeffrey Sharp ’89.

When asked to give three real things needed to succeed as an entrepreneur, aside from just “passion,” the panelists stressed timing, team cohesion, realistic implementation and for new entrepreneurs, coachability.

“If you’re a young entrepreneur and you don’t come across as receptive and coachable, people are just going to pass,” Gold said.

As the discussion continued, Klein stressed the importance of creating a realistic business plan.

“Creating a road map is really essential,” Klein said, “It gives you the ability to look at any point in time and say: are we where we’re supposed to be? And if we’re not, why not? Get to the root causes of it, start to address them, and revise your plan accordingly.”

Sharp offered tips for dealing with failure in the film industry.

“Have a lot of projects ready to go. If you put all your eggs in one basket, you could be completely surprised, devastated to the point where you can’t get back up again. In my business, I see that a lot,” Sharp said. The most anticipated event of the weekend, Shark Tank, began after the Founder’s panel. Four student groups took to the stage and gave a two minute pitch followed by six minutes of question and answer with the alumni in hopes of receiving funding and other support for their ventures.

The panelists listened to each group and then left to deliberate, while Colgate senior and alternative pop artist Lisa Heller performed her emotional new single “Quicksand,” a song that carries a message about inequality and the pursuit of the American dream.  ISO, the first group to present, is a creative content agency founded by seniors Brandon Doby and Lauren Sanderson. Impressed by their work and their brand, Sharp offered them the opportunity to develop a project with him as a producer.

Senior Patrick Crowe, the founder of Loophole, felt he gained valuable connections and received two alumni orders of his product, a stick-on phone wallet with a finger loop that prevents the phone from slipping out of your hand.

Gipper, a semi-automated social media service for campus sports administrations, was the runner up, and received office space in LA from Finnegan.

But the official winner of this year’s Shark Tank was UCan, founded by first-year Christina Weiler. UCan is a non-profit organization that supplies recycling bins to campuses and donates the proceeds from collected bottles to feeding the hungry. Finnegan saw great potential for Weiler’s venture to succeed on a much grander scale, and offered to introduce her to the facilities team at Walmart.

All teams received grants from alums that will be instrumental in the next step of growing their businesses.

“The money is definitely going to go to a good place; it’s going to help pay for the fixed costs of running the program, of scaling at other universities, and ultimately creating a sustainable way to feed hungry people,” said first-year Shelby Stevens, a Student Ambassador for UCan.