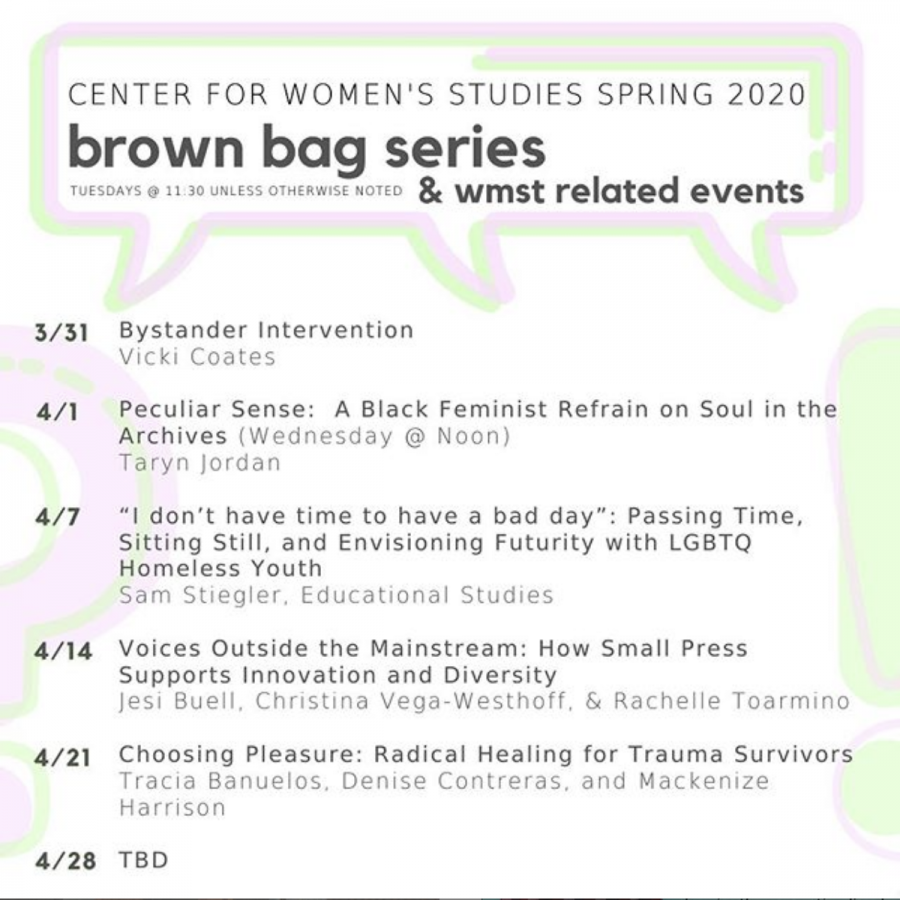 The Center for Women’s Studies (WMST) moved its planned Spring Brown Bag lecture series to Zoom in an effort to continue their education and engagement with the Colgate community.

Program Coordinator for Shaw Wellness Institute Vicki Coates led and moderated the first Brown Bag lecture of the virtual series on March 31. Along with Bystander Intervention facilitator senior Carolyn Robb, Coates discussed the Bystander Intervention framework that is used to facilitate sexual assault prevention trainings to all first-year students. Prior to the lecture, Coates joked with a fellow faculty member that this Brown Bag would serve as a metaphorical ‘guinea pig’ for subsequent events. However, Coates said she was surprised by the fluidity of the discussion and ability of Zoom to meet their needs.

“After teaching students how to be an active bystander in situations involving bullying, hazing, harassment, discrimination, and alcohol use, we were able to use the breakout feature of Zoom. Each breakout room contained groups of three students who were able to take their new knowledge and work through scenarios that required them to decipher what intervention method they would use,” Coates said.

“The Zoom platform, though successful in this instance, is not ideal for Brown Bag lectures. It is, however, important to hold these experiences over Zoom because they are important to the student experience,” Coates said.

In addition to the hesitancy of embracing remote learning for a discussion-based event, the first known incident during University programming occurred at a WMST Brown Bag lecture on April 1, in which a participant used the online forum to share inappropriate messages. Following this incident, precautions were proposed to prevent future problems.

Visiting Assistant Professor in the Department of Educational Studies Sam Steigler presented a lecture “‘I don’t have time to have a bad day’: Passing Time, Sitting Still, and Envisioning Futurity with LGBTQ Homeless Youth” as part of the series April 7. Prior to the lecture, Steigler said he planned on keeping the content of his discussion the same, regardless of the move to Zoom. The lecture discussed a paper that considers the complex dichotomy between LGBTQ homeless youth and concepts of home.

“It [considered] how LGBTQ youth resist and avoid normative conceptions about time, space, and growing up by examining how these young people utilize and embody certain places in the city in ways that stand counter to the ways they are intended to be used,” Steigler said.

Instructional Design and Web Librarian Jesi Buell, along with Christina Vega-Westhoff and Rachelle Tarmino led “Voices Outside the Mainstream: How Small Press Supports Innovation and Diversity” on April 14. Buell commented that the lecture’s focus on the publishing industry comes at a time when attention to the media and media credibility becomes increasingly important. Buell commenced the lecture by explaining the distinctions between two components of the publishing industry: big five publishers and independent, also known as ‘indie’ publishers.

“We [explored] the positives and negatives of both sides, giving personal experiences as publishers/authors/translators, and ending with lists of resources for different types of writers on how to get started and how to find support,” Buell said.

In regards to the transition to Zoom, Buell said she didn’t anticipate needing to change the nature or format of the presentation prior to the event.

“Very little will change. It is a traditional format of presentation and then Q&A. The interactivity between presenters and audience is still feasible with Zoom, if not somewhat more stilted,” Buell said.

Buell said she feels hopeful that the transition online will increase participation.

“On the other hand, people that wouldn’t have been able to physically make it will now have the opportunity to participate, which is great,” Buell said.

WMST Program Coordinator Odette Rodriguez oversees the transition of programming to Zoom. The recent threat of “Zoombombing” resulted in precautionary measures going forward. Although the incident at a WMST event did not occur during her lecture, Coates said that Odette Marie Rodriguez sent an email to all involved in the lecture series about the change in registration for these events. The Maroon-News has reached out directly to Rodriguez for comment but has not received a response.

“To ensure the security of our Brown Bags we will be requesting folks fill out a registration form (name and email) in order to access the link. I have included links below including the link for today,” Rodriquez said in the email. “I have been working with the web team to ensure I am making events as secure as possible.”

Coates shared that a common goal of Women’s Studies Facilitators is for students to continue showing up and engaging in important discussions, even if the discussions ensue remotely. The Center for Women’s Studies also hosted a discussion titled “Choosing Pleasure: Radical Healing for Trauma Survivors” on April 21 in collaboration with Haven and a final discussion on April 28, “(Il)legible Bodies: Gender, Sexuality, and Contemporary Dance in Senegal”.