How and Why You Should Be Zining in Quarantine 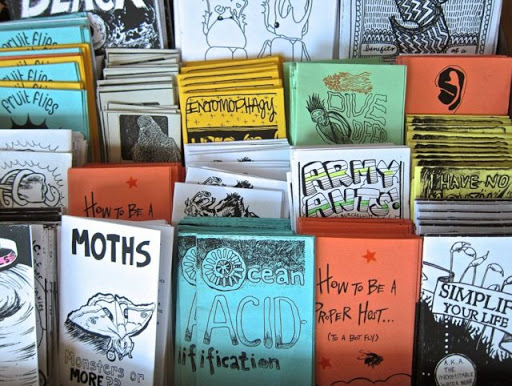 Punks, sci-fi fanatics, Frank Ocean and Kanye West are just a few names who happen to be zine enthusiasts. What’s a zine? Although it’s similar to a mini-magazine, the word doesn’t have its origin in the word magazine. Coming from the word fanzine, zines started as independent publications by fans of certain things. Now, zines are usually paper-based booklets that are made by hand and self-published.

Some argue that zines could go as far back as when self-publishing began, which includes Gutenberg and Martin Luther. Others say that the first modern wave of zines were done mostly by science fiction fans in the 1930s. Regardless, they’ve been around for a long time. Over time, the beats and other counter culturists took on zines in the 60s and 70s. Next came the punks.

The punks of New York City, Los Angeles and London widely popularized zines. Fans made publications about their favorite bands or fashion and passed it to their friends. Historically, zines have largely been made by people whose voices might not otherwise be published and popularized. Zines can be a protest, or they can be a sign of resistance. They can be anything the creator wants them to be. There are no rules and there are endless possibilities—that’s the beauty of zines.

So where to begin? Pick some subject (a person, a place, a show, an artist, a food, etc.) and pick your materials. It can be blank paper, newspaper or just about any object you wish to be creative with. Traditionally, zines have been made by hand or typed out before being photocopied. The hand-made and low budget looks are signatures of the zine aesthetic, and something to embrace as you begin working on your zine.

These socially distanced times of quarantine are a perfect opportunity to get into the art and practice of zining. At the heart of the punk movement, there’s the DIY ethos, which is encapsulated in the heart of zines, too. Simple as it may seem, DIY is what it sounds like. It’s making do with what you’ve got and making the most of it.

Since the school closed, I started a serial zine called “The Surreal Times.” Each day, I try to capture the moment and express my reality. I usually spend a half-hour to an hour working on my publication. Every day, there’s a new format and usually new content. There have been poems, maps, stats, quotes, lyrics, newspaper clippings and random objects found around my house. It’s a way of taking what’s going on in the world at large and trying to capture it on paper.

For the first issue, I stapled some playing cards together, cut out some pieces of paper the size of the cards and wrote my zine on those pieces of paper that I later taped onto the cards. For that one, I explored finding out about going home, my road trip from New York to Colorado and the start of quarantine. On other days, I focused on different things, from the recent pink moon to writing a letter to the post-COVID-19 reader.

A big part of zine culture is community. Sharing your zines with other zinesters or fans of whatever subject you engage with is popular and encouraged. Beyond sharing passion projects, zines can serve a larger purpose. Frank Ocean released his Blonde album through his zine called Boys Don’t Cry. In a series of zines, Kanye West has debuted some of his fashion lines.

Zines can be a great outlet and mode of self-expression. Making zines right now is also a way of documenting this historic time. They function in a similar way to newspapers by capturing the times and in a sense are like personal periodicals. Whether they’re purely text-based, a collection of photos, copy-pasted material, or some combination, it doesn’t matter. What matters is that each zine is unique to the individual. Zines can be rebellious and are full of introverted passion. Trust the process.

What have you been doing during quarantine? What music is on your playlist? What is something that you’re passionate about? What is COVID-19 to you? One or all of these questions can be a place to start. Get involved and share your zine–we want to see it!