The Colgate Maroon-News • May 9, 2020 • https://thecolgatemaroonnews.com/23593/news/religious-life-provides-remote-programming-for-passover-easter-and-ramadan/ 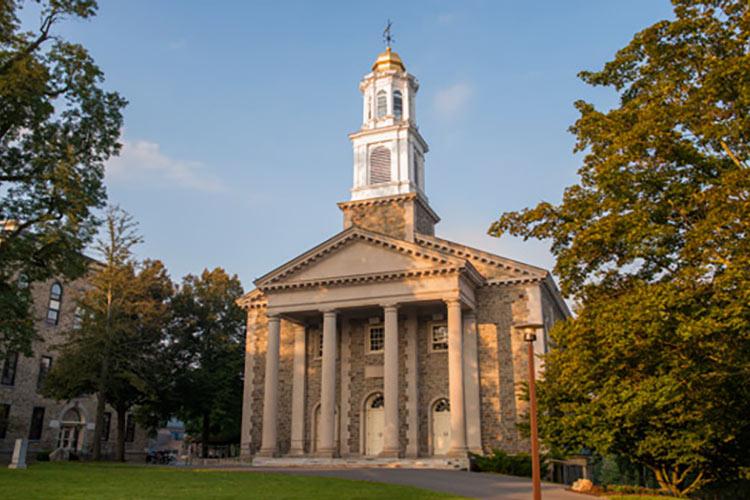 University Chaplains have worked to provide virtual services and support to students amid significant holidays over recent weeks, including Passover on April 8-16, Easter on April 12 and Ramadan on April 23 through May 23. Following the University’s email on March 12 that officially advised students to leave campus and return home if possible, the Office of the Chaplains and various members of Religious Life prepared to move Religious Life programming online.

As a member of the University’s Emergency Operations Command and the Office of the Chaplain, University Chaplain and Protestant Campus Minister Corey MacPherson played a significant role in the transition.

“[The Emergency Operations Command] wasn’t originally created for this type of emergency, but for the first few weeks, a group of about 50 of us were meeting for long periods of time, several hours a day for several days a week. We still meet twice a week for several hours a day and advise the university on all steps that need to be taken moving forward, so that’s been a big part,” MacPherson said. “The other part is [addressing] what religious life support looks like for students at this time.”

According to MacPherson, there was no official timeline for Religious Life to follow in the virtual shift.

“Religious Life was obviously not a top priority right away, and rightfully so. Health, safety, moving home, classes: there are just a lot of other things [to focus on]. We all met with several students early on at that time who needed to chat and process so that was, I’d say, the first couple weeks,” MacPherson said. “A lot of offices around the [Dean of the College] were helping students transition into places to live…which was probably the best way to help the campus at that time.”

MacPherson added that one of his reasons for not immediately offering University Church services was that he thought it was important for students to continue to be a part of their own church community at home with their families.

“As a chaplain, I’m there to support them while they’re away from their religious community and not be their primary religious community. Now, some students don’t have a religious community at home and they only have University Church or Newman Community here, and so we do have things to offer [to them],” MacPherson said. “It is sad not to gather together, [however]. But we’re all in the same boat; we all realize that we can’t do that so we need to rethink things. It’s really been a good challenge for many religious traditions from a theological perspective. For the Catholic community and for the Protestant communities, we can’t have communion together [physically], so what does it look like virtually?”

Currently, Religious Life programming is being conducted via meetings in Zoom or live streaming over Facebook.

“All three of our chaplains are already doing services, and are meeting online, both for students and faculty and staff. Rabbi Baron hosted services via Zoom for Passover and will continue to offer Shabbat services for the remainder of the semester. [Online meetings] are [also being conducted over Zoom] for groups like Friday-night Shabbat, Saturday morning text-study with the Jewish faculty, Tuesday nights for the Colgate Christian Fellowship and the Colgate Christan Athletes,” MacPherson said. “University Church live-streamed their Sunday service on April 26, [and] The Newman Catholic Community were able to participate in services remotely during Holy Week with Father Jason at St. Mary’s and St Joan’s churches via their Facebook page. They’ve been linking all the Catholic students that don’t go to a home parish with their family, so that they can connect into that mass”

“[These masses were] especially important during Holy Week and Easter weekend, a time that is so crucial to our faith community,” Logar said.

In adjusting to the distance, the Newman Catholic Community has implemented various methods of staying connected open to the community, including candlelit Mass over Zoom, a movie-watching program focusing on films with Catholic themes, a weekly Rosary program and shared Wednesday prayer, which Logar leads.

“[We] talk for about an hour about how we’re seeing and living our faith right now….We’ve done similar things on campus before, and it’s a really nice way to keep in touch and maintain some sense of routine while grounding ourselves in our faith,” Logar said. “The transition has been challenging at times because so much is gained from growing in our faith through time spent with one another, and doing this all remotely is just so new, but I think that we’ve been taking a lot of steps towards ensuring that we can stay together as a community and lean on each other’s faith during a challenging time.”

“[My wife] and I were delighted to host several guests from Colgate via Zoom at our (Passover) seders. I am also using Zoom to connect interested community members for shabbat services,” Baron said. “In addition to students, faculty and staff, and community members, our participants currently include an Army officer currently deployed to Kuwait. Working with Physical Education, I hope, in the near future, to offer an online elective for students on Jewish resiliency.”

Further support was offered to students, including making sure any leftover belongings were stored in the Saperstein Center after their departure and meeting dietary requirements, as one Jewish student remaining on campus had access to specially prepared Kosher for Passover meals throughout the holiday.

“We’re continually following up on making sure meals are available, both Kosher and Halal. For Muslim students [reamining on campus] past commencement date, we’re confirming [with Chartwells] whether or not they’ll be able to provide Halal foods as [that] is when Chartwells is probably going to cease serving, so we’re just trying to make sure all the religious dietary needs are met in that regard,” MacPherson said.

“We also [offer support in regards to] the Counselling Center. One of our chaplains, Mark Shiner, has agreed to co-lead a grief support group [as] you students may not only experience loss of grandparents or family [members], but also your semester, your year, your friends. I don’t think students realize their grief and trauma, so we support the counseling center in that way,” MacPherson said.

The future of Religious Life in the fall depends on when students return to campus, according to MacPherson.

“We’ll still continue to do our weekly meetings and gatherings…we would then decide [how to proceed] and we’d just have to evaluate if there’s a need,” MacPherson said. “A lot of our Muslim students are international and are from countries where there’s a majority Muslim population, where they have Imams and beautiful, wonderful services. They’d probably likely rather do Jummah there than [online]. But, hopefully students are able to come back in the Fall without issue.”

Muslim Student Association (MSA) President sophomore Usman Ahmad also brought up the likelihood of students celebrating at home with their families, as well as how MSA leadership is discussing the feasibility of possible virtual gatherings.

“We haven’t resumed the MSA activities since we have gone virtual,” Ahmad said. “We are [now] thinking of having one iftar together over zoom but we have to iron out the idea because most people like to have iftars with their families. However, Islam preaches that everyone who can, should gather to have iftar together as it serves to strengthen the community.”

According to Ahmad, approximately seven or eight practicing Muslim students remain on Colgate’s campus. The Muslim Chaplain at Claremont has invited Colgate Muslim students to an online teaching every night of Ramadan, and Colgate chaplains have offered support through supplying meals throughout the entirety of Ramadan.

“They realize how significant this month is to our community, so they have left no stone unturned to help and support us any way they can,” Ahmad said. “The chaplains have been in contact with Chartwells to make sure the Muslims are given food for these Suhoor and Iftar meals. In addition, the Muslim faculty and staff have really stepped up to support the Muslim students on campus, by preparing meals for them and helping in any other way they can.”

Moving forward into the summer the Office of the Chaplains and the Dean of the College offices have started to consider summer programming for the some 200 students remaining on campus.

“[Continuation of online meetings over the summer] will be based on each group, but we’re certainly available and willing to do it,” MacPherson said. “The last few summers, the Chaplains Office hosts dinners on Tuesday night…we’ll probably have to change the meal format but we’ll still like to do something one night a week just to try to support students.”

Reflecting on the transition to online programming in the midst of the COVID-19 pandemic, MacPherson added that increased interest in religious life as a result of the current global state has been encouraging.

“There’s actually been (and this is true across the country if not the world) where religious gatherings around the world, numbers-wise, actually increase since being virtual which is really interesting. Zoom has allowed it to become more of a community-[based discussion] which is a really healthy thing to experience,” MacPherson said. “There’s some really wonderful and positive things that have come [with transitioning digitally] but I think we’re all still trying to [process]. I think we’re just trying to do the best we can [now] and, [later], do a pretty deep assessment for how it went and if we would want to continue if we have to go digital in the fall.”