The Colgate Maroon-News • May 18, 2020 • https://thecolgatemaroonnews.com/23645/commentary/fulbright-scholars-unite-digitally-to-demand-clarity-in-wake-of-coronavirus-crisis/ 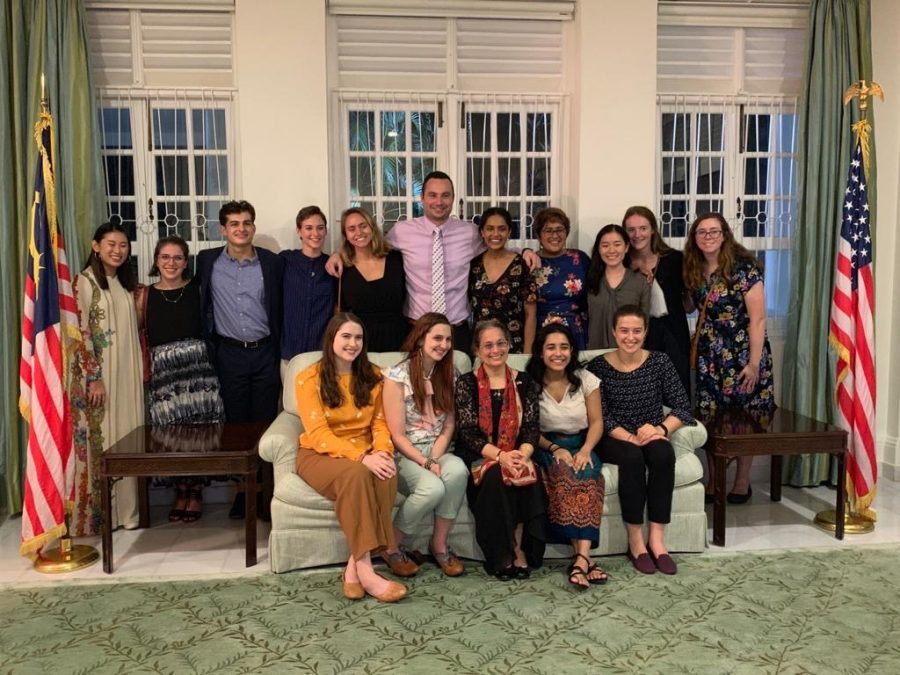 Lundt and her fellow state-mates in Sabah with the US ambassador to Malaysia.

Forced to return to their respective homes following the growing severity of the COVID-19 outbreak, scholars of the prestigious Fulbright Program have spent the past two months painstakingly collecting correspondence with program officials and personal accounts from displaced fellows in an effort to address what many students felt was a mishandling of the situation.

Despite signing work contracts that denoted a 10 months stay in their country of assignment, supplemented by housing, a stipend, a car and health insurance, scholars saw these resources disappear before their eyes following Fulbright’s unprecedented decision to suspend their programs worldwide in mid-March.

In a series of letters, emails and WhatsApp messages sent by the Fulbright program, members of the Malaysian-American Commission on Educational Exchange (MACEE) and the United States Embassy to Fulbright Malaysian English teaching assistants (ETAs) concerning early departure, the lack of consensus on action plans is apparent.

Creating a timeline from March 11, 2020, the earliest indications that trouble was in the horizon for the scholars, to April 8, 2020, after the program had been suspended and remaining scholars sent home, these correspondents paint a portrait of the rapid worsening of the COVID-19 crisis and a program struggling to provide its scholars with appropriate guidance. Obtained through Colgate alumna and Fulbright scholar, Jennifer Lundt ‘19, the correspondence details the discouragement of travel notices, urgent departure notices, and the eventual termination letter from the program’s administrators and coordinators. Despite the lengthy documents they received, however, several scholars argue that the support they received from the program was inconsistent, non-existent or inadequate, at best.

The inappropriate use of WhatsApp by U.S. Embassy workers to convey news of their inability to extend assistance to sick scholars and the Fulbright program’s formal suspension was noted by recent graduate of Providence College and 2020 Fulbrighter Kevin Cranney. He also expressed his frustration with messages that he felt were no more than “unprofessional tactics of guilting [scholars] out of Malaysia into a more dangerous environment—traveling through several international airports before returning to the USA, where there were more cases and no health insurance or housing for some of the grantees.”

“I got threatening calls every day telling me if I didn’t leave then, they would take away my [Fulbright alumni] status and revoke my visa if I didn’t get on the plane,” she recalled. Although Lundt acknowledged her privilege in having a home to return to as well as sufficient health insurance, her fears were mostly for many of her fellow scholars some of whom “are homeless, immunocompromised or live with abusive families or families with an elderly relative.”

Lundt and Cranney both expressed their dismay about the situation of financial instability this crisis placed the now unemployed scholars within.

“We did what we could,” Cranney said. “Some having to depend on the generosity of friends for a place to stay, others spending large sums for a two-week hotel quarantine away from family members.”

Cranney explained that in contradiction to the Fulbright program’s contract which guaranteed pay through October, MACEE arbitrarily decided to pay the ETAs only through June, transferring “a measly 1500 [dollars] into [their] American bank accounts.” While such an amount was sufficient to sustain oneself in rural Malaysia; in America, the money would not carry the displaced scholars very far. Despite expressing anxiety over matters like these, scholars received little response from program officials about whether their grants would be dispersed to them at later dates. Cranney and Lundt were ready to take action.

Armed with a growing list of actions deemed as unsatisfactory conduct from the Fulbright Program, Lundt, Cranney and hundreds of 2020 Fulbright scholars have since united through social media and file storage platforms in a movement they call “Fulbright Crisis.” The files include petitions, comprehensive lists of post-suspension concerns and proposals on how to hold the program accountable for a difficult situation made more challenging by opaque bureaucracy. Additionally, a manifesto declared the Fulbrighters’ solidarity for their disenfranchised peers, the necessity of recruiting alumni to support their efforts, and their plans to reach out to the media and government officials regarding their situation.

Notably, the files also include a 28-page letter to the U.S. State Department’s Bureau of Educational & Cultural Affairs (ECA), MACEE, the Institute of International Education (IIE), the US Embassy of Malaysia Representatives and the Corporate Sponsors of the Fulbright Malaysia ETA Program. The letter demands the aforementioned institutions fulfill the scholars’ request to have their grants renewed and be allowed to return to Malaysia as ETAs for the 2021 year, without reapplication, citing the program’s automatic conference of alumni status as inadequate consolation. And with each detailed demand, call to action, or request, the scholars supplied deeply personal anecdotes about the impact their assignments left on their lives as well as the anxieties the abrupt ending produced, injecting a strong pathos throughout the document. Consolidated into a Change.org petition, as of May 17 the appeal has garnered 2,995 signatures.

“We can either cling to the bureaucratic policies, clauses and rules of the past, which are fundamentally unsuitable for this situation,” recent University of Portland graduate and Fulbright Malaysia ETA Sitara Nath said. “Or we can envision an innovative future for the Fulbright program that is truly grounded in our shared values for cross-cultural exchange and building community.”