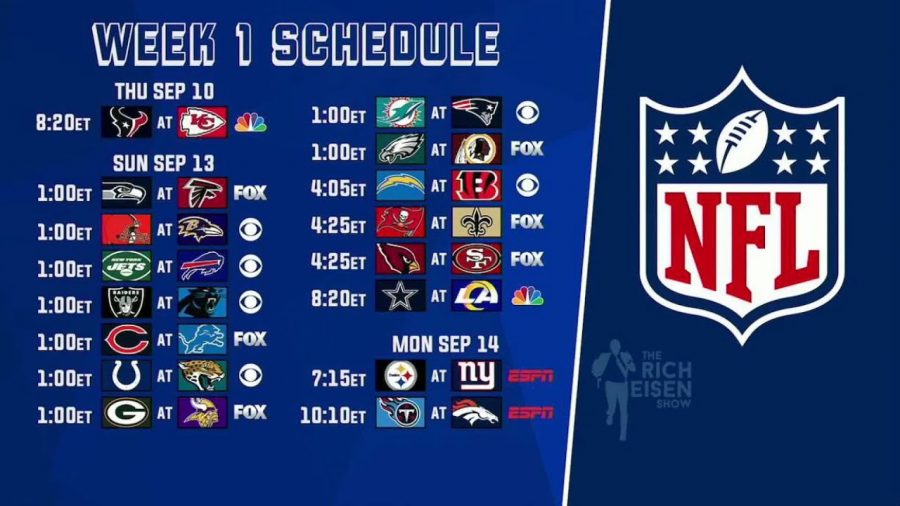 The NFL released the entire schedule for the 2020-21 season on May 7 and there are some intriguing matchups coming our way. Obviously, there is no guarantee that any of the games will be played given the outbreak of COVID-19, but we can all cross our fingers and hope.

With the return of several international sports leagues, there is reason to believe NFL players will be strapping their pads and helmets on and going back to work in the fall. And after such a busy offseason and exciting NFL draft, football fans have a lot to look forward to in the upcoming season.

Let’s take a look at some of the best matchups of the 2020-21 NFL season, highlighting some of the most intriguing games.

What better way to start the NFL season than with Chiefs legend-in-the-making quarterback Patrick Mahomes and Texans star quarterback Deshaun Watson’s duel. The two teams met in the playoffs last year in a strange matchup in which the Texans found themselves ahead 24-0 at one point, only to be dismantled 51-31 in the end by Mahomes and company. The Texans traded away star wide receiver DeAndre Hopkins to the Arizona Cardinals in the offseason and could be looking at another big loss in week one at Arrowhead Stadium. Whatever the final score is, the talent at quarterback in this game will be must-see television.

In a late afternoon showdown, quarterback Tom Brady and his Tampa Bay Buccaneers will face off with quarterback Drew Brees and the New Orleans Saints. With all the media attention the Bucs have had during the offseason, we will get to see right away if they are legitimate contenders in the NFC South. We will also get to see two of the game’s greatest quarterbacks go head-to-head. Not to mention, Bucs tight end Rob Gronkowski will be making his return to football after a brief retirement.

I think a lot of people hoped this would be the AFC Championship Game last season. Ravens virtuoso quarterback and reigning MVP Lamar Jackson will be on a revenge tour in 2020 after suffering defeat to the surprising Tennessee Titans in the AFC Divisional round. Meanwhile, reigning Super Bowl MVP and champion quarterback Patrick Mahomes is looking to cement himself as one of the greatest to ever play the sport. You are not going to want to miss this duel in what could be the best game of the entire NFL season.

Young and promising reigning Heisman-winning quarterback and College Football Playoff National Champion Joe Burrow gets to face off with ex-Heisman winner and reigning NFL MVP Lamar Jackson in Baltimore in Week 5. This matchup should be a win for the Ravens, but it will be interesting to keep an eye on the stat lines of two talented quarterbacks.

Two all-time great quarterbacks will face off when Aaron Rodgers and the Green Bay Packers travel to Tampa to play Tom Brady and the Bucs. Obviously, this matchup would have been much better 5 years ago, but still something to watch for in Week 6.

A rematch of the NFC Championship Game from last season. Aaron Rodgers and company will have to play a completely different game if they want to avenge either of their two embarrassing losses to the 49ers from a year ago.

The old head versus the newcomer. Tom Brady versus Patrick Mahomes. A passing of the torch. Need I say more? Just watch and enjoy two great quarterbacks at opposite ends of their respective careers.

We will get to see whether Broncos quarterback Drew Lock and his young receiving corps of Jerry Jeudy, KJ Hamler and emerging star Courtland Sutton can make waves against the reigning Super Bowl champions.

Rookie quarterback Joe Burrow versus veteran and future Hall-of-Famer Ben Roethlisberger. This could be a fun, late-season matchup between two hopefully promising squads.

These two teams tend to play their best football late in the season and there always seems to be the winner of the NFC East on the line when they face each other late in the year. Expect a battle for the division just like we have seen so often recently between talented quarterbacks Carson Wentz and Dak Prescott.

It’s the last game of the season and it should be a great one. Seattle quarterback Russell Wilson is in the heart of his prime and definitely has another few Super Bowl-caliber seasons left in him. The 49ers will look to defend their NFC West crown and a likely bye in the playoffs.