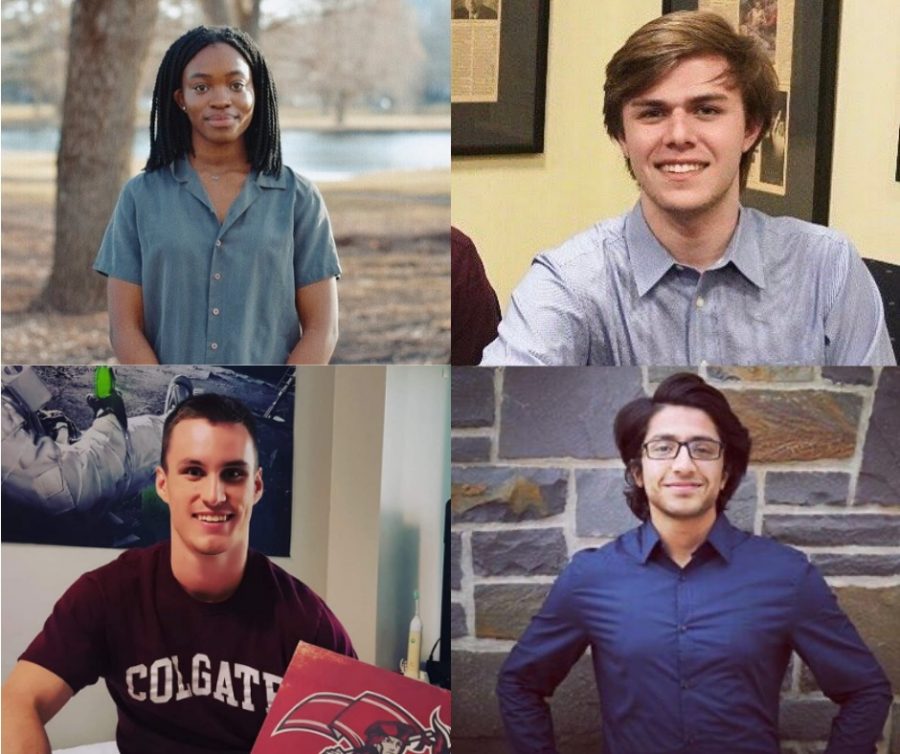 This article is the second part of a two-part SGA Election series. Part one outlined the changes to this year’s executive election positions and procedures.

The Student Government Association (SGA) executives for the 2020-2021 academic year were announced Saturday, May 2 after the voting period for the president and vice-presidential positions closed earlier that day. Junior Amarachi Iheanyichukwu won the contested presidential election against junior Ben Becker. Becker also ran for VP of communications, winning the position in an uncontested election, as did incoming VP of finance sophomore Usman Ahmad and VP of Student Organizations junior Cole Boquist. The VP of advocacy positions will remain unfilled until a special election is held in the fall after no student ran for the position, according to election commissioner Phoebe Sklansky.

Iheanyichukwu said winning the election for president was a powerful moment for herself and minority voices on campus.

“To my knowledge, there has never been a woman of color student body president at Colgate so winning this election was an extremely powerful moment for me,” Iheanyichukwu said. “It felt symbolic of my vision for our campus, a place where marginalized voices are empowered and allowed access to its mainstream society.”

Iheanyichukwu has served in SGA since her first year at Colgate. In that first year she served as a senator, then chair of the Student Affairs Committee in her sophomore year and currently as a junior class senator. In addition to SGA, Iheanyichukwu is involved in the Students Affairs Board, Konosioni Senior Honor Society, Link Staff, Greek Life, the Diversity, Equity and Inclusion (DEI) committee for Greek Life, and the Maroon-News. As SGA president, she will also serve as the student representative on Dean of the College Paul McLaughlin’s Task Force on the Reopening of the Campus.

“I hope to actualize an equitable future for Colgate where access to the mainstream community and a wonderfully empowering college experience is a reality for all students regardless of race, gender, class and other facets of their identity.”

In addition to her focus on DEI, Iheanyichukwu emphasized her passion to support the local community of Madison County.

“I am hoping to build stronger connections between our university and the members of the greater Madison County community….I would love to see a meaningful collaboration between the Konosioni Honor Society and the Student Government Association that repurposes some Colgate resources to provide our neighbors with greater access, social mobility and support,”  Iheanyichukwu said.

Becker, who lost the election for president, won the position of VP of Communications that he ran for concurrently.

“I think most importantly, we need this role to work on updating information the SGA is supposed to be providing to the students,” Becker said.

Becker addressed the lack of communication between the SGA and the student body, which comes from the incompleteness and inconsistency of the SGA website and newsletter. As the new VP of Communications, Becker plans to focus on improving transparency by regulating and standardizing these platforms.

“I’ve always put all of my effort into SGA,” Becker said. “More than any other extracurriculars and sometimes even schoolwork.”

Becker has served on SGA since his first year at Colgate. Concerned with bridging the gap between students and the administration, Becker hopes to create a student government founded on transparency and listening to the student body.

During his time in the senate, Becker served as transparency liaison his first year following his nomination to Speaker of the Senate. In this position, he helped collect votes and collaborate with the Communications Director to transfer information. During his first year, Becker also  served on the Government Affairs Committee, where he constructed and passed a bill that ensured SGA kept up their newsletter, standardizing it for future years. He served on the Academic Affairs Board his junior year, helping to ensure a smooth transition to the P/X grading system for online classes.

He also expressed his support for Iheanyichukwu’s platform promoting diversity, equity and inclusion.

“It’s an incredibly important topic that we need to be focusing more on, especially with the administration,” Becker said.

Outside of SGA, Becker is a former member of the Debate Society and a current member of the a cappella group the Resolutions (Resos).

Elected VP of student organizations, Boquist said he hopes to facilitate positive relationships between student groups and the student government.

“I really want to make the SGA more accessible to student groups who want to get approved,” Boquist said, emphasizing his intentions to have SGA running with smoother and more efficient operations and logistics.

Boquist said he feels Colgate needs greater transparency between the student body and the executive branch, and more formal procedures for approving clubs. He spoke on his hopes to get more bills passed, and refine the SGA constitution.

“I’m running for this position because I think it’s something that we needed,” Boquist said. “I think I’m a strong candidate because of my experience and knowledge of how SGA works. I’m willing to step up to the plate.”

Boquist served on class council his first year, and in senate during his sophomore and junior years. He is also a member of the club baseball team and the college Republicans, along with working at the local trap range.

Ahmad, incoming VP of finance, discussed reform of BAC rules and regulations as his motivation for running for the position.

“This past year, the wonderful treasurers (of the BAC) Jack [Reston] and Margo [Werner], along with the SGA treasurer Nick [Quinn], started the process of revising the (BAC) constitution, and also increasing awareness about the rules. I want to continue this process on a larger scale to account for every single student voice on campus, to make sure the funding process aligns with the desires of the students,” Ahmad said.

Ahmad has served an SGA senator and International Students Liaison his first year and serves as the current Secretary of Campus Affairs. Outside of SGA, Ahmad is the president of the Muslim Student Association (MSA), in addition to serving as a community leader (CL) for Ciccone Commons.

Ahmad echoed his focus on diversity, equity and inclusion, specifically in relation to University funding for organizations and events.

“Everyone brings something unique to the Colgate campus, something that everyone around them could learn, and I am passionate about playing my part in making sure all the students are given a fair opportunity to express their own values and ideas, and are never held back because they could not get approved for funding.”