The Colgate Maroon-News • May 26, 2020 • https://thecolgatemaroonnews.com/23670/news/university-announces-2020-faculty-awards-and-promotions/ 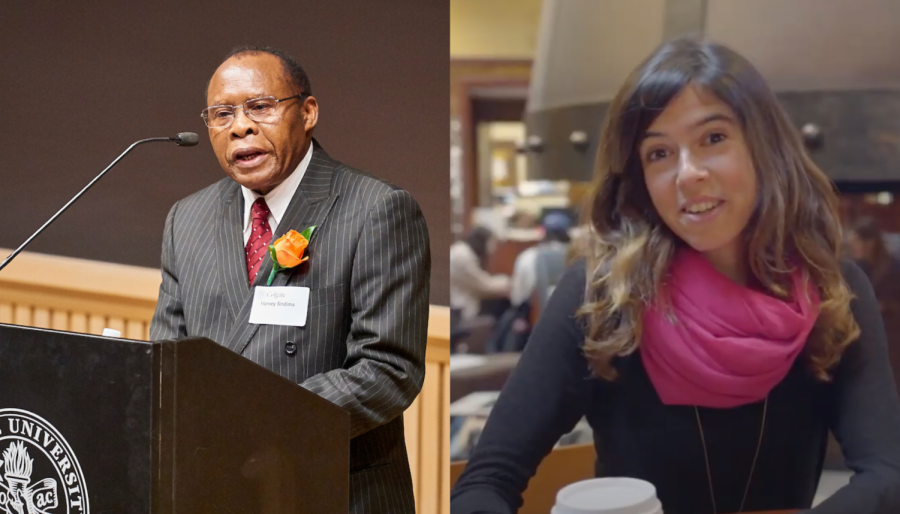 The University awarded two faculty awards and six promotions despite the semester’s disruption due to the COVID-19 pandemic. The Phi Eta Sigma Professor of the Year and Jerome Balmuth Award for Teaching were awarded to Assistant Professor of Spanish Marta Perez-Carbonell and Professor of Philosophy and Religion Harvey Sindima. The University also promoted three faculty members to full professor and three faculty members to associate professor and continuous tenure, according to an email from Provost and Dean of the Faculty Tracy Hucks on May 19.

Perez-Carbonell said she has never received an award like the Phi Eta Sigma Professor of the Year award before. The award is decided based on testimonials by students that are submitted online and reviewed by a committee of members of the Colgate Chapter of the Phi Eta Sigma Honor Society. The Phi Eta Sigma Honor Society is the first and largest national honors society for first-year university students, according to their website. In an email sent to the student body on February 4, Phi Eta Sigma and the 2020 Professor of the year Selection Committee defined that the award recipient is “selected for excellence in teaching, service and devotion to Colgate students in and out of the classroom.”

Perez-Carbonell was notified on May 1 of her award by an email chain started by President Brian Casey. She then received 13 emails from friends, colleagues, administrators and students that created a word puzzle for Perez-Carbonell to solve.

“I think by the third e-mail, I realized it was some kind of puzzle that I had to put together and by e-mail number five, I realized it was about me. It was such a fun way to find out. Associate Dean Lesleigh Cushing was the mastermind behind the plan,” Perez-Carbonell said. “I had no idea. I was definitely not expecting it and I am so very grateful to all the students who wrote letters.”

Perez-Carbonell is currently in Spain, where she spent her spring semester on a research sabbatical. She said her nomination by her students despite her not being on campus and the stress students are feeling due to COVID-19 made this award even more meaningful.

“I think these two things made it extra special for me because I felt connected with them during a time when, well, we all need to feel connected to those who matter,” Perez-Carbonell said. “I feel extremely lucky having had the chance to teach the students I have taught at Colgate. Feeling that your students are enjoying your class and learning new things is, without a doubt, the best part of a professor’s job.”

The Jerome Balmuth award is determined based on nominations from current students and alumni. Hucks defined the award in an email written to the Colgate community on February 7, when she wrote to solicit letters of nomination.

“The prize will be awarded to a faculty member whose teaching is distinctively successful and transformative, recognizing that such distinction can be achieved through a broad spectrum of methodologies ranging from traditional to innovative,” Hucks said in the email.

Hucks also explained in the email that the award includes a cash prize, an event supported by the donor to celebrate the recipient, and the recipient will serve as speaker at the Baccalaureate service during commencement weekend. Hucks announced that Sindima had received the award in an email to the student body on April 27.

Sindima, similar to Perez-Carbonell, has never received this type of recognition. Sindimar shared the same feelings of surprise and expressed gratitude toward the alumni that nominated him.

“The award means a great deal to me. First and foremost it means a mission accomplished. I came to Colgate to do one thing, teach,” Sindima said. “I am very gratified that those whom I taught say I did it well. What else could top that? Every year students express their gratitude to me for my  teaching, but this award is the crown jewel of praises and honors to me.”

While Perez-Carbonell attributes her success to experience with her students, Sindima attributes his success to the engaging teachers that taught him while in school. Perez-Carbonell said she can think of many people and experiences that contributed to her success during her time at Colgate, beginning when she arrived in the United States from London in 2016 amidst a tense presidential election. She said she recognized the potential for a close relationship with her students as they asked to meet and share opinions and feelings. She credits experiences like pizza dinners during movie screenings in Lawrence, museum trips with students in her class SPAN353: Modern Spain in Crisis and cooking contests with her class CORE191C: Spain.

“Laughing with students from [my class ] Short Fiction in Contemporary Spain while we were trying to act natural around the cameras; the thrill of publishing an article with one of my students and then seeing her succeed in her graduate school applications—Valedictorian Renee Congdon—and, of course, the many adventures shared during the semester in Madrid with the 14 students who were soon known as ‘los patitos,’” Perez-Carbonell said. “Each one of those students was special and each one made me want to be a better teacher and a better mentor.”

Sindima said transformative teaching is a gift he received from his teachers and he has followed their example like second nature.

“I am grateful that I always had teachers who loved teaching, and dedicated themselves to helping students for the students to produce nothing, but the best. My teachers considered each student a success story. All their students were diamonds in the rough,” Sindima said. “My teachers were very challenging, but never lowered the bar or graded on a curve. I cherish and love the models of teaching I learned from my teachers.”

Assistant Professor of LGBTQ Studies Danny Barreto is one of the faculty members that has been promoted to Associate Professor and Continuous Tenure, along with Assistant professor of Mathematics Silvia Jimenez Bolanos and Assistant Professor of Chemistry Jason Keith. According to an email from Dean Hucks, their promotion was approved at the Board of Trustees meeting on May 2 and will be effective beginning July 1.

Barreto explained that after six years, assistant professors undergo a review process in which their effectiveness as a teacher, impact of a scholar and contributions to Colgate are examined. This team consists of Hucks, Colgate faculty and researchers from other universities. Barreto said this decision takes almost a full academic year, with review of publications and curriculum in September, a decision by Hucks in April and approval by the Board in May.

“If the evaluation is a positive one, you are granted tenure, which students often think simply means you can’t be fired. In reality, it is really a commitment from the University to extend your contract indefinitely,” Barreto said. “The assumption is that by having had our scholarship and pedagogy validated in some way, we can continue to do work research and teaching that we believe will best serve the university and academia in general.”

Barreto explained that the review is based on teaching, scholarship and service. Set forms, syllabi, peer observations and other awards are things the University would’ve used in review of his teaching. For service, he said the University would’ve reviewed his work with ALANA and Haven, his service on elected committees at the Modern Language Association and the International Association of Galician Studies and his involvement with the Women’s Studies and Africana and Latin American studies. His scholarship, however, might have been a little bit more complicated as it is focused on sexuality and gender in Galicia, a region in Northwest Iberia.

“Although it’s part of the Spanish state, Galicia has its own language which is a Lusophone language that shares its roots with Portuguese. Since I regularly publish and present scholarly papers in English, Galician and Spanish, I’m sure finding scholars who could read and evaluate my scholarship wasn’t the easiest task for the university,” Barreto said.

Barreto said he receives this promotion with honor in the face of tremendous marginalization faced by the communities he studies and continuous discrediting of LGBTQ+ scholars and artists from Galicia and furthermore Puerto Rico, where Barreto’s family is from. Barreto also explained that Latinx factually accounts for less than five percent of all tenured faculty in the country.

“It’s incredibly heartening to know that the work you have done as a scholar, teacher and colleague is respected and valued by Colgate and across academia. That I am a first-generation college graduate, Latino and can be out about my sexual identity is a privilege that not many people have had,” Barreto said. “ I’m truly grateful to Colgate for opening the door for me and I think of tenure as an invitation from the university to push that door open even wider for the success of all our students.”

Barreto, Perez-Carbonell and Sindima all had different ways of celebrating amidst the COVID-19 pandemic. Sindima said he celebrated his award by saying a prayer of thanksgiving and Barreto and Perez-Carbonell both cited the pandemic as disrupting their celebration. Perez-Carbonell said she did not get to celebrate when she first received the award due to Spain’s severe lockdown.

“Isn’t that sad? I’m in Spain, which was under a very strict lockdown at the time and I am confined alone,” Perez-Carbonell said. “So I am saving the celebration for next semester, but this week, when the outdoor seating opened in cafés, I raised a glass of Rioja to all of you—¡¡Gracias!!”

Barreto also said he is saving his true celebrations for when he can share it with his friends, family and colleagues.

“This really was a collective effort and, as such, I would have loved to celebrate with all my friends and colleagues. Since going out wasn’t an option, we treated ourselves to the finest rations that we hoarded away in our quarantine cupboard,” Barreto said. “As soon as it’s safe to do so, I’ll celebrate with more friends and family.”