The Colgate Maroon-News • May 31, 2020 • https://thecolgatemaroonnews.com/23680/news/students-receive-recognition-in-university-and-national-awards/ 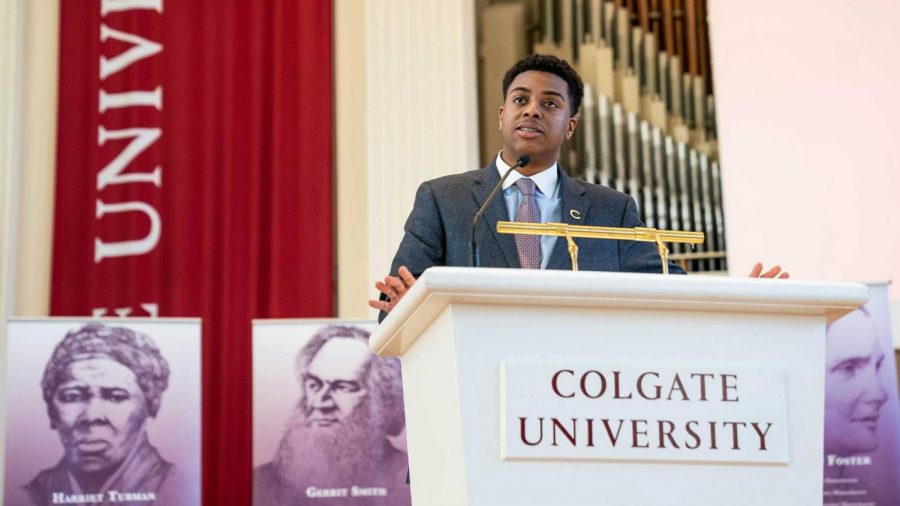 Colgate recently announced recipients of University student awards, national fellowships and scholarships recognizing student accomplishments in academics, community development, leadership and service. Senior Christian Johns received Colgate’s most prestigious student award, the Colgate Alumni Corporation 1819 Award. The 1819 Award is presented to a senior that represents the “spirit of Colgate” based on their character, scholarship and service to others, according to the University website.

Johns spent much of his time at Colgate advocating for marginalized identities on campus through his leadership in the Black Students Union (BSU), Brothers and the Student Government Association (SGA). Johns said he learned about the needs of communities of color at Colgate particularly through his time on the Africana, Latin, Asian, and Native American (ALANA) Affairs Governance Board as an underclassman. Johns said he dedicated himself to creating spaces for marginalized identities on campus.

“One of the biggest things I’ve realized throughout [my experience] at Colgate is that people feel like there just isn’t space for them,” Johns said. “Certain groups make them feel uncomfortable and that they can’t share the space that Colgate is.”

Johns said this realization translated into his further work as a campus leader.

“What are ideas and ways you can create communities and spaces for people so that they feel like Colgate isn’t just for one particular person — it’s for everyone?” Johns said. “At the end of the day, once you tear down those divisions, I think we’re all just looking for our places to belong.”

Senior Leah Weisburn also received recognition for her scholarship and service to the Colgate community as she garnered five awards and honors. Recognized for her leadership, academic performance and community contribution, Weisburn received the Class of 1997 Award and was named a Charles A. Dana Scholar. As a student pursuing a doctoral degree in the field, she won the McGregory Fellowship Award in Chemistry. She was a finalist for the Knight-Hennessy Scholars Program for graduate studies at Stanford University as well as an Honorable Mention recipient from the National Science Foundation Graduate Research Fellowship Program. While she wasn’t awarded a spot in these programs, Weisburn was commended for her strong applications. She will soon begin work on her Ph.D. in Chemistry at Massachusetts Institute of Technology (MIT).

Weisburn dedicated much of her time at Colgate to developing her passion for science, working as a chemistry peer tutor, lab assistant and research assistant in chemistry and physics. She also served as a Community Leader and member of the University Orchestra and the Chamber Players.

“I entered Colgate interested in the sciences and in figuring out how things work,” Weisburn said. “My first chemistry class at Colgate with Professor Emeritus Quang Shen introduced me to physical chemistry and the interplay of math and chemistry. I’ve spent the past several years exploring both subjects and their interactions in classes and in research.”

While many awards celebrate the achievements of members of the graduating class, some specifically commend the accomplishments of underclassmen. Sophomore Usman Ahmad received a George W. Cobb Award, given to first-years, sophomore and juniors who demonstrate leadership and effective influence among their peers. As the SGA Secretary of Campus Affairs, Ahmad oversaw student representatives to University governance boards and worked on issues of diversity, equity and inclusion. As President of the Muslim Students Association, he focused on a collaboration between religious groups on campus through interfaith programming.

“There is so much going on behind the scenes that no one really knows about,” Ahmad said. “This award is a nice way to recognize these efforts.”

In addition to University-wide awards, academic department awards acknowledge students’ efforts in their specific concentrations. Senior Carolyn Robb, a double-concentrator in Women’s Studies (WMST) and Molecular Biology, received the Women’s Studies Award for Academic Excellence. The award is presented annually to the senior concentrator with the highest grade point average within the department. Robb’s interest in women’s studies began with her first-year seminar, The Biology of Women. Robb said her time in the department became an integral part of her Colgate experience.

“[It] fostered my passion for biology, but also allowed me to learn about women’s health issues, social justice and health disparities based upon gender and sex,” Robb said.

Robb largely attributes her success in women’s studies to the department’s faculty. She particularly gained insight on issues she says fall outside of her lived experience.

“Every professor I had in the WMST department taught me something new, pushed me out of my comfort zone to think about things in new ways and inspired me to want to perform well and succeed,” Robb said.

Johns also expressed that many Colgate faculty members were paramount in his development as a scholar, including Assistant Professor of Educational Studies Brenda Sanya.

Johns noted many others who positively impacted him during his time at Colgate, including Professor of Educational Studies John Palmer and Professor of Political Science Nina Moore. Palmer helped Johns gain a deeper understanding of racial development, while Moore taught him how to use data over emotion when advocating for a cause. Moore’s data-focused methods especially guided Johns’ work on a multicultural Greek life initiative as SGA co-president.

“[The 1819] award is more of a reflection of other people than it is of me, because it required a community,” Johns said. “That award is nothing without the people [who] helped you get there.”