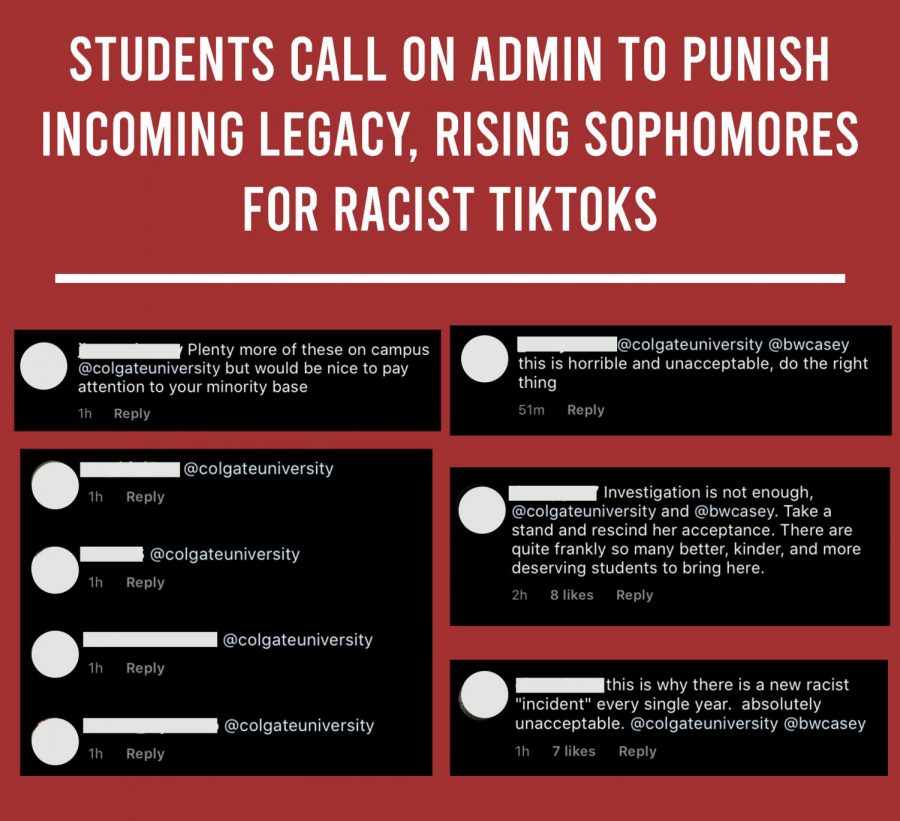 Update 6/23: The University has revoked the admission offer of the incoming 2024 student in the first racist TikTok and is currently investigating the TikTok involving current students, according to an email to the community from President Brian Casey Tuesday.

“I want to point out that the level of ignorance shown in these videos is appalling. In a time when we have seen people across the world rightfully outraged by the recent killings of George Floyd and countless other [Black] men and women and we see nearly every institution in the country looking at the nature and effect of systemic racism, these videos evince a level of cruelty that is staggering,” Casey wrote in the email.

Original story posted 6/22: Hundreds of Colgate students are calling on the administration to revoke the admission of a member of the incoming class of 2024 after a racist TikTok they* posted went viral on social media. A second racist TikTok made by two current Colgate students* surfaced later in the day and quickly circulated around the student body.

Hundreds of Instagram users tagged the University and President Brian Casey in comments on an Instagram post that shows a tweet and a video of the TikTok Monday, June 22. The comments express concern and call on the University to hold the incoming student accountable by revoking their admission. Some also questioned how Colgate admission practices would allow a student like this to be admitted. Junior Giovanni Vigilante tagged Colgate in his story including the TikTok and said, “THESE are the kind of people you accept?” with an emoji depicting a green, nauseated face.

The TikTok video shows the user Google searching “African Americans,” with a sound overlay “get in loser we’re going shopping,” playing while the screen shows the shopping tab of the search, perceived to be a joke about the selling of African-Americans during slavery. The user captioned the video, “it’s a joke please don’t come at me #jokinghazard #equality #littlethings.” The individual’s Tiktok and Instagram accounts have since been deleted, but the Tweet identifying them includes a recording of the video and remains circulating online. The user is listed in the Colgate directory and is a member of the Class of 2024 Facebook group. According to their Facebook account, the individual’s father and brother both graduated from Colgate.

Under Colgate’s Equity Grievance Policy (EGP), violations for harassment can occur on “communication-based” platforms, “such as phone calls, e-mails, text messages, chats, or blogs that offend, demean, or intimidate another on the basis of gender, race, color, religion, ethnicity, national origin, sexual orientation, gender identity or expression, age, or disability.” It’s unclear where posts directed at a racial group and not a specific individual fall under the EGP, or if this individual’s actions fall under the EGP guidelines.

Many individuals and student groups quickly organized efforts calling on the administration and Casey to revoke the student’s acceptance. The University’s official Instagram replied to many users who tagged them, saying, “We have shared the post with the appropriate departments on campus to conduct a review.” The University has yet to release an official statement. The Maroon-News has reached out to President Brian Casey and Jones and Wood Family Vice President for Admission and Financial Aid Gary Ross for comment.

Junior Sally McGee started a Change.org petition on Monday, June 22, calling for the revoke of the student’s admission, which gained over 900 signatures in its first hours online.

“As American citizens demand racial justice and the dismantlement of racist systems in education, health care, politics, government, and all other sectors of life, the undersigned demand that Colgate University continue its dedication to racial justice by revoking the acceptance of [the] incoming [first-year],” McGee wrote in the petition’s description. “[This individual] posted an incredibly racist video on TikTok that made light of slavery … In order for Colgate to maintain its stance against racism, the institution must hold this individual accountable.”

The initial tweet featuring the TikTok was posted late Sunday night with the caption: “Looks like a grade full of racists. [This student] is going to @colgateuniv in the fall.” The tweet refers to another racist video that recently surfaced featuring two other 2020 graduates of the same high school using racial slurs and joking about the murder of George Floyd. The school posted a statement responding to the offense, but has yet to respond to the TikTok involving the incoming Colgate student.

A second racist TikTok surfaced and circulated around the student body later on Monday, posted by a rising sophomore in December 2019. They and another student mimic an exchange between a college counselor and a Black student in which the student says the counselor is racist for saying they might not get into Yale with their 1.3 Grade Point Average (GPA). A third, Black student, then dances in the video, implying they were then admitted to Yale, perceivably mocking affirmative action. The Black student featured in the video was not aware of the context when they were filmed for the end of the video.

The Colgate Student Coalition (CSC) wrote and circulated a letter template late Monday, June 22, for students to email members of the administration regarding both TikToks, according to senior Melissa Verbeck. The letter was originally drafted by CSC media team member junior Keilani Blas and has since been developed by the media team and members representing various student organizations.

Noting that the incoming first-year student said the video was a joke in their caption, the letter says, “As if the hundreds of years Black bodies have faced in this country are funny to [them]. As if the r*pe, torture and starvation that enslaved African bodies endured on slave ships and stolen land, were entertainment to [them].”

The CSC’s email template also references the second video and the students’ deception of their Black classmate.

The Coalition templates have been circulating around the student body through GroupMe, social media pages and email. The Coalition’s Linktr.ee page with the templates had over 200 views within hours of its posting.

“All three of them posted these videos without regard to the millions of Black Americans who have been murdered by law enforcement, murdered by community members, murdered by those whose job it is to keep them safe. The individuals clearly ignore the fact that this country was founded on racist ideals and do not show any sort of understanding about how affirmative action really works,” the Coalition wrote in reference to both TikToks.

Many other campus organizations are writing to the administration denouncing the TikToks including Kappa Kappa Gamma, the Konosioni Senior Honor Society and Gamma Phi Beta.

Student Government Association (SGA) president senior Amarachi Iheanyichukwu responded to the first video in a statement to the Maroon-News:

“I, and the other members of the executive are disgusted by the emergence of this video and more so by the possibility of this student joining our community this fall. Shortly after the video was brought to my attention, I contacted Dean McLoughlin and two other members of the administration, stressing the importance of reevaluating the student’s place in the Colgate community. Dean McLoughlin informed me that Admissions and the Dean of the College will be meeting to discuss this student’s actions tomorrow. As an institution that strives to uphold principles of equal opportunity, inclusiveness, safety, and mutual respect, it is my hope that they will arrive at a decision which mirrors those they outline in their mission and inclusion policies,” Iheanyichukwu said.

Similar incidents to these have happened at other institutions. Over recent weeks, the College of Charleston in South Carolina and Marquette University in Wisconsin rescinded the admission of students for racist social media posts. The University of South Carolina and Wesleyan College recently expelled students for the same reason. In April, a Georgia high school expelled two students after their racist TikTok went viral.

*Editorial Note: We have decided to omit the names of individuals identified in the TikToks for their names’ lack of importance to this story, speed of publication and ethical considerations due to the individuals’ age. The names are readily available at many other platforms, many linked above, but do not serve any compelling purpose to be repeated in this story. Please contact us at [email protected] with any additional questions or comments about our decision.