Alumni Send Anti-Racism Letter with Demands to President Casey, Administration, Board of Trustees 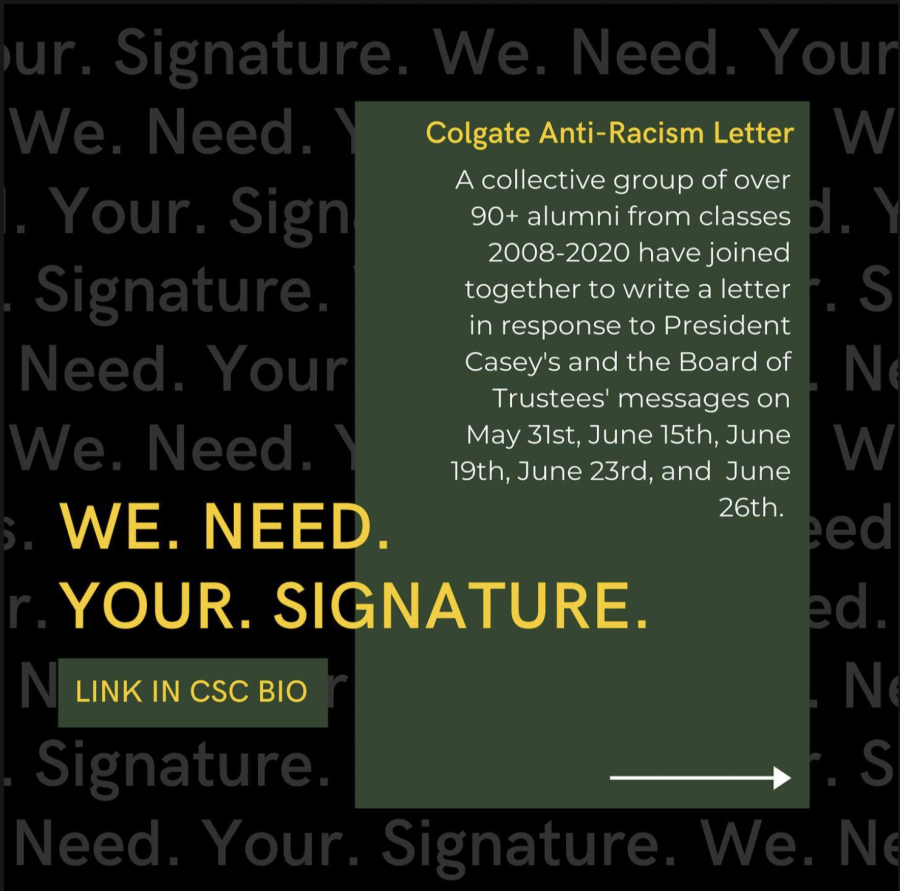 The Colgate Student Coalition (CSC) promoted the letter and its demands within the student body on their platforms, sharing the above graphic on their Instagram page.

Over 2,300 alumni, current students and community members signed an alumni written anti-racism letter to President Brian Casey, the administration, the Board of Trustees and Faculty responding to the University’s recent correspondence regarding racism at Colgate and beyond. The letter asks the University to participate more actively in anti-racist work and change “school culture at its core” to be more inclusive and equitable.

The letter, sent today, July 13, urges the administration to connect national confrontation of systemic racism to the Colgate community and create concrete and transparent systems of accountability.

“As our society and campus work to effectively fight two pandemics, we implore the University to consider not just the physical health of the students, but also the short and long-term social-emotional health and wellbeing of students in regards to addressing the ongoing battle of working to dismantle systemic racism,” the letter reads.

The letter asks specifically for three “shifts” in Colgate’s approach to antiracist work: that the University “officially include anti-racism as a core tenet in the University’s mission and maintain a zero tolerance policy for racism,” “prioritize DEI reforms concurrent with COVID-19 recovery efforts and create an Anti-Racism Accountability Board” and “decolonize campus spaces & honor [Black, Indiginous and People of Color] BIPOC individuals through increased recognition in building names and University projects.”

The first shift suggests that the University add a commitment to “anti-racism, diversity, equity, and inclusion” to its mission statement and further assert that the institution acts as an anti-racist system, allowing for anti-racist work to be a priority in all aspects of campus life.

“As one of the alumni who has been a part of this letter-writing initiative said, now is not a time to be asking for bread crumbs, we want the whole loaf, and in order to get the whole loaf, Colgate needs to fully integrate anti-bias anti-racist work into every facet of the campus community,” Colleen Schneider ’11, who worked on the letter drafting, said. “This is not work that should be siloed to an office of Diversity, Equity, and Inclusion [DEI], but needs to be at the forefront of decision makers’ minds every day, for every decision they make.”

Within the second suggested shift, the letter asserts the urgency and necessity of consistent anti-racism work, demanding it not be overlooked in the wake of the coronavirus pandemic and its financial implications. It also requests that Colgate reallocate funds from the budget of Campus Safety to DEI initiatives and alternate methods of safety on campus, and the formation of an “independent Anti-Racism Accountability Board,” that would include alumni, faculty, staff and students, to hold the University accountable.

The third shift asks the University to recognize and reconsider “the relationship between spatial and racial injustices.” Alumni acknowledge that Colgate rests on “the ancestral lands of the Oneida nation of the Haudenosaunee Confederacy,” applauds the University for renaming Cutten Complex to 113 Broad Street for its racist history and asks the University, and specifically the Colgate History Project, to continue to use Colgate’s physical campus to honor BIPOC community members.

The letter acknowledges Colgate’s DEI Plan released last fall, and notes that a Black alumna also criticized the University for their lack of urgency and priority in past DEI and anti-racism initiatives. Alumni further acknowledge that in times of crisis, such as the COVID-19 pandemic, it is most important to ensure anti-racist work is not forgotten.

“The consistent deferral of investment, effort, and attention to dismantling racism at Colgate is categorically unacceptable and must end,” the letter reads, demanding the University take a more direct stand denouncing racism at Colgate and acknowledge their inadequate responses to recent incidents of racism on campus.

Alumni also discuss the recent racist TikTok incident in the letter, saying they appreciate Casey’s message to the community on June 23 and the decision to revoke a students’ acceptance, but note the lack of full accountability from the Board of Trustees and administration.

“We have yet to see the administration or Board of Trustees denounce racism outright at Colgate or acknowledge their lack of comprehensive response to the numerous racist incidents that have occurred over the past few years (e.g. not releasing the findings of the investigation into the traumatic racial profiling of a Black student in spring 2017),” the letter reads.

Hannah Adkins ’20, who signed the letter, also commented on recent racist events in the community mentioning the TikTok incident and acknowledging that racism occurs on Colgate’s Campus every day, whether in the form of micro-aggressions or more “blatant” acts.

“In order to live up to our values I believe that we must re-educate whiteness while also prioritizing the voices of Black and Brown students and their needs,” Adkins said. “Calls to decolonize our spaces, incorporate anti-racist work into our curriculum, and centering DEI initiatives are tangible examples of how Colgate can confront its history with true accountability while also working to create a more empowering and critical educational experience for its students.”

The letter initially focused most heavily on demands unmet of the 2014 sit-in organized  by the Association of Critical Collegians, where hundreds of students occupied the Office of Admission protesting specific incidents of racism on Colgate’s campus and larger campus cultures that ignore minority student voices. In response, the University released a 21-point plan under a new initiative called ‘Colgate for All,’ each of which includes a status indicator of “complete.” In the current letter, alumni still ask that the website be updated and all the status denotations be reevaluated. In a Zoom meeting prior to the letter’s release, organizers commended the system of accountability established in the aims of the Colgate for All Initiative, noting contrast to the administration’s response to the 2017 Glue Gun Incident, which they noted was vague and inconsistent.

“I remember, as a student at Colgate, feeling like we were the first ones to ask the administration for something, but as I’ve seen events unfold at Colgate in the years since I have graduated, I have seen students asking again and again for the same things students were asking for when I was a student. I hope current students become more aware of how their time at Colgate is situated within a history that extends beyond their four years on campus and that this emboldens them to continue to keep Colgate accountable,” Schneider said.

Colgate Student Coalition (CSC) organizer and senior Melissa Verbeek said one of the best features of the letter is how actionable its demands are, also commenting on how the University has failed to address incidents of racism in the past.

“I hope that any response from President Casey and/or the Board of Trustees directly acknowledges every one of these demands, and actually outlines future tangible action; I tend to get frustrated after receiving general emails that have a tone of ‘we hear you,’ if they lack specifics regarding how Colgate will change to actually respond what students want and need to feel supported,” Verbeek said.

The letter drafting process initially included around 80 alumni in a Facebook group from class years spanning from 2008 to 2020. Though this Facebook group did the early organizing for the letter, the final draft included alumni spanning from the class of 1950 to 2020. In the drafting process, organizers also included current students to ensure the letter still speaks to the student population, working directly with CSC for collective editing and redrafting.

“Current students have a much better sense of the campus climate than alumni do, and alumni have the life experience, hindsight, and privileged position that they can leverage to help students create a campus community where more and more students feel welcomed, included, and safe enough to call Colgate home,” Schneider said.

Schneider said that as a white woman, her voice is not meant to be centered in the letter but is, in reality, more likely to be heard, making her somewhat of a begrudging spokesperson though the work and voice of the letter is entirely collective.

“As a white woman, I know that I risk much less than my BIPOC alumni colleagues, and I know that, unfortunately, my voice is more likely to be listened to,” Schneider said. “However, I want to make it very clear that the writing of this letter was a collaborative effort among Black alumni, Alumni of Color, and White alumni. My role in this process was no more important than any other person’s role. Our goal in this process was to center the voices and lived experiences of BIPOC alumni.”

Adkins said she signed the letter because she loves Colgate and wants to see positive change at the school.

“The anti-racism letter … is another example of inspiring, student-led activism that has propelled change on Colgate’s campus throughout its history. As someone who loves Colgate but also understands the pressing need for institutional change, I signed this letter in the hopes that the administration will begin to address the deeply entrenched racism and white supremacy on campus on a widespread, structural level,” Adkins said.

Verbeek echoed Adkins’ sentiment that it was inspiring to participate in the letter-drafting process.

“I really hope that this partnership between current students, community members, and alumni continues. It was incredible to read that there was a signatory from 1950, and the whole thing represents cross-generational desire for change,” Verbeek said. “[Alumni] are listened to when they are willing to write large checks to Colgate, I hope the University gives the same time and energy to this letter.”