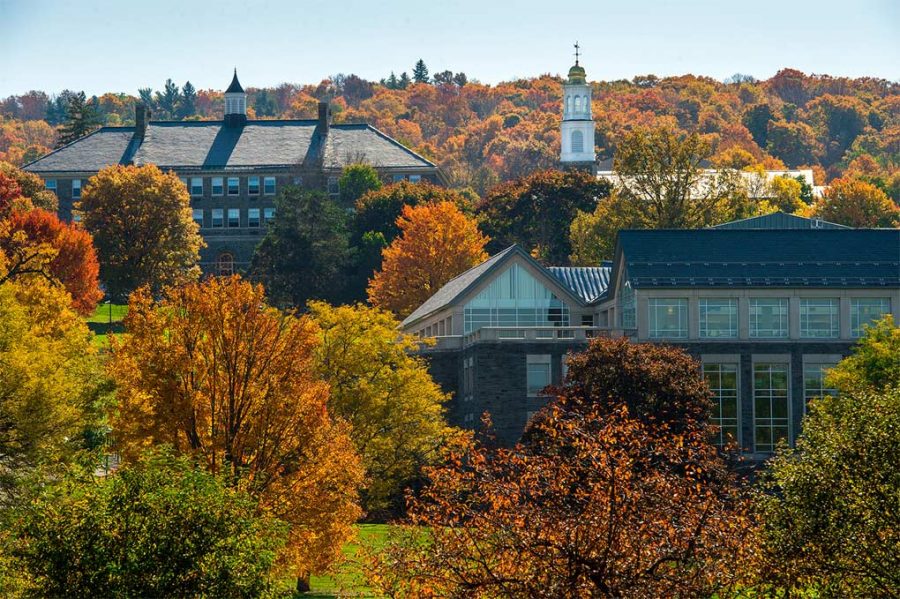 Town halls addressed the pressing questions of students, parents and Hamilton community members last week regarding Colgate’s plans for the reopening of campus to the full student body in August. Presenters announced during the events that over 90 percent of students plan to complete the fall semester on campus, an extension to the drop/add period for courses and the procurement of the Wendt University Inn as a quarantine space.

Before addressing questions with students and parents on Monday, July 6, President Brian Casey acknowledged the changing nature of the national situation, which the University is closely monitoring as coronavirus cases rise in nearly 40 states and New York continues to expand the list of states from which visitors need to quarantine upon entering. “Like all of you, we are following the news,” Casey said.

Top on the minds of many, the required 14-day quarantine for individuals entering New York from 22 states came after the task force report was finalized, according to co-chair and Professor of Biology Geoff Holm. Plans for the University’s implementation of the quarantines and how they may impact move-in timing are not fully developed, Holm told community members on Thursday, July 9.

Enforcement of the commitment to community health policies, which all students faculty and staff must sign to return and outlines guidelines for mask wearing, social distancing and gatherings, was among the central questions addressed at both forums. “We’re going to have to be firm, swift and tough,” Casey told community members. “I do believe [students] have learned the world has changed, and it’s going to become very apparent to them when they get onto this campus how different it is.”

Emphasizing the centrality of the commitment to the reopening plan and calling it a pledge he hopes to build into the campus culture through education and partnerships with student leaders, McLoughlin acknowledged that full enforcement of and punishment for noncompliance will be impossible. For serious violations, however, administration does plan to implore the Student Handbook, for which punishment can result in loss of campus housing and removal from campus.

Holm discussed the health strategy of the report, which includes testing prior to, upon and shortly after arrival, as well as regular surveillance testing of students, faculty and staff throughout the semester, daily symptom monitoring through a smartphone app and required face coverings. In response to concerns about accessing tests prior to arrival on campus amid shortages in some states, presenters said the University will work with students to procure tests should they not be able to access them at home. Holm assured community members that Colgate’s testing protocols on campus, which utilize an in-house diagnostic testing system the University purchased in partnership with a private company, will not tap into any of the village or Community Memorial’s testing capacity available to the public.

Holm said the University is also exploring wastewater testing, which could detect the virus in wastewater before an infected individual would show symptoms. According to Holm, the strategy aims to minimize the amount of close contact between individuals on campus that would prompt the need for one to quarantine. (Close contact is defined as being within six feet of someone for more than 15 minutes without a face mask.) The University procured the Wendt University Inn hotel in Hamilton as their primary quarantine space for those infected or exposed, but encourages students needing to isolate who live close to campus to return home to do so. Holm also addressed privacy concerns about the bluetooth tracking apps the University is exploring for contact tracing.

“We are trying to work with companies to identify an app that will alleviate many of those concerns but would still provide us with an advantage in being able to trace contacts and minimize the possibility of spread,” Holm said.

Dean of the Faculty Tracy Hucks overviewed the academic aspects of the plan to students and parents, and said 92 percent of students presently plan to return to campus for the fall. Faculty will decide similarly if they will return to in-person instruction or teach remotely, though some courses, because of their size, will be taught remotely in either case. Hucks also announced an earlier start date and the extension of the drop/add period beginning in mid-August, where students will know the mode of instruction for their courses and have an extended window to adjust their schedules.

McLoughlin addressed concerns about socializing and campus life, saying administration is exploring ways to recreate social connections and preserve important Colgate traditions, including convocation for the class of 2024 — though without specifics. “This is a new way of thinking about returning to campus this fall,” McLoughlin said.

Addressing questions from community members about students living off-campus, who do not fall under the rules of those in campus housing, presenters acknowledged the uncontrollability of those spaces, but urged landlords to specify restrictions on gatherings in their leases.

“We do understand that there are some vulnerabilities in [the plan],” McLoughlin said. “The plan that we recommended is not predicated on a 100 percent compliance with this. That is, we know that some people won’t wear a mask 100 percent of the time, we know that people won’t always stay six feet apart from one another.”

Presenters said the University will continue to support the Hamilton community and their schools in their reopening. McLoughlin and Holm said they plan to actively update the campus and Hamilton communities on case numbers, occupied quarantine space and other metrics throughout the semester.

“This plan relies on layer and layer of not just testing and tracing, [but] behavior and reiterating cultural expectations. I think it’s going to be a complex response, [but] I don’t think it’s a naive response,” Casey told community members. “We’re in partnership together — let’s learn how to do this together. We’re gonna need you to help us as much as we can help you.”

In order to officially reopen, the plans must be approved by the state of New York and Madison County must remain in phase four of reopening, the state mandate for in-person higher education. Plans must include a clear point at which the university would need to re-close mid-semester, which remains in development and must be approved alongside reopening procedures.