Essay: The Road Through Our Backyard 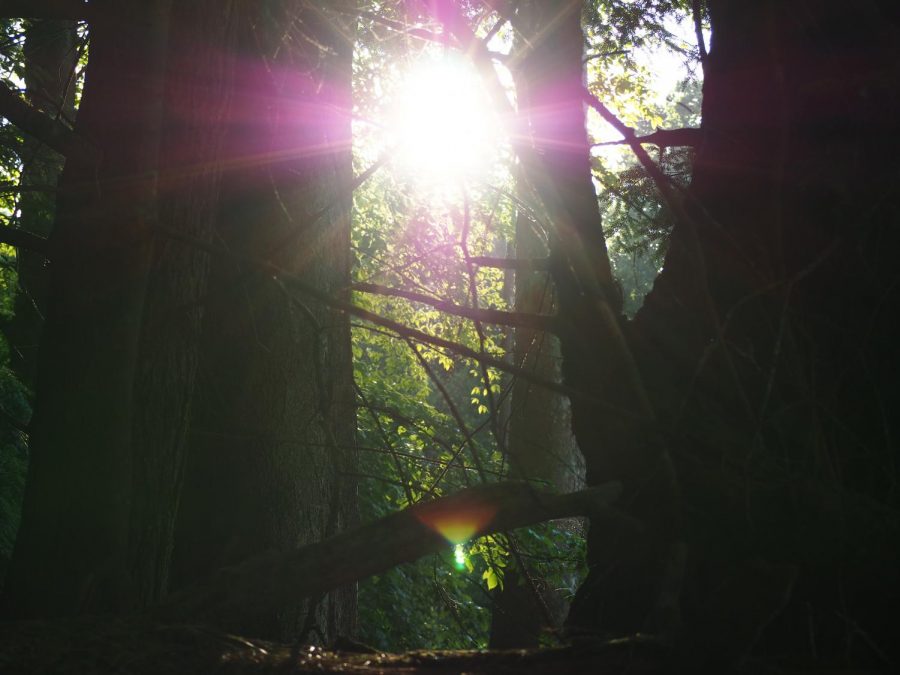 This article is the first part of an Arts & Features essay series by Magnus Vogel about his cross-country road trip.

The dashboard lights went off like sirens and in the blink of an eye we were consumed by showers deep in the heart of Hiawatha National forest. Before we had reached the Yooper, already a thousand miles from home, things were easy; I felt impenetrable as we began our trek around the United States, departing from our insular Bedford-Pound Ridge communities the road was — and still is — howling.

In the midst of quarantine, at the height of the pandemic, as the world clashed with fear, frustration and confusion, an idea blossomed into a wonderful opportunity. The plan seemed standard at first: a circumnavigation of the country in five to six weeks, riding through every national landmark, absorbing as much culture and experience as humanly possible given the time restrictions my mother had advised of us. We planned to mostly neglect the urban-intensive route in favor of the mountains and the overabundant fields of green that sweeped a spectrum of biological diversity stretching from coast to coast. We sought the forests, to disappear into the mountains — so I could find the boy I had left behind some years ago.

But still, we wanted to drive through some cities, to introduce ourselves to groups of people unknown to the lesser Westchester area, and to join the growing national fight for social justice. I was lost in a paradox of purpose and confusion, every turn away from home I found myself astray, and every step away I felt more at home.

This was my escape plan, my life crash-course to make up for the years of school I have  disregarded, a chance to discover who I am and why I am here.

What started as a simply planned “southern loop” route actually got flipped on its head the day we were supposed to leave, a choice I still do not regret, even as the dashboard screamed of commotion and conundrums; rainfall washing down our windshield reminded me more of a waterfall next to our first campsite in Upstate’s Watkins Glen state park.

“What do we do?” Rory asked through his giddy smile — eyes open, excited — exploding. “Keep driving,” I said with uncertainty, foolishly believing the dashboard was putting on more of a Cirque du Soleil display as opposed to actually expressing a message of importance to its physical counterparts.

Rory is one of my best friends in this world — even more so he is a brother, one of two. Rory is driven, a powerfully-spoken passionate individual, but beyond his tenacity for life he is one of the most loving and gracious people I’ve ever known. Additionally having trekked throughout South America during his gap year, there are not many other people I would have considered taking this journey with.

As we approached dusk and entered the park, my mind began dancing to the sound of opportunity that lay before us. Local birds, the voyage of water and wind compose the natural symphony around us; it is the song of life, although heard differently by varying ears, the one we all dance to. Even though we had not yet fully retreated from society into the wild, the infrequent passing of nearby cars is a reassuring noise I now cherish, like the symphony I so strongly desire.

When we cross state lines it’s exciting, it feels oddly personal; you watch your natural surroundings transform before you and it’s as if the world is evolving beneath your toes. Entering Pennsylvania felt like we had entered a national forest, and the roads weaved throughout the trees as if they had been paved by the sunlight shining through the canopy. Little Pine is a small state park just outside of Cherry Springs, our original campground known for its stargazing, so we assumed the stars in Little Pine would be on a similar level. In actuality our shining moon was so full it assumed control of the sky in a matter of mere moments, there were no stars. It was spectacular. The stars, I think we knew all along, were not what we were searching for; isolation, solitude, complete submersion, the howl of the wild.

Shining bright, Cleveland is my diamond in the rough. We didn’t see much in Ohio, but Cleveland stuck out like a newly-born thumb. A monumental city, I see it, Cleveland is structurally gorgeous; but magnificent architecture, infrastructure, ample recreation and green space draw an illusive veil. Cleveland was ravaged by COVID-19 and runs rampant with poverty, only to be exacerbated by our historic processes of systemic racism, further intensified by recent acts of police violence.

The morning we set out to leave, I went to pick up breakfast from a nearby deli when a woman stopped me outside. She was wearing a navy t-shirt, blue Champion shorts with empty pockets and matching Crocs. Her hair was frizzy, her lips were dry and her voice had a slight croak to it — I wish I remembered her name, I wonder if she remembers mine. She told me she lost her job when the pandemic reached Cleveland, and now she was homeless with her girlfriend and her son. She asked for a drink, some chicken wings for her and her son and bus fare to get back to her neighborhood. I couldn’t help thinking that this woman and I had been drawn to one another by some kind of greater force, nor could I help but believe that my subconscious had falsely created an idea out of nothing. “God bless you,” I said as she walked out, I hope I did some good.

I remember looking up through the sunroof when the rain really started to fall, looking for some kind of certainty, the Thule was exactly where it was the morning we left Bedford. I stuck my head out the window.

We decided to drive as deep into Michigan as we could muster with the daylight ahead of us, a worthwhile decision it was. We had driven just over 10 hours that day, swapping driver and passenger just twice, when we entered Hoeft State Park on the edge of Lake Huron. Even though that night Huron’s waves were complimented by the occasional whoosh of a motor vehicle, we were alone in a full world. I awoke with an exhilarating burst as the waves crashed on the Huron shore, it was only us and the sun that morning. Despite our limited companionship thus far, I have never felt more at home — in the world and in myself.

The Painted Lady Cafe of Rogers City was about 10 minutes south of the previous night’s campsite, the cafe advertised itself as a boutique in addition to its food and beverages, we were sold from the Google search. The Painted Lady is filled floor to ceiling with just about everything you might dream of, edible as well as not, and gifts for anyone you could ever love. Paul’s mustache hung over his mask the way friends’ arms hang over your shoulders, his eyes were equally as welcoming. He was short and skinny, with hair on his head just a bit longer than that of his face. He referred to the cafe as “more of a hobby than a real job,” but he bounced around and spoke to us with a passion that seemed to say otherwise. We told him about our plans for the trip, he asked us about the ones we had for life. You could tell he was brilliant, passionate and clearly loving. “Don’t grow up all the way, or you’ll lose all the fun,” he told us before we left, as if he knew it’s what I was waiting to hear.

The kid in me wanted to keep going, desired it, craved it, but our judgement told us both that the car needed a professional evaluation. Rory and I had planned on spending at least one night camping in Hiawatha before we were to embark on a few day venture to Isle Royale. We failed to successfully reserve seats for the seaplane we needed to get to the island, and in addition to our newly introduced car troubles, the plan appeared out of reach. So we headed to the Pictured Rocks Inn of Munising, the closest town to our current location and the only motel with vacancy. The Upper Peninsula brought us nothing less than kindness and generosity from everyone we met. Sonya worked the front desk at Pictured Rocks, clearly overworked by July fourth crowds, only wanting a cigarette break, she spoke cheerfully and was intrigued that our journey managed to find a spot at her house of employment. Sam accidentally woke us the following morning, considerately reminding us that motels have check-out times too and that she would get us extra time to wake up. But the real hero of the day was a man named Tom, a mechanic at Nelson’s Service Center in Munising. Tom didn’t talk much, but that’s to be explained by the work he does. His eyes display his thinking like a drive-in movie; he’s smart, soft-spoken and confident. After his evaluation so was I. The damage was minor but still critical, so he pointed us in the direction of some Subaru dealers that would be able to help. There is no such thing as a conflict too big to conquer, as Tom pointed out, it takes determination and trust, both in yourself and of those around you.

A home cooked meal truly is the best thing in the world to be away from and return to, there are things surely satisfactory and certain that our favorite meals provide, home being one of them. We spent four nights in Minnesota in the homes of friends and family, the perfect amount of time to recharge and launch forward with powerful strides of ambition and excitement. We took full advantage of the Lake Minnetonka waters, just outside of Minneapolis, as well as the neighborhood’s trail system, where we had graciously been hosted by newfound family and lifelong support. In the great northern woods of Two Harbors we sat atop the shore of Lake Superior, occasionally soaring into water that shocked your body alive at its sitting temperature. Below the cliffs of some thousand, perhaps hundreds of thousands of years old rock, below my friend’s cabin, below the sun and the sky and everything else above, I learned I am a man of the earth driven with a spirit of youth — howling for the road, calling for the wild.