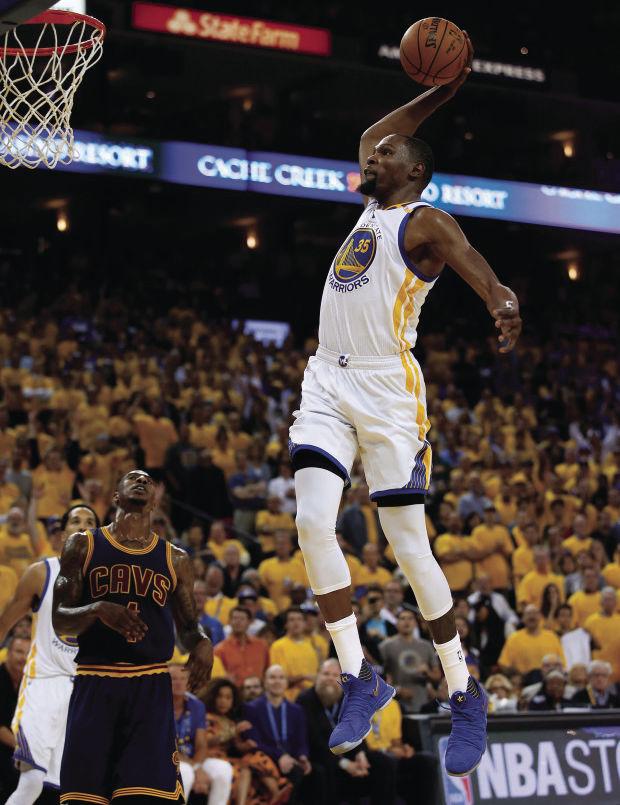 Kevin Durant has carried the Golden State Warriors in the first round of the 2018 NBA Playoffs with his all-star teammate Stephen Curry on the sidelines. The Warriors are looking to get back to the Finals for the fourth straight year.

With the curtain closing on a long and unpredictable regular season, the 2018 NBA playoffs are poised to be one of the most competitive postseasons in recent history. There are no clear favorites in either the Eastern or Western Conference, unlike the last three seasons in which the Warriors and Cavs breezed through their respective conferences to meet in the Finals. These playoffs will be different though, as I predict the Golden State Warriors will defeat the Philadelphia 76ers in a five-game series to win their third championship trophy in four years.

The Eastern Conference been dominated by LeBron James since he entered the league. He has appeared in the Finals in seven straight seasons, but I predict that streak will end with the 76ers emerging out of the East.

Philadelphia entered the playoffs with a 16-game win streak, which stands as the longest streak in NBA history to close out a regular season. In the first round, the 76ers will make quick work defeating the Miami Heat.

In the Eastern Conference Semi-Finals, the Sixers will likely face the Celtics who will have to fight through the playoffs without Kyrie Irving. The Celtics play great defense, but struggle to find a spark offensively. I predict they will fall to the 76ers.

In the Eastern Conference Finals, Ben Simmons and Joel Embiid will carry their team past the number one seed Toronto Raptors to reach the team’s first finals since the 2000-2001 season.

Before the season began, many believed the Warriors would dominate the Western Conference and coast through the playoffs like in seasons past. There was no reason to doubt the Warriors, as they retained their dynastic core of Steph Curry, Kevin Durant, Klay Thompson and Draymond Green. As the Warriors enter the playoffs without Curry for the first round, doubters are growing louder. Even without Steph, though, the Warriors will easily take care of a banged-up Spurs team.

The Warriors will likely play the Portland Trailblazers in the Western Conference Semi-Finals, a team that Golden State has only beat once during the regular season. With Steph likely back in the line up, the offensive firepower of the Warriors will prove too much for Portland. The Warriors’ real test will come against James Harden and the Rockets in the Western Conference Finals. I predict this to be a hard-fought, seven game series between the two best offenses in basketball. After the Warriors defeat the Rockets, their matchup against the 76ers will seem like a walk in the park.

Less than four years ago, the Warriors were seen as the new kids on the block. Since then, they have transformed the NBA with up-tempo play and an emphasis on the 3-pt shot. Fast forward and the Warriors are now the “villains,” and the 76ers are the young team primed to shake up the league.

Here’s how each of these teams will make it to the Finals:

The Golden State Warriors are the second seed in the Western Conference and have an easier path than the Houston Rockets. In the first round they are matched up against the San Antonio Spurs­ – an old team missing its best player in Kawhi Leonard. The Warriors will likely sweep the series.

In the second round, they will face either the Portland Trail Blazers or the New Orleans Pelicans. Both of these teams lack depth, and with the return of Curry, the Warriors should have no problem handling either team.

It will be a Warriors-Rockets Western Conference Final, and the experienced

Warriors will pull it out in a series that will go

On the other side of the league, the 76ers will emerge from a relatively even Eastern Conference. The 76ers’ first-round matchup is the Miami Heat.

The Heat’s defense will keep the games close, but their anemic offense will leave them short of victory – I predict the 76ers move on in five. In the second-round, Philadelphia will likely play the Boston Celtics.

While the Celtics have proven they can win without Kyrie Irving, the high-octane 76ers led by soon-to-be Rookie of the Year Ben Simmons will be too much to handle. In the Eastern Conference Final, the 76ers will face either the Cleveland Cavaliers or Toronto Raptors.

In either case the teams are evenly matched, but Philly will come out on top bolstered by the momentum of a city that has dominated sports in 2018.

For a team that went 10-72 just two seasons ago, making the NBA finals will be a huge accomplishment for the Philadelphia 76ers. However, they will fall short to the Golden State Warriors who will cement this team’s dynasty with their third championship in four years.

As the regular season came to a close, NBA fans were faced with something we were not used to: different names atop both the Eastern and Western conference standings. It would not be a stretch to say this question may not have even been published the last few year because the answer was too agreed upon: the Cleveland Cavaliers and the Golden State Warriors were shoe-ins for the Finals game, having faced off three years

in a row. But not this season. This may be the first year since the first iPad was released that LeBron James might not be playing through mid-June. That’s scary. His Cleveland Cavaliers have been up and down this season and experienced a major roster overhaul at the trade deadline. Then again, who am I to pick against the best player in the world in the most important stretch of one of his most impressive seasons of his career?

So, although it may seem to be a cop out answer with stronger threats within the East than ever, my choice to represent the East in the Finals is the

My main reasoning for this is the extraordinary high expectations I hold playoff LeBron to, and he has proven the capability to carry his team through the Eastern side of the playoffs in the past.

The Western conference was expected to be tougher competition since the summer when multiple all-stars moved from the East to the West, and has fully lived up to those expectations.

We saw how close the competition is in Game 1 between the one-seed Houston Rockets and eight-seed Minnesota Timberwolves, a three point game that came down to the final seconds. The Rockets have looked unstoppable all season as they steamrolled to 65 wins in the regular season. Mike D’Antoni, the offensive mastermind who focuses on an up-tempo, guard-centric and 3-point slingng offense, has the most talented backcourt in the league.

Though I praise Houston, I still predict the Golden State Warriors to reach the NBA Finals. Assuming Steph Curry comes back anywhere near 100 percent, the Warriors are the most talented team in the league.  A talented roster led by a head coach who has led through the two month grind that is the NBA playoffs multiple times already.

Yes, after all of this writing my prediction is still Cleveland vs. Golden State. Sorry for wasting your time with background noise, get ready for round 4!