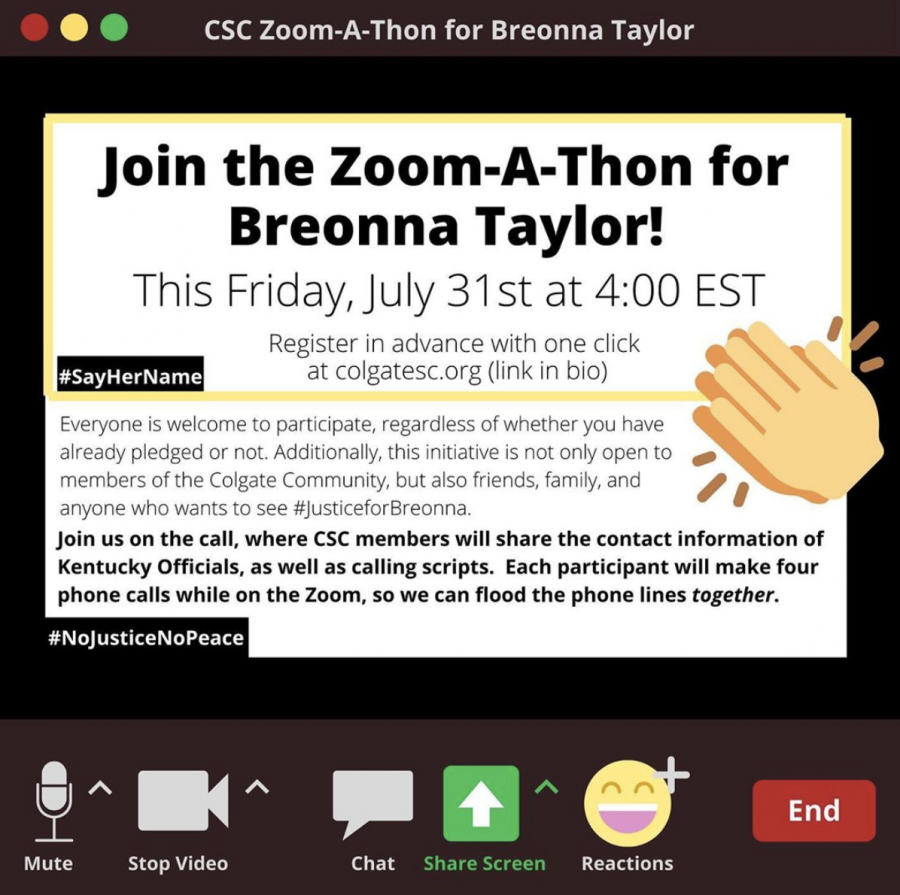 Over 70 students, alumni and members of the Colgate community called Kentucky officials to demand justice for Breonna Taylor during the Colgate Student Coalition’s (CSC) live Zoom-a-thon event on Friday, July 31, as part of the CSC’s ongoing efforts in support of Taylor and the #SayHerName campaign.

The Zoom-a-thon began with an introduction and instructions and allotted time for each registrant to make four calls to Kentucky officials to demand justice for Breonna Taylor. CSC members Junior Eliza Leal and senior Haley Taylor used a virtual phone-banking structure for the event, a strategy that has gained popularity among political campaigns in response to social distancing guidelines.

The initiative comes as activists worldwide call attention to the killing of Breonna Taylor by Louisville Metro police, who fatally shot the 26-year-old EMT in her own home in Louisville, Ky. on March 13, 2020. Police entered Taylor’s home with a no-knock warrant, which authorizes law enforcement officials to enter private properties without announcing their presence or identifying themselves. Since Taylor’s murder, NPR reported that no-knock warrants have been banned in Louisville.

The Zoom-a-thon evolved from the CSC’s pledge campaign for Breonna Taylor calling on members of the Colgate community to sign the pledge to email or call Kentucky officials with the initiative of getting 2,994 pledges in four days—2,994 pledges to represent the population of the student body, and four days to represent the number of months since Taylor’s murder. The pledge, which failed to meet its original goal, is still available to sign through the CSC website.

Although success was initially defined as amassing 2,994 pledges in four days, junior and CSC member Jessica Johnson explained that the true goal of the initiative is more profound.

“This initiative is about more than putting three disgusting men behind bars; this is about setting a precedent that Black women matter,” Johnson said. “I got involved with this initiative because, as a Black woman, I see Breonna Taylor in myself. Black people are conditioned to overlook hate crimes, racial prejudice, and social inequalities, because they occur every day, every minute.”

Protestors and online activists have called for the three police officers involved in Taylor’s death to be fired and arrested for murder. The New York Times reported that the detective on the case, Brett Hankison, has been fired and the two other officers involved, Jon Mattingly and Myles Cosgrove, have been placed on administrative reassignment. None of the officers have been arrested or charged.

The lack of action has enraged Black Lives Matter activists, who have understood this incident as an example of the violent combination of undervaluing Black women and police brutality. Junior and CSC member Keilani Blas echoed these sentiments, sharing the importance of Black women in her upbringing.

“I grew up in a predominantly Black community in metro Atlanta and I have benefitted a lot from the care and love in that community of Black women. I’ve seen so many Black women be undermined or killed and nothing happens,” Blas said.

Blas sparked this initiative by sending a message into the Colgate Student Coalition GroupMe.

“George Floyd’s murderer was arrested and getting charged, but nothing happened for Breonna Taylor and her name is no longer trending on Twitter, so I thought to myself ‘we need to do something,’” Blas said.

Many other CSC members agreed, such as senior Karina Cheah who described the moral obligation she felt to help organize this initiative.

“It’s important to me because it’s not only a question of justice, but of humanity. To allow this much time to go by without action to bring her killers to justice even though Breonna’s Law (banning no-knock search warrants) has been passed in her name is shameful,” Cheah said.

Editorial Note: The Colgate Maroon-News is a partner of the Colgate Student Coalition.