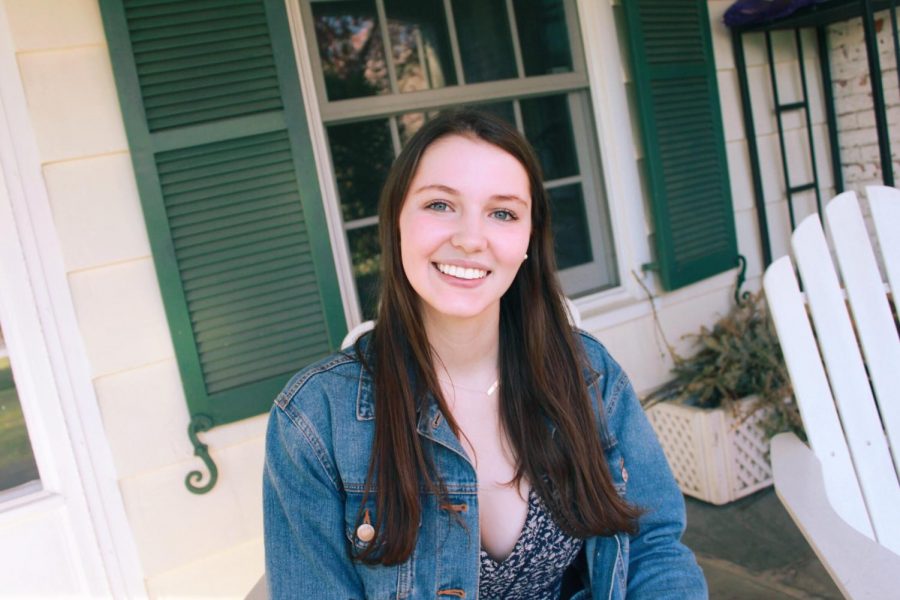 Estelle Kelty, a rising senior, hails from Bronxville, New York. She is a biology concentrator and a sociology minor. She is a renowned leader on campus, involved in a myriad of positions – ranging from Link Staff to the president of Gamma Phi Beta to a member of Konosioni. Among all these important roles, what really stands out about Kelty is her commitment to service in fighting issues of sexual assault and domestic violence both on and off campus.

First and foremost, Kelty is an ambassador to Haven, Colgate’s sexual violence response center that provides confidential care, support, advocacy and trauma-informed clinical services for survivors of sexual assault, intimate partner violence, child/family abuse, stalking and/or harassment. As an ambassador, Kelty serves as the connection between survivors and support resources. In her role, Kelty has gone on to work on the development and implementation of a project focused on the SANE, Sexual Assault Nurse Examiner, exam program which offers critical medical services to those who have experienced sexual trauma.

“What I think is so important about these programs is the fact that the nurses are specifically trained to be trauma-informed, which is critical in preventing the re-traumatizing of sexual assault victims,” Kelty said.

She admires the ways in which these nurses have dedicated their lives to providing compassionate care for survivors. Her project will seek to increase the accessibility and general knowledge about the functionality of these exams on Colgate’s campus in hopes of encouraging students to partake if they find themselves the victim of an assault. At the very least, she hopes to destigmatize the fear and uncertainty surrounding the exam, which typically consists of a physical exam to obtain DNA and other legal evidence, verbal and photographic documentation of a survivor’s story and the prescription of preventative medication for STDs and/or pregnancy.

Kelty’s passion for this project is infectious and it is not hard to feel the weight the work she advocates for carries.

“The unfortunate reality is that sexual assault occurs, both on our campus and on college campuses across the nation. I am trying to do my part to stop that and support our survivors as best we can because they deserve to be believed and treated with compassionate care,” she reflected.

Kelty’s role in combating issues of sexual and domestic violence does not end with Colgate’s campus and community. She also volunteers off campus on the Help Restore Hope domestic violence hotline. This hotline serves both Madison and Chenango counties by offering support, information and services to victims of domestic violence, sexual assault, child abuse and dating violence. She initially got involved in January of 2019, undergoing a week long training program through the COVE. Generally, Help Restore Hope seeks to offer free and confidential services to all survivors regardless of if their assault has been reported or when it occurred. In her role, Kelty supports and assists callers by referring services, providing information regarding local resources or lending a listening and empathetic ear.

In the face of COVID-19, Kelty enthusiastically found a bright side and remarked, “While I have not been able to take as many shifts as I would have liked to with other on-campus commitments, I am hoping to take on more shifts now that I am home for the summer months!”

This work is not without challenges. Kelty noted the struggles of being involved in work where you are repeatedly exposed to instances of humanity at its worst. She is bombarded with real life embodiments that correlate to the staggering statistics on the prevalence of sexual assault and domestic violence nationwide. The work can often be burdensome to the point that it becomes a type of secondary trauma. It is in this struggle that Kelty finds so much of the reward, in that these difficulties allow her to reflect on the deeply rooted relevance these interactions have to our very own community.

“Every survivor deserves to be believed, supported and cared for, and if I can offer empathetic support in any way, I feel it is my responsibility as a person in our current society to do so. People, not so different from our recent speaker on campus [Heather MacDonald], continue to blame survivors for the trauma they have experienced. They don’t believe survivors, shame them and re-traumatize individuals with their lack of understanding,” Kelty said.

Kelty is dedicated to leading the charge to incite genuine change on campus. In the news, there have been many reports of rising incidences of domestic violence in the face of COVID-19. Kelty laments this trend, but is not surprised. Luckily, shelters in New York are considered essential and remain open. Nonetheless, assistance is largely turning towards virtual and hotline related phone services.

Kelty looks to continue to do her part in serving the community.

“Since I am now home, my ability to keep working on campus has been slightly limited, but I am definitely still trying to be as involved as possible. I can still volunteer on the hotline and hope to pick up more shifts than I typically have the time to take on,” she said.