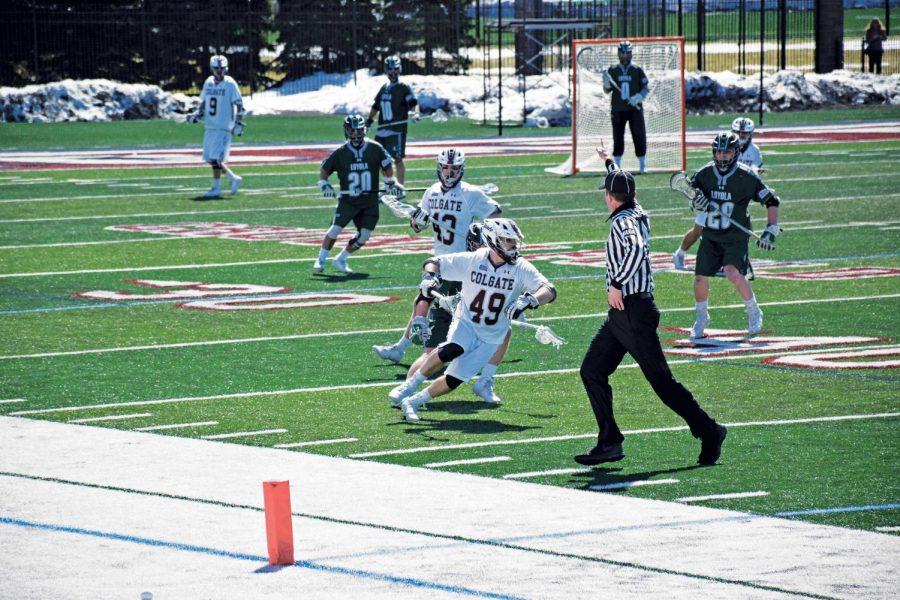 The Loyola Maryland Greyhounds defeated Colgate 11-7 last weekend. Despite a two goal contribution from Sam Cleveland and 17 faceoff wins by Colin Orr, the Raiders were unable to recover from a season high of 19 turnovers.

The Colgate men’s lacrosse team faced No. 11-ranked Loyola on Saturday, which proved to be a tough Patriot League matchup and resulted in the men being defeated 11-7. Despite the loss, the Raiders played a tough game, battling the Greyhounds from the first whistle.

Colgate’s offense struggled to take care of possession, yielding 19 turnovers throughout the game, a disappointing season-high for the team.

“Loyola is a very talented team, but we really beat ourselves. You can’t have as many missed opportunities, turnovers and mental mistakes as we did and expect to beat a team of their caliber,” sophomore long stick midfielder Parker Baddley said about the game.

Loyola entered Saturday’s game ranked second in the country in caused turnovers per game at 10.63, and they were responsible for 11 of Colgate’s turnovers.

“We knew going in that they were a team that like to start fast. They are a very good caused-turnover team, and we had 12 turnovers in the first half. Give them all the credit, but it never allowed us to play offense the way that we wanted. We were very tentative offensively because we were thinking about trail-checks. And when thinking about it, you start to slow down. They took full advantage of our inability to play offense the way we are capable of playing,” head coach Mike Murphy said about Loyola’s defense.

The Raiders showed persistence and determination throughout the entire game, regardless of the score. Sophomore midfielder Griffin Brown had yet another great game, notching his 25th goal of the season early in the second quarter. Notably, senior faceoff player Collin Orr earned his first goal of his career bringing the score to 2-5. Orr had 17 faceoff wins out of the 22 attempted, increasing his rate to .636. The Raiders went down 7-2, but junior attacker Sam Cleveland scored back-to-back goals to bring them back into the game. Cleveland also recorded two assists for the Raiders, which puts him at second on the team with 28 points, with seven goals and 21 assists. Senior attacker Chase Wittich scored once for the Raiders and first-year attacker Mike Hawkins put in two goals to finish out the offensive scoring for the day. On the defensive end, junior goalkeeper Connor Mullen had a career-high of 14 saves, which increased his save percentage to the .500 mark.

“The guys really did give it their all, it wasn’t about effort, we just didn’t execute our game plan and play complimentary lacrosse. Our defense played great, but our offense was just off. We are going to learn from it and we are on to Navy,” Wittich said.

“We came out with a good game plan and hit the field with a lot of energy, but we weren’t able to stop their attack long enough for our offense to get going. The faceoff unit played well and we got the goalie play we needed, in the end we didn’t execute well enough to win against a skilled team like Loyola,” sophomore defender Jack Donaghue said.

Colgate will face the Navy Midshipmen on Saturday, April 7 at 5:30 p.m. The game will be broadcasted on CBS Sports Network.