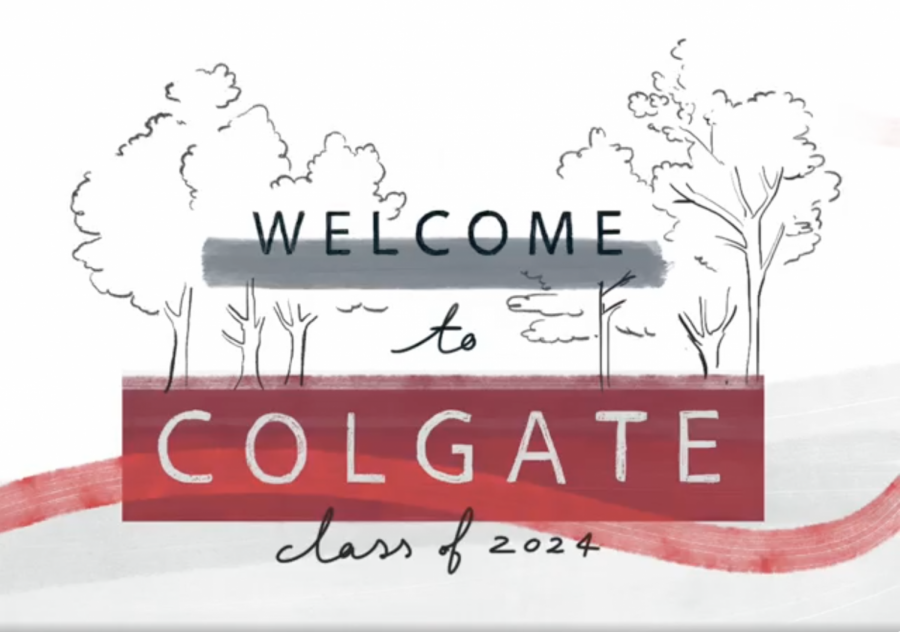 Having been raised on headlines of school shootings and partisan tensions, the class of 2024 harbors anxiety like none other. Now, that anxiety is compounded further by COVID-19. As faculty and upperclassmen  return to campus, first-year students are navigating their way through a plethora of emails, virtual orientations and Q&A sessions, all purposed to facilitate an easy transition into the Colgate community. The efforts to pacify apprehensions, however, have not been not universally accepted.

“They’re going to need to teach us how it’s supposed to go because we don’t know when this is going to end, but we have to try to live as normally as possible,” first-year Felicity Breedlove, from Grantham, N.H., said. “We don’t know what the norm is. I guess they are going to try to teach us the new norm, which I think will be really interesting because if there’s ever a vaccine or anything, they’re going to have to reteach, ‘This is what Colgate actually is.’”

The Colgate environment that upperclassmen and faculty are used to looks very different than the one first-years are preparing to greet. One event that will be drastically different for first-years this fall is move-in day. The Task Force on Reopening’s protocols to protect students, families and staff—such as disallowance of families helping their students move into residence halls—devastate those looking forward to the traditional first day on campus.

“It’s a pretty big part of American culture: the big move-in day, right? You get to do the movie scene of everyone carrying everything in and then the tearful goodbyes and then that’s when the ruckus starts,” Breedlove said.

Other first-year students found solace in the resources provided by the administration. Traveling from Russia, first-year Kirill Cherniakov has endured an arduous journey but was reassured by Colgate’s communication about new protocols.

“Even though most of the states are failing terribly with COVID handling, I feel really comfortable coming to Colgate. The administration made sure that we know every little step they’re taking to ensure our safety,” Cherniakov said.

While Cherniakov and Breedlove pack both their apprehensions and their trust in bags from home, other first-years have already experienced Colgate’s handling of the pandemic. The Office of Undergraduate Studies (OUS) program welcomed a select group of students to campus in June to get a glimpse of the academics at Colgate, but most arrived on campus with anxiety.

“We are all pretty anxious. When we found out and realized that there was COVID in town, we all just wanted to go home, but I guess now we know that we are being safe and we really don’t have to worry about it if we are being safe. At first it was like, ‘Oh we can’t do this,’ but then we realized it was not going to be better if we do it at home with all the distractions and stuff,” first-year and OUS participant Juan Gomez said.

Gomez is one of many first-year students grieving missed opportunities from their senior year: schools held graduations via Zoom, local legislatures canceled sports seasons, airlines grounded international flights. For many, four years of hard work felt meaningless. Locally broadcasted messages of congratulations could not replace the caps lifted into the sky, the cheers of proud parents and the smiles of accomplished graduates.

“In April I was supposed to go to the [Winterguard] World Championships. I was supposed to perform in the World Class Finals and that was a once-in-a-lifetime opportunity, especially with my friends, and I’ll never be able to do it with the same group of people,” Gomez said. “That was the biggest thing that affects me everyday. I think about it everyday.”

Gomez’s loss of the Winterguard World Championships parallels the loss felt by first-year Labib Mamun, who missed out on highly anticipated events at his high school, despite their hometowns of Lamont, Calif. and Atlanta, Ga. being separated by more than 2,000 miles. First-years’ differences are quelled by the communal efforts to sustain optimism in the mine-field of 2020.

“For starters, I had a drive through ‘diploma ceremony.’ They saved graduation for a later date and when that happened I had already moved in for the OUS summer institute, so I just feel like I missed that completely. Among other things, I also missed prom and missed the chance to watch soccer and lacrosse seasons at my high school,” Mamun said.

Whether it was senior prom, spring break or spring sports, the Class of 2024 learned to forfeit tradition through unexpected loss. The loss however, inarguably armors first-years with a distinct resilience.

“I feel like in the future we will definitely try to make up for everything that we’ve missed out on, so I am pretty sure in the coming years we will have a lot more fun than the past years and be more grateful for the time that we have here,” Gomez said.

Gomez is proof that despite the distressing losses of milestones and rights of passage, first-years at Colgate will come to campus kindling a genesis of hope. As much as the stay-at-home orders isolated members of the community across the globe, the struggle unites students and faculty like never before. Breedlove believes that the potential fruition of such hope is contingent upon how Colgate manages its communication.

“I just don’t get all [the] rules. I’m sure I’ll figure it out by trial by error or by email eventually, but I don’t feel like I know what I’m getting into,” Breedlove said.

Clarity teeters between unanswered questions and unanswerable questions as the course of the pandemic renders unpredictability in almost every aspect of a functioning society. First-years are not alone in their unease as move-in day approaches, for the absence of solutions is omnipresent throughout campus, Madison County, New York, the United States and the world. Amid the anxiety of the Class of 2024, there lies the remains of unfulfilled high school memories, of blind trust in the university and a sensitivity that comes with readjustment. Amid the hopefulness of the Class of 2024, there rests faith that Colgate will cultivate the unyielding spirit of its students.