Students Concerned Over Mental and Physical Health During Mandatory Quarantine 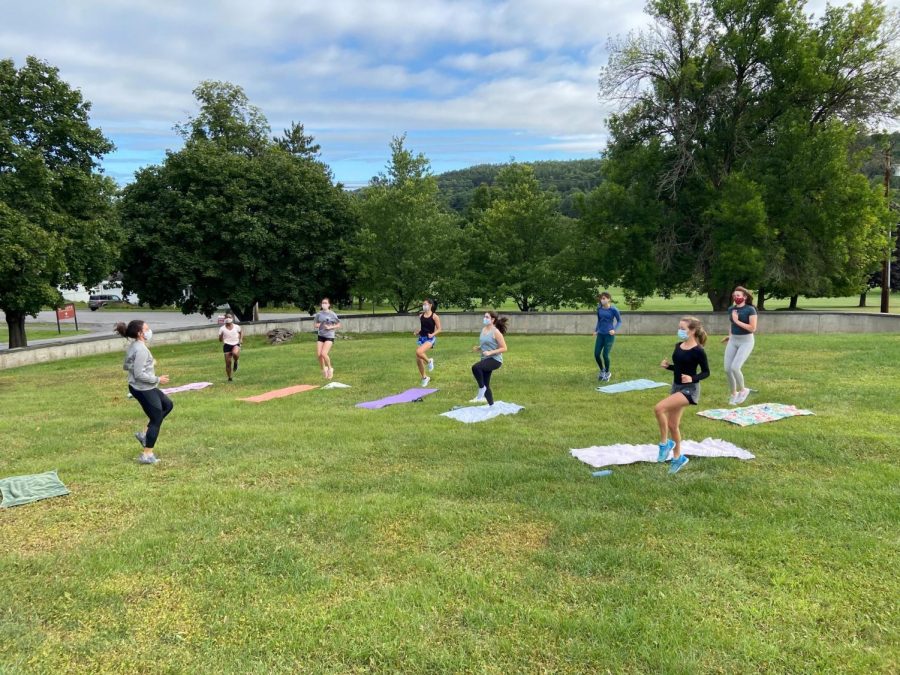 According to a campus-wide email sent by President Brian Casey and Vice President and Dean of the College Paul McLoughlin on Wednesday, July 29, all students are required to remain in their residences for a mandatory two-week quarantine period upon arrival to campus, ending on Tuesday, Sept. 8. During this period, students are not allowed to leave individual residences beyond scheduled and supervised outdoor physical activity twice a day, according to guidelines posted on the University’s website.

Outdoor activity takes place twice a day from 9-11 a.m. and from 2:30-4:30 p.m. in designated areas determined by residence hall location, beginning on Tuesday, Aug. 25 for first-year and second year students and on Thursday, Aug. 27 for upperclassmen. The Department of Health requires that outdoor time is supervised by University staff, and that students do not gather in groups, maintain a physical distance of at least six feet and wear a face mask.

Many students questioned what exactly supervised outdoor time will entail, and how they will cope during quarantine. First-year Andrew Weinstein expresses concern for fellow incoming first-year students, as many will be spending the two-week quarantine period with roommates they have never met before.

“I feel like meeting people online won’t have the same effect as meeting in person, and staying indoors for this long with someone I don’t know is going to be tedious,” Weinstein said.

“We know it is going to be hard and we know that there will be issues that arise, and the communication piece is really important,” Holm said.

Holm said the biggest issue returning students will face is recognizing that the campus environment will be different.

“We are not living in a situation where we can have the social interactions that we are used to having,” Holm said.

Casey expressed concern about the village in regards to the new influx of students to campus.

“Since March, there’s been no one here and, now, all of a sudden, students are back and that’s going to be a very hard thing for the village to get used to, so I’m worried about anxiety and fear rising, and that’ll be real,” Casey said. “I’ll be in quarantine, so my ability to directly respond to it will be limited to screens, so that makes me feel a little nervous.”

Adjusting social functions in order to maintain a safe environment on and off campus is one of the Task Force’s goals. Holm says the intent is to provide students with a semester as close to the norm and as devoid of COVID-19 cases as possible. However, if there is a situation in which a larger portion of the student population is infected, the University’s ability to stay open will falter.

“We would anticipate that there will be some cases on campus. If people are abiding by the guidelines…. I think that we can largely control a handful of students that test positive and operate as usual,” Holm said.

Concerns about student physical health overlap with those surrounding mental health. Senior Bergen Banta has taken the initiative to spearhead exercise classes in an attempt to improve student wellness throughout the quarantine period.

“I’m hoping these classes will be a release for a lot of tension, stress and anxiety that we will all be feeling those first two weeks,” Banta said.

Banta is currently structuring virtual classes for students unable to leave their residences during quarantine. However, providing it is allowed, Banta hopes to be able to have two to four classes done outdoors during scheduled outdoor activity time. For students struggling with mental health during this period, Banta said that it’s important to pursue new things.

“This summer, I bought a sewing machine and have been practicing making my own clothes in my free time. Pull the trigger and do something you have always wanted to do,” Banta said. “There’s literally nothing stopping you.”