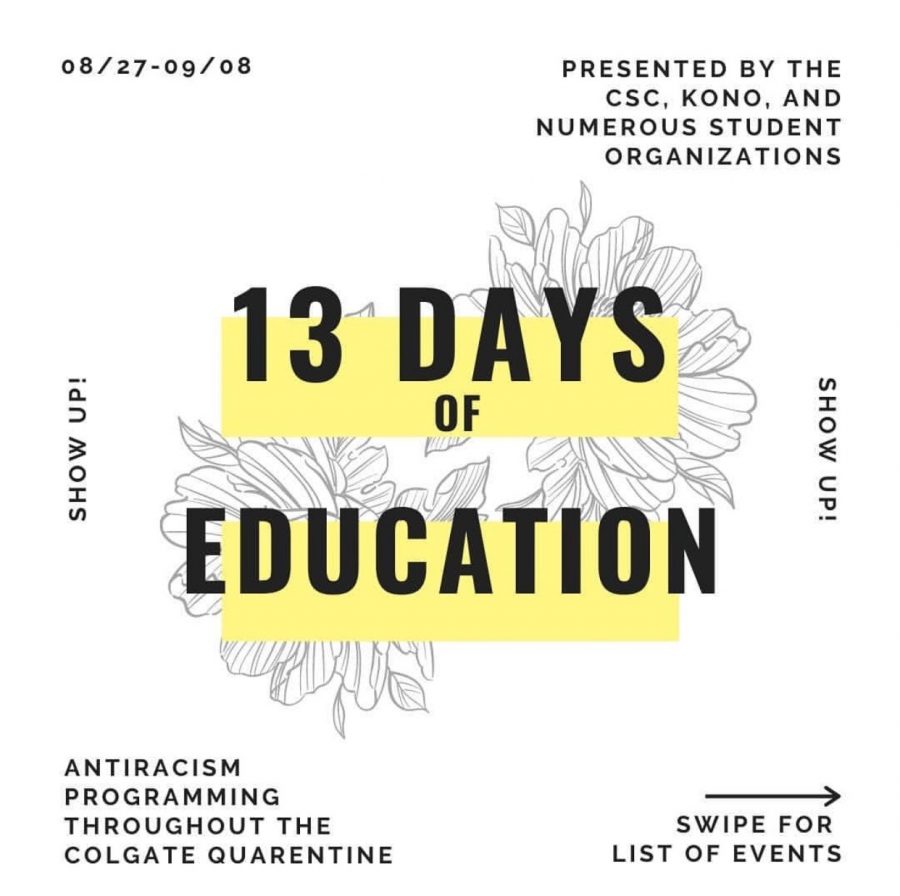 The 13 Days series began with a virtual anti-racist art-making event and includes other events, including lectures, discussions, panels and film screenings. While Konosioni co-president senior Jailekha Zutshi said that the virtual art-making event would have most likely been better in person, she pointed to some advantages of virtual programming.

“For our speakers, it’s much easier to get funding because of COVID-19 just because we don’t need to fly them in. They don’t need to stay somewhere. That’s just so much money overall,” Zutshi said. “Technically, we also wouldn’t have had this if there hadn’t been a universal quarantine.”

With a general focus on anti-racism, the 13 Days of Education comprised events that focus mainly on Black and Indigenous communities.

“We don’t want to retract or draw attention away from the racism against Black and Indigenous communities because historically, and shown by this summer, they face systemic racism to much more severity,” Konosioni public relations director senior Justine Hu said. “So the other events with different POC groups also focus on allyship while examining the relationship between our communities.”

Junior Trixie Yoo expressed concerns over limited participation from other POC communities in the series. While the 13 Days programming included an event co-sponsored by OASIS+, SACC and other groups on anti-Blackness in different cultural communities and regions, Yoo said she felt the need for a space specifically dedicated to Asian, Asian American and Pacific Islander communities (Asian/AAPI) in the series.

“The exclusion of an [exclusively] Asian/AAPI space, lumping various cultural organizations together in one single event, withholds an opportunity to illuminate the vast diversity of the AAPI community, effectively contributing to the notion of a homogenous Asian identity,” Yoo said. “I felt that the context of this year made it necessary for Asian/AAPI students to have a space to unpack the complexities of our privilege and our role in fighting institutional and ideological racism.”

Upon receiving this feedback, Zutshi acknowledged its validity, expressed hopes to provide more spaces for more POC groups in the collective anti-racism efforts and explained the logistical difficulties the student organizers faced in the programming of the 13 Days series.

“We agree,” Zutshi said, “and we are hoping to have very intersectional conversations, so hopefully this semester we will have those. But just because it was so last minute, we want to have one specifically on white allyship.”

Although Konosioni proposed the series programming in July, as confirmed by Chief of Staff to the President Hanna Rodriguez-Farrar, Zutshi said the students had to work on a tight timeline as plans were unset for an extended period of time.

“We’ve been solidly working on it for probably the last three … weeks, which is a really tight timeline. So a lot of people have also said they can’t be part of our event just because it was last minute,” Zutshi said.

Despite logistical difficulties that affected the variety of programming, many of the events have received higher-than-expected attendance and engagement. The opening art-making event had about 70 attendees, and Princeton Professor of African American Studies Ruha Benjamin’s keynote speech on technology and racism reached an attendance of 266 Colgate members.

“Students really enjoyed the talk,” Professor Taylor said. “I think that participating in outside-of-class talks centers students’ intellectual agency and reminds them that they’re a part of an intellectual community that goes beyond the classroom and the university.”

Senior Dani Robinson, a student in Professor Taylor’s class, appreciated the different disciplines and aspects of racism addressed by the various events.

“Professor Benjamin’s talk was a really inspiring talk. It brought up a lot of perspectives I hadn’t thought of, like how architecture can be harmful to certain groups and how technology isn’t always unbiased,” Robinson said. “In general, although the events were all focused on race, each brought about a different aspect of how important it is to understand that race is still a problem. And without recognizing that there are underlying problems of racism, there is little hope for a better future.”

Senior Allie Campana found it helpful that the 13 Days series was led by Colgate students.

“Since the events are student-led, they understand the problems that are unique to our campus, and the solutions that would work for us,” Campana said.

According to Zutshi, student organizers are incorporating multi-disciplinary events into the series to facilitate participation of students from diverse disciplines.

“In effect, the series invited the different disciplines to be in conversation with students about the role the specific discipline can play in dismantling racial inequality and anti-Black racism in particular,” Depenbusch said. “It provides us all with tools and analyses—drawn from across disciplines—that allow us to better understand this moment. Better understanding leads to better decision making, in the present and in the future.”

While receiving largely positive feedback from speakers and participants, 13 Days of Education struggled to reach a diverse range of audiences, according to the organizers. This occurred despite the student organizers’ efforts to communicate with departments and advertise on Instagram.

“For a lot of the smaller events, it’s mostly people who usually show up, people who need to be there the least,” Zutshi said. “We didn’t have much support from the admin in terms of outreach, so there are just a limited number of things we as students can do.”

While the student organizers pointed to CLSI Director Drew Harris and Dean of Students Dorsey Spencer Jr. for lending great support to 13 Days’ programming, they also expressed wishes to receive more support from the Colgate administration besides funding and help finding other speakers when original plans fell through.

“Beyond the occasional ‘congratulations’ for pulling off 13 whole days of anti-racism programming, the administration hasn’t done much for us,” Konosioni Vice President Jake Gomez said. “We explicitly asked the administration to hold faculty and staff accountable and highly encourage attending our programming. In reality, I could count on two hands the number of faculty and staff that I saw in the audience at our events.”

“I wish the Colgate administration was just more involved,” CSC Internal Affairs Liaison Haley Taylor said. “Having student run initiatives is great because it lets the students dictate what they want/need, but it’s also a ton of work and in addition to clubs/athletics, coursework, jobs and other commitments. And I think having admin offer more resources would have gone a long way to alleviate the pressure and still ensure it was a great 13 Days.”

Though undoubtedly significant and rewarding, the 13 Days series demanded a great deal of labor from student organizers.

“I literally took one day, I took one Sunday just for email. And I think the next day, I was up until 3:30 a.m. just dealing with emails. I still didn’t finish,” Zutshi said.

“I think I haven’t had a full ‘day off’ since sometime in June or July? Can’t remember,” Gomez said, “I haven’t gotten a real break, and that goes for several other Konosioni leaders.”

When asked to speak about the decision to make 13 Days of Education a student-led series, Rodriguez-Farrar pointed to the potential Colgate Administration saw in student-led anti-racism efforts.

“The Coalition did such a wonderful job this summer, it seems only natural to have students continue to lead this particular effort,” Rodriguez-Farrar said. “Faculty and administration can and will support the work, and the students are best positioned to identify the best ways to engage their fellow students.”

Impressed by CSC’s success over the summer in uniting different student groups, programming and fundraising, Rodriguez-Farrar also spoke to the significance of 13 Days of Education to the Colgate community.

“To develop another 13-day effort during the quarantine was a wonderful way to deepen the summer efforts, but also engage more students who may have missed the work in June,” Rodriguez-Farrar said.

Colgate administration, faculty and students have all expressed hopes to continue Colgate’s anti-racism efforts and to extend the impact of 13 Days of Education.

“How do racist events keep happening? I think the 13 Days is a way to address that there is a lot of learning to be done and to make a way to start that education process,” Haley Taylor said. “None of our anti-racism learning processes ends here. We’re part of a community that is unsafe for a lot of students, and the Colgate community [has] a responsibility to recognize that, own up to it and find ways to fix it.”

“It’s quite ironic that students are getting swiftly and rightfully kicked off of campus for putting our community’s well-being at risk; yet the well-being of BIPOC students on this campus has never been a priority, especially when, say, a white professor who regularly makes racist comments, traumatically demoralizing students, is allowed to keep teaching,” Gomez said.

According to several Konosioni leaders, Konosioni is already working towards forming a partnership with Hamilton Anti-Racism Coalition and hosting future brown bag events. One such event will address and work towards changing the Honor Society’s name, “Konosioni,” a Haudenosaunee word that has been appropriated.

Rodriguez-Farrar expressed the Colgate administration’s will to continue its support for student organizations’ anti-racism efforts while pointing to other university programming and decision-making to combat racism and promote equity on Colgate campus.

“Various departments are already doing programming along these topics. For example, WMST is hosting a fall series of anti-racism book club events,” Rodriguez-Farrar said. “The University’s DEI Plan articulates the long-term effort on these topics, and that work extends beyond programming to thinking about hiring and policies.”

Spencer, who started as Dean of Students at Colgate about three months ago, has also been working on revitalizing the Harlem Renaissance Center, as well as lending support for 13 Days of Education. He acknowledged that certain people will always say these events do not reach the right people, however he disagrees.

“Even if someone does not attend an event, there is a very good chance that someone they know did, and the lessons learned can then be part of a peer-to-peer conversation that may have never taken place had we not offered these experiences,” Spencer said. “It is important to not only educate those who attend these events but to also empower and support them in having tough discussions and making positive, sustainable change in their residence halls, student organizations, sports teams, the Colgate community and beyond.”