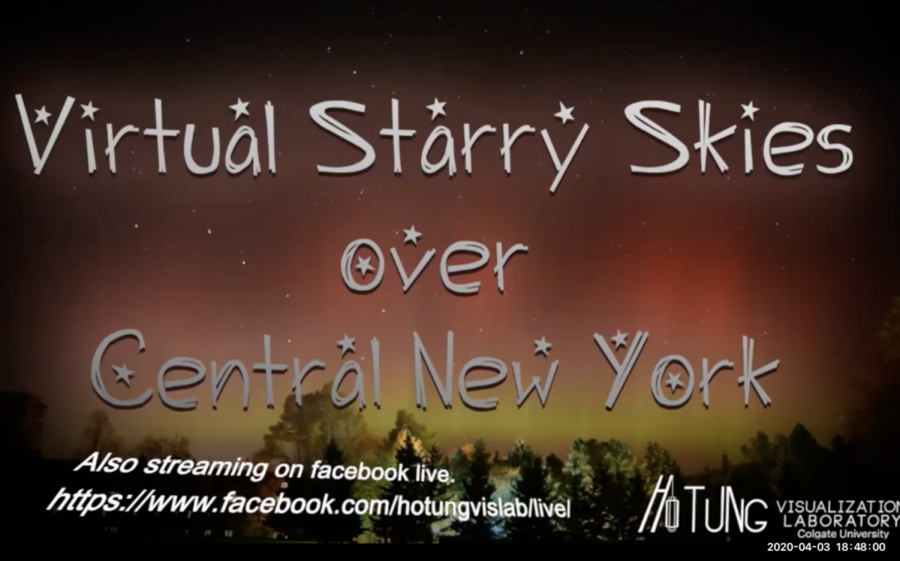 While the furthest planets in the solar system may be billions of miles away from Earth, it is still breath-taking to visit them remotely while remaining on Earth. By adapting the spectacular event Starry Nights in Central New York to a virtual format on Sept. 4, staff and students at the Ho Tung Visualization Lab (VisLab) gave Colgate a chance to experience the solar system and beyond—all while sitting at their desks at home. A booming narration, beautiful graphics and fascinating astronomical facts created an enrapturing experience for all attendees.

The show began at the center of the solar system—the Sun. The narrator explained how the Sun, while seeming impressive to us on Earth, is really a star of middling size in the universe, falling on the small side of stars. After students explained all the different types of celestial bodies in the solar system, which are held together by the gravitational pull of the sun, they discussed comets, asteroids and dwarf planets. Afterward, attendees took a virtual trip to all the planets in the system, guided by a narrator who provided helpful facts about each planet’s geography, atmospheric composition and formation.

Next, they took the audience to Jupiter. The planet is massive—so massive, in fact, that it can accommodate all of the seven planets in the solar system inside it with room to spare. Jupiter’s surface is filled with giant storms, and to get an idea of how big the planet really is, The Red Spot—a Jupiter storm—is wider than Earth. While Saturn is the planet many think of when prompted about circumnavigating rings, Jupiter has rings too, but they are made of dust instead of ice. These facts added to the beautiful visuals of Jupiter. This style of presentation handed audience members a trove of enchanting information to their senses.

‘Virtual Starry Skies’ was a virtual adaptation of regular VisLab programming. The Technical Director of the VisLab Joseph Eakin and the powerful narrator for the virtual trip, explained that the adaptation wasn’t easy.

“The transition was fairly difficult because I am used to having a live audience to react to. Virtually, you do not get a sense of the room so you never know if you are putting people to sleep or keeping their attention,” Eakin said.

While the virtual format has its challenges, it also ensures Colgate doesn’t lose its programming during times of crisis. Virtual programming helps retain a sense of community and normalcy among students and staff alike; events don’t stop just because students can’t meet or gather in large groups. After attending the event, sophomore Hieu Do shed light on the importance of these programs.

“I think virtual events are necessary. It brings people together without actually bringing them physically together,” Do said. “Plus, it was a much-needed break from this stressful quarantine.”

This isn’t the last of ‘Virtual Starry Skies’ at Colgate.

“We will have these shows every week, during Friday evenings at 7:00 p.m. Students will be taking over the shows and presenting their own versions throughout the semester,” Eakin said when asked about future events.

The next event is scheduled to take place on September 18.