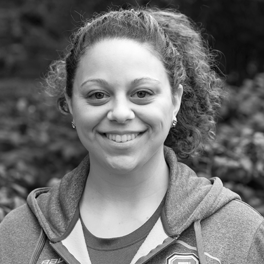 Colgate’s campus reopening during the COVID-19 pandemic took months of intense planning and the compliance of the entire Colgate community. Colgate created a unique system in order to minimize the spread of the respiratory virus during the fall semester. One vital part of the university’s reopening plan was repeated testing for students both before and after moving onto campus. This required the help of dozens of Colgate staff members who facilitated COVID testing tents where almost 3,000 students were tested in two days. One such member of the Colgate community that aided in the testing of students is Jillian Austin, an Athletic Trainer with Colgate Athletics. Austin works in the athletic training room to conduct pre- and post-practice physical therapy for athletes.

Jillian Austin and the other athletic trainers were told early on that they would be needed for testing days.

“Considering the jobs assigned to the Physical Education, Recreation, and Athletics (PERA) division were a lot of manual labor of moving boxes or delivering meals, I was happy to do something that fell more within my healthcare skill set,” Austin said.

Other volunteers through PERA agreed to work within the testing tents because they felt safe with the precautions Colgate had taken.

“Those in the front of the tent were volunteers from PERA and other parts of campus, and their assignment to the tent was solely based on their comfort and willingness to work that job. I do want to mention, PERA really stepped up these past few months all around campus, not just in the tents, and although it was somewhat expected of us, we have all been more than happy to do our part and have [the students] back,” Austin explained.

The volunteers completed training prior to executing testing protocols on campus.

“The athletic trainers and the health center staff had a training day where we learned what our jobs would be during testing, specifically jobs in the ‘back of the tent,’ which included ordering tests and directing administration of the tests,” Austin said.

Training occurred in person two weeks prior to the return of students. Each volunteer conducted the test on themself to experience the test and ensure a negative result before beginning student testing. As trained healthcare professionals, the athletic trainers and health care staff had already received personal protective equipment (PPE) and OSHA safety training. Safety equipment was also provided by Colgate for volunteers.

“Those in the front of the tent (symptom screeners and those at the sticker table) didn’t require any training, but they were also tested a week prior to student testing,” Austin said.

Austin was expected to volunteer because she is a healthcare professional.

“My job as an athletic trainer isn’t always seen in that light, but we are ready and able to help when we are called. This was one of those moments. I think many of us were happy to be back in a health care setting,” she said.

Austin expressed her level of comfort in facilitating student-testing.

“I felt safe because anyone that had a positive result during their at home test was asked not to return until after a quarantine, and I also was covered in gloves, a mask, goggles and a face shield,” Austin said.

She admitted that the tent felt overwhelming at times, but the work was ultimately worth it.

“Hands down the best part of being in the tents was seeing all the students return to campus. I could see the excitement in [their] eyes when [they] would see a friend from afar… I found myself getting excited when I would see an athlete that I haven’t seen in five months even from six feet away and in masks,” she explained.

Austin felt relieved to have a sense of normalcy in Hamilton and with the return of the energy the student body brings to campus. And despite the uncertainty, she remains positive about the semester.

“Personally, I think there is still so much unknown about this virus and the ‘best’ way to keep everyone safe, but I do think Colgate has done a great job listening to the evidence and the experts to [find] a way that should work for us,” Austin said.

She emphasized the advantage of Colgate’s unique geographic location and small, rural community amid the pandemic.

“I think if it works anywhere, it should be here. The situation is continuously evolving and Colgate is willing to evolve with it which is key in keeping everyone safe. I think if everyone does their part, we are in a great position for this to work and for everyone to be safe, but it is up to all of us,” Austin said.